There's really no other way to read into what happened on Canada Day than that. The Toronto Maple Leafs went into the two weeks after the Stanley Cup final if not hell-bent then at least incredibly determined to trade their top scorer.

Even if the return was underwhelming. As it was.

Kasperi Kapanen is a fine prospect. You always want to add first-round picks, too – although preferably they wouldn't be as heavily lottery protected as the one the Leafs got from Pittsburgh is. And who knows on Scott Harrington, a 22-year-old defensive prospect whose career screams NHL-AHL tweener?

But combined with the fact the Leafs (a) will have $8.4-million of Kessel's salary on their cap the next seven years and (b) that they threw in a second-round pick and (c) that they didn't get one of the Penguins top two prospects (defencemen Olli Maatta and Derrick Pouliot) and (d) they paid Kessel's $4-million bonus on July 1, well, let's just say the return here was not substantial.

They gave and gave and gave until the Penguins got their choices on nitpicky conditions to protect the picks and salary dumps to help their cap situation.

There's little indication Toronto tried to work with Kessel and expand his no-trade clause, as they had with other players late last season.

There's little indication he was shopped extensively to all 29 other teams, using the media to drum up interest, which hasn't been Shanahan's style.

He's an anomaly – an odd duck that has such remarkable natural athletic gifts that for him succeeding was never about the typical "look like you care" mentality that permeates hockey.

Kessel cared, but he cared in his own weird Kessel way. He wanted to win, but he wasn't the kind of player who could bleed on the ice in an obvious lost cause – like the end of last season – night after night.

But he was beloved by a lot of his teammates in Toronto because they could see something there in his awkward silences and occasional jokes. They could also see his incredible talent, every day.

"Any sport you want to play him in, he'll beat you at," teammate Joffrey Lupul once said.

Did Phil Kessel have some flaws as a Leaf? Did he deserve some blame? Absolutely.

But he also never should have been set up to be more than what he was, which is a quiet, unassuming winger who isn't good defensively and who can score goals better than almost anybody on the planet.

He bombed his draft interviews; he slipped to fifth, despite having the point totals of a No. 1 overall pick.

He was always a bad fit for Toronto – and especially for this Toronto: a talent-bereft team that became mired in a mindless non-rebuilding rebuild, one without a proper No. 1 centre or No. 1 defenceman and built heavy on wingers without defensive ability.

He was the centrepiece of a team with no centre, no real direction or future.

That he kept producing in that mess is part of the anomaly; that he was expected to do any more than that, given his background, is absurd.

"I said to him 'You need to be a well-rounded player,' " said David Quinn, Kessel's coach with USA Hockey in those early years. "He looked at me with this bewildered look and said 'Well I'll just go out and get another goal.' "

It would have been fascinating to see Mike Babcock try to work with him next season, to have one of the undisputed top coaches in the game attempt to reach Kessel in a way no coach ever has.

In a lost season, with nothing to lose but games the Leafs won't care they lost, it could have worked. It also could have been a disaster, with in-fighting and benchings and all kinds of sordid headlines during what will already be a trying year next season.

Shanahan thinks he does. He spent a year watching Kessel, inside and out, and like many in the hockey world, he wasn't impressed. Kessel didn't fit what he was looking for, despite all the goals, and he certainly didn't answer his challenge in midseason when Randy Carlyle was fired.

Shanahan asked his team to show him their character; they turned in one of the worst performances in recent NHL history, ultimately winning 11 of their final 51 games.

Predictably, Kessel didn't rah-rah them to another empty 85-point season that would have – in the long run – been more catastrophic than the catastrophe that actually unfolded.

"This wasn't about singling out one guy or trying to pin the blame on one guy," Shanahan said on Wednesday.

That's true – it's not. Others will be thrown overboard with far less fanfare. But since he arrived six years ago, Kessel has always been the man atop the pyramid in Toronto, the player expected to drive a terribly run team's hole-filled roster to greater heights.

But that's not what he is.

That's never what he was. 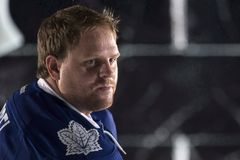 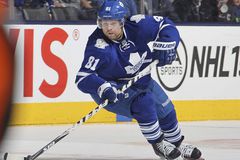 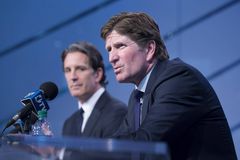