An anxious Dion Phaneuf shifted his weight back and forth, from foot to foot, as he waited for the question in the visitor's dressing room.

When it came, after another difficult loss for the Toronto Maple Leafs, the captain refused to answer.

With only one game left in the Leafs' lost season, the comment created a small buzz among the fan base – "Monday? What's on Monday?" – but it has quietly become the go-to line from the team's leadership group this week.

Tired of questions about their collective failure and uncertain futures, many players are deferring comments until their final media availability, when they clean out their lockers and face a wall of cameras and reporters at the Air Canada Centre.

There will be scrum after scrum and plenty of probing questions.

Leafs president Brendan Shanahan will also break his lengthy silence that day. He's likely to face some difficult questions of his own from the gathered horde about a year that ended disastrously, with the Leafs winning only 11 of their previous 50 games heading into Saturday's finale against Montreal.

Rather than picking through the ashes of what went wrong, however, what most will want to learn is: Where is this going?

And, in the case of the players, do they want to be a part of it?

The Leafs are in for some challenging days ahead on the public-relations front, something they've countered with a few feel-good stories in recent weeks.

The latest came on Thursday morning when they recalled Colton Orr, the 33-year-old enforcer who has been mired in the minors all year.

He has scarcely played in the AHL this season, and this will likely be his final game of professional hockey.

"It's going to be a little emotional," Orr said.

With the franchise at a crossroads, Orr's reappearance this week is fitting. His signing – to a four-year, $4-million (U.S.) deal on July 1, 2009 – was one of the first by former GM Brian Burke, whose fingerprints remain all over the core of the roster Shanahan is now expected to dismantle in the coming months.

It was ground zero for that rebuild-that-wasn't-a-rebuild, the first (minor) error in a string of miscues to come.

Over the years that followed, those mistakes helped put the organization in its current predicament.

Next to Orr, the only current Leafs that were around for Burke's first full season are Phil Kessel, Tyler Bozak and Phaneuf, who are – along with Joffrey Lupul – expected to be the main pieces dealt in the off-season.

So while Saturday's game against Montreal will be billed as Orr's finale as a Leaf, it could well be the end for all of them in Toronto, capping an era that began with the high-profile free-agent signings of Orr, Mike Komisarek and François Beauchemin nearly six years ago.

The next season, the Leafs finished second last – without their first-round pick – in an ominous start to it all.

But if Saturday is the unofficial endpoint of the team that Burke (and Dave Nonis) built, then Monday will be the start of the next chapter. Shanahan, who has remained largely out of the spotlight, will be put on the spot and compelled to explain his vision for what's next.

The good news is he hasn't traded his first-round pick, which is likely to be the organization's first selection higher than fifth overall in 26 years and a cornerstone prospect the Leafs can build around in the years to come.

The bad news is it's an incredibly long road ahead, and the assets the Leafs have to peddle have been damaged in the carnage of the past few months.

But Saturday marks one year since Shanahan was hired by the Leafs, in the wake of a collapse that shook the organization into change.

One year later, it's long past time he gets to work on clearing out the mess that came before. 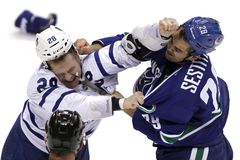 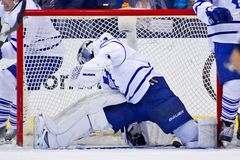 Morgan Rielly’s rise one of lone positives out of Leafs lost season
April 1, 2015 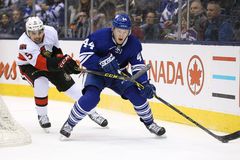 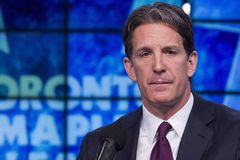