Randy Carlyle is only 1-4-1 since taking over for Ron Wilson two weeks ago Friday, with his team labouring to put the puck in the net with just 11 goals and an embarrassing 196-minute scoring drought.

The relatively friendly fellow that first joined the organization, meanwhile, has begun to get progressively grumpier, with Tuesday's 5-2 loss to the Florida Panthers setting him off in his postgame address to the players.

"My message was we self-destructed," Carlyle said.

This is the Randy Carlyle the Anaheim Ducks grew to know over his six-and-a-half mostly successful seasons there.

And should the Leafs keep flat lining – as they have in losing 15 of their last 17 games – they'll see a lot of this grim fellow the rest of the way.

"There is no point sugar-coating things," defenceman Luke Schenn said on Wednesday as the team took an off day in Tampa. "He was honest with us. Sometimes it's a little hard to take but that's fine. In the end, the coach doesn't need to come in and tell us. Everyone in that room knows."

"The coaching staff has been great," added Mike Komisarek, who has played more than 17 minutes a night and dressed for all six games under the new coach. "[Carlyle]knew what was going on before. He knew there were confidence issues with the team, and he's reacted accordingly."

Those here at the GM meetings who know Carlyle well say sugar-coating isn't in his vocabulary and that he isn't afraid to speak his mind – even to his superiors – which should create an interesting dynamic in the off-season.

Expect Leafs GM Brian Burke to get a very frank assessment of what he has on this roster from his coach, with recommendations of who should stay and who should go.

What's clear at this point is that Toronto needs to again turn over a large portion of its roster, as far too many players are earning more salary than is justified by their contributions.

This latest 2-13-2 slide has also illustrated just how mentally fragile a group this is, one badly in need of players with more playoff and big game experience and for whom excuses like the "pressures of the trade deadline" don't apply.

The (very) early returns on who Carlyle has liked, based their ice time, include Mikhail Grabovski, Clarke MacArthur, Matt Frattin and Carl Gunnarsson.

MacArthur, in particular, has had a healthy boost in playing time, picking up an additional four and a half minutes a game than his season average over the last six games, something helped no doubt by the absence of Joffrey Lupul (separated shoulder).

Those in the doghouse can often be seen sitting in the pressbox, meanwhile, with Cody Franson's ice time under Carlyle so far amounting to just 45 seconds when he suffered an eye injury early in the only game he's dressed for.

(Carlyle has referenced practice habits when it comes to deciding who goes into the lineup every night.)

Minutes are also down for Matt Lombardi, Luke Schenn and Joey Crabb, with Lombardi taking the biggest cut down to under 10 minutes per game.

That's not to say that's who stays and who goes. It is early yet, after all, and Carlyle still has 12 games to turn up the heat on his roster.

Making the playoffs is all but impossible at this point, which leaves him with the task of starting training camp six months early and seeing who'll respond to his methods.

Right now, with the team's confidence so low and the group playing this poorly, the answer isn't clear.

By next month, however, the Leafs should have a much better idea of what pieces they should salvage from this train wreck of a finish.

Leafs fall in Florida as slide to bottom of league continues
March 13, 2012 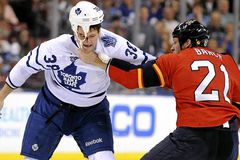 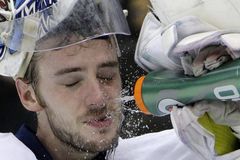