David Quinn can't help but chuckle when he pictures Phil Kessel in Toronto.

Bright lights. Plenty of cameras. And all those questions coming at him.

His former junior coach remembers Kessel as an implausibly shy 16-year-old who dominated on the ice yet was always at a loss for words when asked to talk about his play.

In that respect, not much has changed. Eight years later, Kessel is the on-ice face of the Maple Leafs and has become something of a silent star in Toronto.

He tends to avoid attention, often escaping the dressing room before the media horde arrives. Kessel usually appears when summoned but the ensuing process can be painful, as he typically offers a few short sentences while slowly inching away from the cameras.

"I would imagine he's uncomfortable," said Quinn, who coached Kessel with the U.S. development program, the world juniors and world championship.

"Hands in his pocket, looking down at his feet."

"The last thing he wants to do is talk to 40 people standing around with microphones. He'd rather go out and play video games and eat Skittles."

It is a curious marriage, this pairing of the shy 6-foot, 200-pound forward from a small city in Wisconsin with the hockey nuthouse that can be Toronto. Yet, somehow, it is working. At 24, Kessel ranked third in the NHL's individual points race before Friday's action, going into Saturday's game in Winnipeg against the Jets. He is showing every sign of turning into a perennial all-star and winning over teammates, coaches and fans.

He has, in many ways, grown up. And in the process, Kessel has found a home in the last place one would expect an introverted NHL player to thrive. Despite his persistent unease with media attention, he leads all players in public voting for the all-star game to be played in Ottawa in January.

"Phil always had that talent that was unmistakable," said Kessel's younger brother, Blake, a defenceman in the Philadelphia Flyers system. "He had the stickhandling, the moves – everything like that. He's always been that player at the top."

According to those who know him well, Kessel comes by both his athletic talent and his reserved personality naturally.

He is, they say, the spitting image of his old man.

"They're extremely similar," Blake Kessel said. "They're quiet people, and people misunderstand that sometimes, but those two have been really close. They are kind of the same person – it's scary sometimes."

Roughly 30 years ago, Phil Kessel Sr., was a quarterback at Northern Michigan University, where his quick feet and good hands convinced the Washington Redskins to take him in the 10th round of the 1981 NFL draft. After brief stints as a backup with the CFL's Calgary Stampeders and USFL's Birmingham Stallions, he returned to Wisconsin to raise a family.

When the Leafs had a road trip with all of their fathers earlier this season, Kessel's teammates were struck by the resemblance between the two Phils.

"It's crazy," teammate Colby Armstrong said. "They're really kind of the same guy. It was cool to go for dinner with both of them; it was like sitting next to twins."

In addition to taking after his dad, Kessel landed a great hockey mentor as a youth.

Enrolled in the sport as a four-year-old after his parents saw his cousin, David Moss (now of the Calgary Flames), play as a youngster, Kessel was coached throughout minor hockey by Bob Suter, a defenceman with the Miracle-on-Ice U.S. team that won a gold medal at the 1980 Winter Olympics in Lake Placid, N.Y.

After his playing career Suter had become the dean of hockey in Madison, Wis., where a pint-sized kid named Phil with a penchant for scoring goals would show up at his rink.

Kessel excelled from the beginning, outperforming his family's wildest expectations and putting himself on a fast track to the next level. At age 14, Kessel scored 176 goals in 86 games to lead his bantam team to second place in the national championships. At 15, he joined Quinn as one of the youngest players with the U.S. national development program in Ann Arbor, Mich.

At first, Kessel was initially intimidated by the move seven hours' drive east of his hometown. He grew increasingly comfortable after recognizing his skating skills and offensive talent set him apart.

"I don't think it took him too long to realize he was going to be the best player in the national program," Quinn said.

The trick, however, was to get Kessel to venture into the defensive end of the rink. Quinn remembers one key game at the under-17 world championship where, after scoring two highlight-reel goals, Kessel failed to back-check and gifted the opposition with a scoring chance. The next day, he told the talented teen that he needed to play harder at both ends of the ice – a conversation that a succession of coaches would have with him.

"A guy beat him up ice – nobody should ever beat Phil Kessel up ice the way he skates – just because it wasn't that important to him," Quinn said. "I said to him 'You need to be a well-rounded player.'

"He looked at me with this bewildered look and said 'Well I'll just go out and get another goal.' "

Because Kessel was born only two months after Sidney Crosby, the comparisons were inevitable. Many in the game even predicted they would go first overall, back to back, in 2005 and 2006.

In his draft year, Kessel put up 51 points in 39 games as the second youngest player in Division I college hockey. His ice time, however, declined at the University of Minnesota, and he struggled at the 2006 world junior tournament.

Even more troubling, the NHL teams picking high in the '06 draft weren't sure what to make of this peculiar kid from Wisconsin. Kessel struggled through pre-draft interviews, relative to more polished personalities such as Jonathan Toews and Jordan Staal.

While Crosby went first in 2005, the St. Louis Blues picked defenceman Erik Johnson out of the U.S. development program a year later. Kessel, despite holding the program's career records for goals and points, and having finished sixth in NCAA scoring as a rookie, fell to the Boston Bruins with the No. 5 pick.

"We weren't sure about him," recalled one senior scout whose team passed on Kessel. "He was a little immature. What we gathered, and I don't know him that well, but he didn't seem like a very likeable person. I'm not sure about that, but that was the knock against him then."

And that talk stayed with Kessel as he made his way to the NHL.

A HOME IN TORONTO

Kessel lasted only three seasons in Boston. He didn't fit in with a veteran dressing room and an old-school coach in Claude Julien.

In the 2008 playoffs, after he'd scored 19 goals with 18 assists and led the NHL with five shootout-deciding goals in the regular season, Kessel was consigned to the press box as a healthy scratch for three consecutive games against the Montreal Canadiens.

A year later, the Bruins had seen enough of his one-way game, seemingly aloof approach and resistance to changing his ways.

A high-profile trade in 2009 that involved three high draft picks going the other way brought him to Toronto. General manager Brian Burke bet big – with a five-year, $27-million contract – that Kessel would mature into the player scouts first saw in that high-flying 14-year-old.

And while it's taken more than five years since he was drafted, Kessel is beginning to make that transformation happen. Now in his third season under coach Ron Wilson, he has improved defensively, turning in more nights as that well-rounded player Quinn had encouraged.

Kessel, who lives in Toronto with his long-time girlfriend Brittany from Madison, has also integrated smoothly into the Leafs dressing room, becoming friends with captain Dion Phaneuf, Tyler Bozak and Armstrong over the past two years.

More than simply being a reclusive goal scorer, his teammates now all know Kessel as an ace golfer (with a seven handicap), table-tennis champ, football fan and a poker player.

His latest nickname, "Big Tuna" – because of Kessel's appearances in tuna commercials during recent games – is also starting to catch on.

"He's a real easygoing, good-hearted guy," Armstrong said. "He's a simple guy: What you see is what you get. I know he comes across as a quiet, shy guy, but when he's around us, he's just a regular guy."

Kessel's family, meanwhile, has seen a remarkable transformation since the trade to Toronto, as his work ethic and dedication in the off-season seem more determined than ever.

"He couldn't be happier with the situation he's in right now," Blake Kessel said. "He loves feeding off the passion of people. He's really excited to be in a spot like that, where fans are so into every game …

"The only thing he has focused on the whole year is winning, basically, and getting the team back to the playoffs. That was his main goal this entire summer."

Quinn isn't surprised to see Kessel make good on the talent that was always there.

"I think all young players need to overcome their personalities," he said. "I deal with that every day at the American League level. Some guys just grow up later than others." 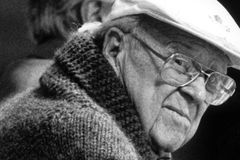 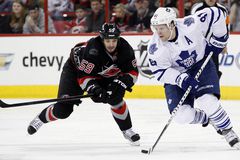 Kadri making most of promotion to Maple Leafs
December 29, 2011 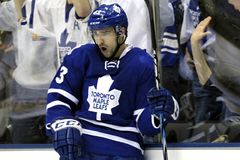 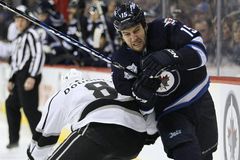 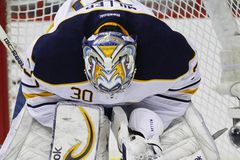