It was exactly one month ago when Toronto Maple Leafs coach Ron Wilson stepped to the podium, set to give his customary postgame press conference after his team had lost 2-1 at home to the Boston Bruins.

He had a few stern words for the gathered media when it came to the rookie goaltender who had played so well in that defeat.

"There's all this [attention]around here, a guy wins a game and we're ready to build a statue for him," Wilson barked. "Let the poor kid just kind of relax and focus on his game. Period. Like you would in every other damn city in this league. 'Cept here."

Only a month later, there's no statue - although portions of the crowd, media and fans alike, have plaster at the ready.

Nine games into his NHL career, James Reimer has continued from where he started, and in Toronto in a season where almost every young player has failed to live up to expectations, the expectations are building for a 22-year-old goaltender who was firmly in third or fourth spot in the organization's depth chart to start the season.

Suddenly the cheery youngster from a tiny town in rural Manitoba seems to be part of the solution for a franchise that hasn't had much luck in goal, this season or any other in recent memory.

Reimer picked up the first shutout of his career on Thursday night, blanking the Carolina Hurricanes in a 3-0 win his teammates controlled through the early stages but in which the rookie had to be sharp to keep the opposition off the scoreboard over the final 25 minutes.

Afterwards, Wilson again attempted to keep things in perspective, muting his praise despite the budding optimism over his young goaltender.

"He did a great job, but I thought we did a great job in front of him, too," Wilson said. "We made it probably the easiest game for one of our goalies this year. But he made a big save at the end of the second period on the breakaway and one save I think on the 5-on-3 and a few saves at the beginning of the third period.

"But he smothers every rebound, he seems pretty confident when he's in goal, that's a positive for us and for him."

The coach hardly sounded like a man overjoyed with the big win, swept up in the moment of Reimer's latest triumph, but then again, that's Ron Wilson. Sometimes, inexplicably, chipper in defeat; other times, just as surprisingly, caustic and critical when his team pulls out a victory.

Perhaps it's all due to the fact Wilson has seen this show before, that he's been behind the bench for a terrific stretch from a young goaltender only to see it go sideways, as can be the case at the position.

He was, after all, in San Jose for the heady first 30 games of Vesa Toskala's career, when the young Finn rocketed up the Sharks' depth chart and facilitated a trade that sent Miikka Kiprusoff to the Calgary Flames.

And both he and Leafs fans know all too well how things ended for Toskala.

That's not to say Reimer's a dud - only that you never often know at his position and that, more importantly, nine games doesn't make a career.

For now, however, he and his teammates are enjoying this run, a stretch in which he's posted a .940 save percentage when J-S Giguere and Jonas Gustavsson have fallen well short of the league average of about .910.

The sample size is slowly getting larger, and to say it's come out of nowhere isn't quite right, not when Reimer shone in training camp and has been solid in the AHL. Even he admitted, however, that his season with the Toronto Marlies hasn't been out of this world, that he's playing better in the NHL than he was in the minors and that everything's breaking his way.

Whatever the case, his teammates are impressed.

"He played great," winger Clarke MacArthur said. "He made some huge saves ... It's key saves at the right times. They got that breakaway in the second period, late, could have made it 2-1. You know you make a big save like that just deflates another team so it was a great job by him. He's really been battling in net."

As for managing expectations, that hardly seems a problem for Reimer, who isn't exactly your typical 22-year-old. Growing up in Morweena, Man., in a family that has transported houses since his grandfather and great uncle started the business two generations ago, Reimer said he takes after his father Harold's calm demeanour - "you never heard him raise his voice" - and that that's what had helped him stay level in goal.

He's also not your typical NHL goaltending talent given he didn't play organized hockey until age 12, in part because his hometown has a population of only 130 people. He also seems mature beyond his years, having gotten married only a few months after his 21st birthday this past summer to wife April.

"A pretty darned good year," Reimer said. "An exciting year, that's for sure."

As for on the ice, he said nerves haven't been an issue, aside from his first NHL start in Ottawa on New Year's Day.

"I think that's the most nervous I've ever been for a game," he said. "After that, things have died down and I've felt comfortable out there and been able to focus."

If they fall at all.

"Obviously I'm aware of the situation," Reimer said. "My job security up here, there isn't much of that. But as soon as I let those thoughts creep into my mind, I'm going to get nervous out there and it's going to get to me.

"I've just got to forget about it and focus on what I can control."

So far, so good on that front - and best of luck to his coach in trying to manage all those expectations as long as his young netminder keeps playing this well. 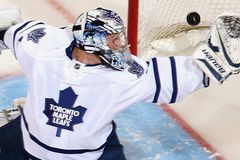