Perhaps it was a long hot day of green beer making people think they were seeing things – or maybe it was well-known leprechaun penchant for playing tricks.

Whatever, the Ottawa Senators stood an excellent chance of setting an all-time hockey record for the most shifts in the standings in a 24-hour period.

Friday night at home, they defeated the Montreal Canadiens 2-1 in overtime to leapfrog over the Boston Bruins, 84 points to 83 points, and take over the lead in the Northeast Division. This caused the Senators to soar five places in the Eastern Conference standings, from seventh place to second.

(The reason for this, despite its absurdity, is that the top three positions in the conference standings automatically go to the three division leaders, regardless of the pure mathematics of the standings.)

Saturday afternoon, when Boston defeated the Philadelphia Flyers 3-2, the Bruins moved once again one point in front of Ottawa, 85-84, sending the Senators back down to seventh overall.

Had the Senators then defeated the Toronto Maple Leafs Saturday night, they would move back in front, thereby moving a total of 15 places in the Eastern Conference standings in a 24-hour period.

That they failed to do so – losing 3-1 to the Leafs – meant they only moved a total of 10 positions in 24 hours, still considered the modern NHL record for bouncing about the standings. Ten spots – only to end up exactly where they had started.

The four-leaf clover this St. Patrick's Day game was firmly lodged somewhere in the anatomy of Tim Connolly, the usual-hard-luck Toronto forward who is better known for being on the injury list than the scoring sheet.

How Connolly scored is hard to describe. Some seven minutes into the second period, Ottawa's Erik Karlsson, the leading candidate for the Norris Trophy as the league's top defenceman, came slowly behind his own net to take a puck that had been stopped near the boards by Senators goaltender Ben Bishop. Karlsson picked up the pick and meant to tap it past Connolly, who was essentially doing a harmless drive-by, when the puck ticked off Connolly's stick shaft, bounced out toward the net and then in off Bishop as the gangly goaltender slowly returned to his crease.

Toronto's Phil Kessel scored his 35th goal of the season on a screen shot early in the third. And then Kessel set up Dion Phaneuf for a one-timer when Toronto ended up with a five-on-three power play courtesy of a slashing penalty to captain Daniel Alfredsson and a bench penalty for too many men on the ice.

Bishop faced only 18 shots as he recorded his first regular-time loss in six matches. Reimer was rarely threatened, though the Senators did manage 30 shots in his direction.

It was hardly a game to promote anything but beer sales. Much of the play was sloppy, the players' energy low. The clear highlight of the night was during the second intermission when one young woman wearing Senators paraphernalia went down on her knees and proposed to another young woman wearing a Maple Leafs Phil Kessel jersey.

Most thought it was simply another silly "Battle-of-Ontario" skit harkening back to the bitter playoff rivalries of these two teams prior to the Lockout. It was only when the two kissed and broke into tears that a rather stunned crowd realized it was no skit at all, but real life.

Of which there was precious little in the actual game.

While the tired old Battle of Ontario has been somewhat waged on the ice this season – the teams splitting their six-game series with three victories each – the stunning collapse of the Leafs this past month meant this game meant little to anything but Ottawa's Slinky-like dance through the standings.

The measure of the battle had even moved off-ice for the most part, with the 20,500 fans roughly split between Leafs blue and Senators red, though the volume of Scotiabank Place was in favour of the Leafs. Then again, the Ottawa fans had nothing to cheer for on this night.

"The games haven't been as 'truculent' as they have been in the past," Ottawa head coach Paul MacLean dead-panned prior to the match.

But this night there was "truculence," with Toronto's Clarke MacArthur and, of all people, Ottawa's Sergei Gonchar, flailing away at each other in the first period. In the second, Luke Schenn of the Leafs and Nick Foligno of the Senators fought, then Ottawa's Chris Neil and, again of all people, Toronto's Mikhail Grabovski. Neil and Grabovski both received game misconducts, Grabovski a double.

What there wasn't alas, was much of a hockey game.

Leafs will relish a win, no matter how weak the opponent
March 15, 2012 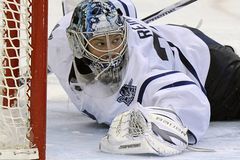 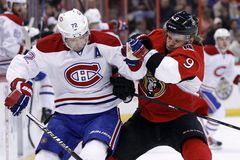 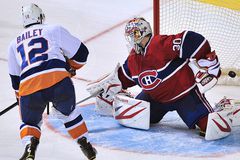