You truly won't find two NHL teams headed in more different directions at the Olympic break than the ones that met in Toronto on Saturday night.

The hometown Maple Leafs are red hot, including picking up their 11th win in the last 14 games on the back of yet another remarkable performance by Phil Kessel late in a 3-1 win.

The visiting Vancouver Canucks, meanwhile, are as low as that franchise has been in recent memory, losing for the seventh straight time and 16th game in their last 20.

For one team, the break is a potential momentum killer.

For the other, the two and a half weeks away from the nightmare are needed more than ever.

"I don't think there's anybody out there that needs it more than we do right now," said Canucks defenceman Dan Hamhuis, who recovered from an injury in time to play in Saturday's game and now for Team Canada in Sochi. "Just mentally to be away from the game a little bit and health wise too to get guys back."

"We're in a spiral so it couldn't come at a better time," added Canucks coach John Tortorella, who contritely accepted some of the blame for his team's 4-13-3 slide, part of which came during a six-game suspension he took last month. "I didn't help it with the stupidity against Calgary."

Saturday's win boosted the Leafs to 70 points on the season, seven better than Vancouver and an unthinkably high total given the funk they had been mired in back in early January.

In the last month, however, the Leafs have earned 23 points; the Canucks have picked up just eight.

And come April, it could well be that stretch that defines their seasons.

In fairness to the Canucks, they actually turned in a good road game for a long stretch of Saturday's contest. The Leafs were limited to just 13 shots – and four scoring chances, by Tortorella's count – in the game's first 40 minutes, and it appeared a late first period goal by Ryan Kesler would be the difference.

But as has been the Leafs tendency during this run, they pushed back with a flurry of offence, scoring three unanswered goals in a five minute span that won them the game.

Taken as a full 60 minutes, the argument was there that the Canucks deserved a better fate – perhaps a point or even two.

But what Vancouver lacked was a lot of high end chances, which is exactly what Kessel (who scored the winner) and linemate James van Riemsdyk (who added an insurance goal) delivered in the third.

"We had a lackluster, flat evening for a better part of the game," Leafs coach Randy Carlyle said, "and for the third period it seemed like we got more things going for ourselves. We were pleading, begging, crying – all those things – to change the way we were playing."

"It was a pretty even game I thought," Kessel added.

Part of the problem for the Canucks is just how banged up they are. In addition to Hamhuis playing hurt, captain Henrik Sedin, centre Mike Santorelli and defencemen Kevin Bieksa and Chris Tanev were all out of a lineup which is no longer nearly as deep as it was during its run to the finals in 2011.

In a stark contrast, the Leafs have been getting healthier and healthier. Toronto has fortunately avoided major injuries to both goaltenders and all of its top six defencemen the entire season and now expects centre Dave Bolland back coming out of the Olympic break.

The only bad news in the injury department was that centre Jay McClement suffered a suspected concussion midway through Saturday's game when he banged his head hard on the ice and was forced to the quiet room.

But some of Toronto's injuries down the middle have also come with a silver lining, including Carlyle's latest brainwave in moving Nikolai Kulemin to centre for the first time in his career.

Kulemin has responded with two excellent games anchoring the third line and assisted on Mason Raymond's tying goal that kick started the Leafs offensive barrage in the third period.

"There has been a bit of an unveiling of Kulemin at centre," Carlyle said. "It's been a big surprise to everybody."

Those have been the kind of subtle roster decision that have gone the Leafs way of late, including among other things a New Year's Day trade for defenceman Tim Gleason and more of a willingness from the coaching staff to ice a more talented lineup in general.

Colton Orr, for example, was scratched for the second straight night on Saturday, opening the door for Carlyle to use seven defencemen and give more ice time to Troy Bodie, who has been a revelation of his own in limited minutes.

The son-in-law of MLSE president Tim Leiweke, Bodie's signing in the off-season raised some eyebrows, but he has earned everything he has gotten this season, including his 14 minutes and an assist in Saturday's win.

Now the Leafs head to the Olympic break hoping only that all that has gone right continues to do so when they next hit the ice, at the end of the month in Long Island and over their final 22 games.

"We're happy about the last month and a half or so," Leafs netminder Jonathan Bernier said. "We've been playing really good. Now we'll take some rest and reset because the real season's coming after. We've got to be ready as a team for the next 22 games."

"We'll take what we've got right now," Carlyle said. "The message [to players] was the break is here for you to rest and relax, but you'd be well advised to make sure that you have some form of exercise taking place during the break. Because when they come back, we're going to go to work." 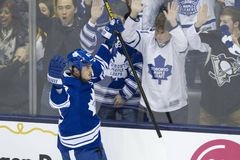 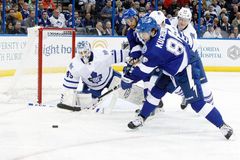 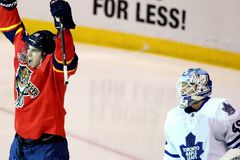 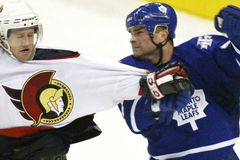