It was a little more than 10 years ago that Stuart Hyman began making headlines in Toronto.

Some called him a "minor-hockey impresario." Others were less kind to the multimillionaire real estate developer who had a unique interest in buying up kids' teams and putting well-paid coaches in charge.

The controversy gained national attention and eventually boiled over to the point that the Greater Toronto Hockey League finally intervened. The league wrested away many of Hyman's more than 90 teams from him in 2008.

"My hockey empire," Hyman said, chuckling. "That's what the newspapers called it."

Now the Hyman name is back in the news. In the big leagues.

Zach Hyman, Stuart's son, is with the Toronto Maple Leafs. One of 10 rookies who received a late-season call-up, Hyman has scored four goals and two assists in his 13 NHL games, impressing coach Mike Babcock and a fan base desperate for something to cheer about on this last-place team.

Most expected to be wowed by first-rounder William Nylander, whose offensive gifts are immediately obvious. Few figured it would be an unheralded 23-year-old winger out of college – a player the Leafs landed in a little-talked-about deal with the Florida Panthers last June – who took the spotlight.

Lest anyone think that this is simply an adrenaline-fuelled NHL audition, the reality is the more people in hockey you ask about Zach Hyman, the more you get the same answer.

He may have grown up in Forest Hill – the eldest of five hockey-playing boys – and gone to Toronto's finest private schools. He may have been driven to hockey practice in his father's Porsche and played (mostly) for his father's many teams.

He may have been the ultimate "overdog" – one of the rich kids who had every chance to succeed.

But that's not what his coaches and teammates are struck by. In fact, it's just the opposite.

Red Berenson, the gruff 76-year-old coach of the University of Michigan program where Hyman played the past four years, has dealt with his share of trust-fund kids he has had to coax to block a shot or battle in the corner for a loose puck.

At its highest levels, in both Canada and the United States, hockey is becoming a moneyed sport, Berenson explained, and he can see it in the kids.

But he never could in Hyman.

"We see quite a bit of that in Division I," Berenson said. "I think you're seeing it at all levels. It's not just that they're from privileged backgrounds. There are some kids that just expect things to be handed to them because that's how they've been brought up. That's the thing about Zach Hyman.

Hyman hasn't had a typical road to the NHL. Despite sharing the ice with stars such as Jeff Skinner, Tyler Toffoli and Tyler Seguin on his father's teams growing up, he pursued a scholarship and committed to Princeton University at 15 years old.

Four years later, his game exploded. He had 42 goals in 43 games in his final Ontario Junior Hockey League season with the Hamilton Red Wings and was chosen the top Junior A player in the country.

The NHL became a more realistic goal. When Princeton coach Guy Gadowsky took another job, leaving the program without a coach, Hyman decided to explore his options. Almost every school came calling, and he ultimately settled on Michigan – in large part because of Berenson's success turning players into pros.

But his new coach wasn't impressed with Hyman's game. For two years, Berenson played the star recruit, who had filled the scoresheet at every other level, on the fourth line and penalty kill.

He knew Hyman would make the NHL only by becoming an elite defensive player.

"He really ran into a wall here," Berenson said of Hyman, who had only 18 points in 79 games in his first two college seasons. "He expected it was going to be easier than it was. The good thing was he kept bringing his work ethic every day. We opened his eyes as to how he was going to have to play without the puck. It took him a while."

By his fourth year, the teaching paid off. Hyman rang up 54 points in 37 games last season in the NCAA, gelling with Detroit Red Wings rookie Dylan Larkin on a potent top line. Hyman was a top-10 finalist for the Hobey Baker Award as college hockey's top player. He was Michigan's male athlete of the year. And he was the first men's hockey player from the school to be named a first-team Academic All-American thanks to a nearly 4.0 grade-point average as a history major.

Eight months later, after a strong half-season with the Toronto Marlies, he was a Maple Leaf.

Hyman has already impressed many in the organization with his attention to detail. He has also become close friends with Nylander, a connection that has been apparent in their chemistry on the ice.

"He's a level-headed kid," Babcock said. "A smart kid. He does good things every day."

"It was always a dream of mine to play for Toronto," Hyman said, standing in the Leafs dressing room a few hours after scoring his first NHL goal. "I didn't know how that would happen. Everything kind of worked out."

It sounds easy, but it wasn't always. The Kid Who Had Everything was also saddled with oversized expectations as long as he could remember. Many in the GTHL dismissed him as the divisive, team-hungry-owner's son, someone not worthy of being there, even when he was one of the leading scorers.

He remembers the controversy around his father well and isn't anxious to relive it. He calls it a "misunderstood issue." But, at one point, at 12 years old, he quit his dad's team to play in Mississauga with an unaffiliated one.

He was tired of being treated differently.

"I heard some things from kids," Zach Hyman said of playing for his father's teams. "Not so much from parents – I don't think parents are going to go heckle kids – but it was pretty good [trash talk]. Whenever I did hear it, I just kind of put it in the back of my mind and went out and played hockey. What I loved doing."

"Wearing Hyman on the back of his sweater was a negative because people always looked at him a different way and discounted what he did," his father said. "But it was a great thing because it made him tougher. It made him realize you get adversity right from the beginning."

Stuart Hyman has largely left minor hockey, as he says he didn't like the politics involved. He also tries to avoid the media. But he remains proud of all the kids who benefited from the coaches he hired and eventually made the NHL, a list that includes P.K. Subban and Steven Stamkos. He believes he was ahead of the curve in "professionalizing minor hockey," something he saw a need for given what was happening in kids' hockey in the United States and Europe.

He stays involved in hockey as the vice-chairman of the OJHL and owns the Markham Royals. One son, Spencer, serves as their assistant coach. Another, 17-year-old Cooper, is a defenceman on the team.

Even as Zach has piled up goals with the Leafs, the Hymans' home remains filled with hockey sticks and bags. They have two nets out front and a garage door badly dented by years of puck damage, which the folks in their tony neighbourhood complain about.

Stuart Hyman knows he is a crazy hockey dad, but he hopes the headlines about the family in the future are about a good Toronto kid who loves the Leafs and will do anything to help his team win.

He hopes people can see his son for who he is and not what his parents gave him growing up.

"Zach's whole career has been people trying to focus on me, and it hurts him," he said. "I believe he would have made it regardless of me because he's a kid that has tremendous drive and passion. It's not about me. It's about him.

"Some people own a business and the kid grows up and he takes over the father's business. Our family business has really been hockey. Hockey's our life. He's loved hockey since he was a little kid. He's always known hockey. It's been his dream. To see him fulfill it is a dream come true for all of us."

For his part, Berenson doesn't understand the controversy around the family. He found the Hymans to be some of the easiest people he has worked with in more than 30 years of coaching.

And he misses having Zach's passion and intelligence around his team.

"I never got one phone call from Stu Hyman about anything," Berenson said. "And Zach went through more adversity in his first two years at Michigan than he probably did his whole life. 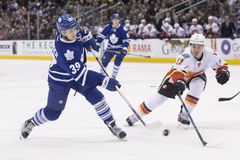 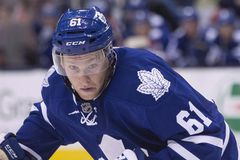 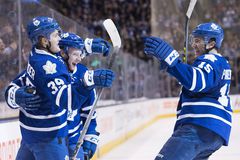