Leafs Nation was beside itself for most of the day after word spread that Auston Matthews, Toronto's marquee player, was perhaps not feeling in tip-top shape and might have to miss Monday night's game against the upstart Vegas Golden Knights.

Even with Matthews in the lineup the Leafs have been playing poorly of late. This was distressing news indeed.

You could almost detect a huge sigh of relief from the fans when the Leaf centre stepped onto the ice for the pregame skate at the Air Canada Centre, a sure sign he was to be gainfully employed centring Toronto's top line.

Matthews played and was his normal pesky self, a dangerous dash down the right wing in the first period setting up a goal by James van Riemsdyk, to help put the Leafs back in good standing with an entertaining 4-3 shootout win.

After a zany five-minute overtime in which neither team could score, the game went into a shootout where Mitch Marner made a great deke that pulled Golden Knights goaltender Maxime Lagacé out of position and he fired the puck into the gaping net.

"You've got to have good hands to do that but obviously you have to have some ice through your veins to pull that off," said an appreciative Toronto goaltender, Frederik Andersen.

It was an uplifting win for the Leafs, who were outplayed for large portions of the contest.

Toronto took a 3-2 lead into the third where the Golden Knights would tie it on Engelland's goal, snapping one from the top of the right circle that beat Frederik Andersen to the far side, a shot the Toronto goaltender would definitely like back.

"I wasn't too happy about the third goal," said Anderson, who responded by shutting down the Golden Knights after that, especially in the shootout where he stonewalled Smith, Neal and finally David Perron that clinched Toronto the victory.

"That was a good win for him tonight," Babcock said. "Ideally that shootout is even better for him because he did it and now you get to feel good about yourself, you get to go home and you get to actually sleep good and get up tomorrow and have some zip in practice and stuff like that.

"That's important for us. I think we have a chance to be a better team here on Wednesday."

The game begins a busy week for the Leafs, who will play four games in total, including the next two at home – Wednesday against Minnesota and Friday against Boston, the first of a back-to-back home-and-home set against the Bruins.

The prospect that Matthews might not play first surfaced in the morning skate when he was only on the ice for a few minutes before lurking off to the locker room.

"A little soreness, we'll see," Toronto coach Mike Babcock said when asked about the condition of the team's star.

It was all enough to cause a major upheaval among the blue and white faithful.

Missing games is not something Matthews has been used to, having played in all 82 regular-season games last season during his spectacular rookie campaign.

The Leafs returned to Toronto for Monday's game following an uninspiring 1-3 road trip. After winning seven of their first nine games the Leafs then proceeded to lose five of their next six heading into the Vegas tilt.

Babcock said his team has not yet learned to win those games when there's little juice left in the tank.

"We haven't figured that part out yet," he said. "When we were 7-1 we weren't as good as everybody was saying. When you're 1-6 you're not as bad as everyone's saying. I don't even know what they're saying, to be honest with you, I don't listen.

"But that's what I feel. We'll just keep on keeping on."

With a 5-4 win Saturday over Ottawa, Vegas improved to 9-4-0, becoming just the second team in the 100-year history of the NHL to reach nine wins in 13 or fewer games during its inaugural season.

Babcock credited the club's shrewd construction, led by George McPhee, the president of hockey operations and general manager, for the Golden Knights strong showing so far.

"They're set up to be better in the future, obviously, but they've got good depth in their roster. There's doesn't seem to be a whole lot of fall off and I think they've played well."

If Matthews is ailing, it did not show in the first period where the centre figured large in providing the Leafs with a 2-1 lead.

With the score knotted at 1-1 after Kadri (on the power play) and Neal scored 38 seconds apart, the Toronto centre powered down the right side and spun in front where the puck landed on the stick of van Riemsdyk.

The winger jammed it home to give Toronto the lead.

Kadri then added his second of the period at the 15:03 mark to provide Toronto with a 3-1 advantage.

The Golden Knights carried most of the play to Toronto in the second period and it paid off when Smith, after the puck careened back in front after deflecting off the backboards, one-timed it into the gaping Leafs net.

The goal, a power play marker with 70 seconds left, cut Toronto's lead to 3-2.

Leafs’ Matthews a game-time decision due to ‘general soreness’
November 6, 2017 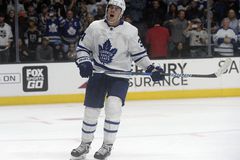 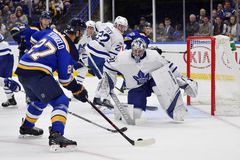 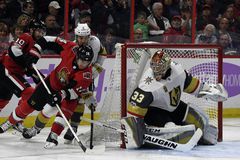