The year was 2006, the setting was Montreal's cavernous Palais des congrès.

An owlish figure with oversized horn-rimmed glasses and a crown of snowy hair ambled in, notepad in hand, and was ushered past a group of milling reporters and into a side room for an exclusive sit-down with recently elected prime minister Stephen Harper.

The writer wasn't there to discuss matters of state; he was Red Fisher, his business was hockey.

Afterward, a former colleague (the author of these lines) asked how it had gone.

Mr. Fisher grumbled, "Ask him. He's the one who wanted to interview me."

There have been other titanic figures in Canadian sports media history, but few, if any, have loomed as large for as long as Mr. Fisher, who died on Jan. 19 at the age of 91.

"To me, Red was simply the best. Game after game, year after year, he wrote with intelligence and respect – for a game and its traditions, for those who played it and coached it, for those, his readers, who loved it deeply," former Montreal Canadiens goaltender Ken Dryden wrote in an e-mail to The Globe and Mail. "Red had standards. He knew what was possible, and therefore what should be expected, from each team and each player, and from the sport itself; and, unfailingly, he held all of us to those standards."

Mr. Fisher did so for a remarkable 57 years, which he split between The Montreal Star and The Montreal Gazette.

He joined the Canadiens beat in the days of train trips and fedoras, when television was in its infancy, and he retired in a world of nine-digit contract extensions, live streaming and social media. Over that time, he became synonymous with the sport in Montreal and beyond.

"Why was Red so important? Well, it's because the Montreal Canadiens were so important," said Michael Farber, a long-time friend and former Gazette colleague. "In those days, Canada was red or it was blue, the Canadiens had the best teams – although the Maple Leafs also had some great ones – and they had the most important players. He was the voice of Canada's team."

Dick Irvin, a Hall of Fame broadcaster, barnstormed with Mr. Fisher for the best part of three decades. He handled the play-by-play while Mr. Fisher did colour commentary and then dug out his typewriter. Mr. Irvin said of his former radio partner that "we all loved the game, but Red loved hockey and the life of the hockey writer more than anyone. He was always the first to the airport even though he didn't drive. … He was always last out of the press box."

By the time of his audience with the 22nd prime minister, Mr. Fisher had been in the newspaper game more than long enough to spot a decent angle, so he pounded out a crisp 1,100 words on the encounter.

"As for the reason [Mr. Harper] was gracious enough to invite me to sit with him yesterday, it was because I had presented him with the first book on hockey ever written," he wrote. "It's comprised of 122 pages with the dimensions of a cellphone … and only three copies are known to exist." History mattered to Mr. Fisher, perhaps because he was so often part of it.

The first-ever Canadiens game he was sent to cover was on March 17, 1955. That's the night the Richard Riot broke out – a seminal event in Quebec's modern social and political history.

As the melee unfolded, Mr. Fisher repaired to a payphone and called the paper, whereupon an editor suggested he "mingle" with the rioters and write about it. "Red said, 'If mingling's what you want, you should come down here and do it yourself,' and he ran back inside the Forum to work," Mr. Irvin said.

In the next afternoon's Montreal Star, Mr. Fisher's byline featured atop an article about the violence surrounding the suspension of Habs star and folk hero Maurice (Rocket) Richard, and on another, shorter piece that described Jack Adams, then the general manager of the opposing Detroit Red Wings, as "a florid-faced … sweaty hockey executive." Mr. Fisher's first story on the National Hockey League was a stiff jab at a revered member of the establishment; a tone was set.

In Mr. Dryden's words, he would provide the "persistent, relentless, insightful and fair voice" that successful teams need to hear. (It should be said here that Mr. Fisher covered 17 of the Canadiens' 24 Stanley Cups.)

"He was the good critic who helped make good critics of the millions of Canadiens fans. He made the team, and all of us, better," the Hall of Fame goaltender said.

Words such as "irascible" and "cantankerous" are often associated with Mr. Fisher and it is true he didn't suffer fools; as with many others who have ascended to professional pinnacles and stayed there, he wasn't without ego. Mr. Fisher could be as withering and dismissive of strangers and colleagues as he was generous, attentive and empathetic to his innumerable friends.

Also, he was funny and often hilariously profane.

Mr. Farber recalled an occasion when the Canadiens suffered a ritual humiliation in Edmonton at the hands of the Oilers and Mr. Fisher was asked for a candid assessment of Montreal goaltender Rick Wamsley by a local writer. The observation – "he was horse-(bleep)" – showed up in the next day's Journal.

When Mr. Wamsley remonstrated after practice, Mr. Fisher retorted that he'd been misquoted.

"I said you were horse-shit," he clarified.

Mr. Fisher was a dedicated, inquisitive reporter and so there were momentous, era-defining scoops, such as the time he got hold of an internal report on league finances in 1970; the resulting series of stories would change player compensation forever and earn him the first of three National Newspaper Awards.

Then there was the day in 1984 when Mr. Fisher caught wind of the impending retirement of Canadiens icon Guy Lafleur – his timing on that one was especially propitious. The Gazette editor of the day had been making noises about replacing his lead hockey writer, whom he believed had "lost his fastball."

A few months after breaking the Lafleur story, Mr. Fisher was elected to the Hockey Hall of Fame, an organization with which he would later have a messy, permanent and not entirely unjustified falling out – he was known to harbour the odd grudge.

Oh, and Mr. Fisher remained on the beat for 28 more years.

"Red loved to give the impression he knew something we didn't," Mr. Irvin said. "And more often than not, he did."

Over time, Mr. Fisher developed a set of unwritten yet inviolable Red Rules. A sampling: he didn't talk to rookies, didn't traffic in rumours, never used the word "Habs" in print. He also had a distinctive storytelling and writing style that occasionally invited parody ("Then again," Mr. Farber noted drily, "so did Hemingway.")

A self-admitted "country music freak" and boxing devotee – this was a man who contained multitudes – Mr. Fisher approached the off-season in the way modern hockey players do. He would walk all over the city to get in shape; during the season, he could be spotted in hotel gyms riding a stationary bike, headphones clamped on, C&W blasting. "White sneakers, black socks, which always killed me," Mr. Farber said.

He knew everyone and everyone knew him; once in New York, Rangers executive Glen Sather – one of Red's "great and good friends" – wandered by and casually handed Mr. Fisher a board of governors document that another reporter at the table had been chasing for weeks. He'd barely had to ask for it.

Before home games, which he attended assiduously into his mid-80s, always in a jacket, tie and hat, he could reliably be found holding court at the same corner table in the Bell Centre's Jacques Beauchamp Lounge (he also favoured corner hotel rooms and burnt toast.)

On Jan. 20, the day following Mr. Fisher's death, prior to a game between the Canadiens and their old enemy the Boston Bruins, a motley assortment of hacks and NHL grandees, including club owner Geoff Molson, gathered to raise a glass of Chivas Regal in homage.

It was Mr. Fisher's tipple of choice and although NHL press boxes have been dry for decades, he had acquired rights.

His work area was directly above the centre red line, the best seat in the house and the same one he had in the old Forum. Through the years, a steady parade of hockey lifers, out-of-towners and hopeful youngsters stopped by to trade information or seek his favour.

For the game against the Bruins, his place was empty save for a half-empty bottle of Chivas, a pocket-sized Gazette notepad, some early newspaper clippings and a vintage computer.

Mr. Fisher was an unrepentant Luddite when it came to the tools of the writing trade. Long-time colleague and friend Dave Stubbs remembered a 1999 evening in Toronto, when Mr. Fisher's beloved and severely battered Tandy word processor went on the fritz.

When he called The Gazette's technical department, they advised him to raise the machine above his head and give it a good shake; with a raised eyebrow, Mr. Fisher complied.

"Then he put it down, hit the power button and wouldn't you know it, the thing turned on," Mr. Stubbs recalled. "For years after that, he would look at me and pick up whatever computer he had at the time, hold it over his head, shake it, then fire it up and say, 'It still works!'"

The son of Russian émigrés, Saul Fisher was born on Aug. 22, 1926, and grew up just off The Main, Montreal's Boulevard St-Laurent, where his father sold second-hand shoes.

His last and possibly proudest honour came this past December, when he was named a member of the Order of Canada.

Mr. Fisher died just 10 days after the death of Tillie (née Singer), his wife and constant companion of 70 years. He leaves his daughter, Cheryl; son, Ian; and grandson, Ryan. 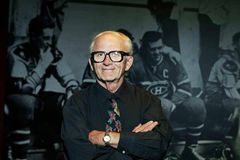