The numbers are astonishing: as of Saturday night, there were 106 players – more than one-seventh of the NHL's work force – listed as injured. The injuries ranged from minor aches that kept a player out of that night's game to the career-threatening ones that have seen some players on the long-term injury list going back more than two years.

In terms of this season's salary, those 106 players represented $268.23-million (all currency U.S.). That is a number the NHL owners and general managers should understand but there has been no outcry for a serious study or measures to prevent injuries.

Granted, in the last few years the NHL has taken steps to better treat concussions and tweaked its rules and how they are called in an effort to reduce head injuries. But the problem goes beyond concussions alone, although they remain a major issue.

Injuries will always be part of hockey. The game is fast and physical, so they are a fact of life. But an old problem – the lack of respect for opponents and a lack of plain old common sense – is making things worse since the league made several rule changes eight years ago to speed up the game and make it more exciting for fans.

Now, simple or accidental collisions occur at high speed and result in serious injuries or close calls. Typical of a recent string of such hits was one in which New York Rangers centre Brad Richards was fortunate to escape a serious injury when a push from Buffalo Sabres centre Patrick Kaleta sent him face-first into the boards. Ditto for Rangers defenceman Ryan McDonagh when he was tumbled into the boards from behind by Montreal Canadiens forward Max Pacioretty, who should know a thing or two about dangerous hits after being driven into a post by Zdeno Chara a few years ago.

The hit by Toronto Maple Leafs winger James van Riemsdyk that put Pittsburgh Penguins centre Evgeni Malkin out of the game late in the third period Saturday is not part of this discussion, however. It was a good, hard, but clean body check.

"What it is, is recklessness," said Toronto Maple Leafs head coach Randy Carlyle. "In reality, I haven't seen anybody really drill somebody from behind. It's kind of more, oops, and catch a player off-balance or they use their hip."

Other coaches say the root problem is speed, although Ottawa Senators head coach Paul MacLean agrees with Carlyle that the players need to think more.

"I think it's totally speed," MacLean said. "It's like trying to stop a car. Some cars have better brakes than others. Hockey players have slow brakes."

But there are situations, such as Kaleta's hit on Richards, where the player had time to think about pulling up but didn't. The question is, who is responsible for teaching the players to try and think?

Carlyle talks about it being a matter of common sense but doesn't have any suggestions. The NHL's general managers are going to talk about the speed of the game and its problems at their annual meeting in 10 days but most of that time will be taken up grumbling at the league's executives the game is now too fast for the on-ice officials to call properly.

There is a health and safety committee of players and management that came out of the new collective agreement but it has yet to get its feet wet. The answer lies with the NHL competition committee, which has real teeth and is a cross-section of owners, players and GMs.

The competition committee's mandate includes making the game safer for players. It is time this committee steps up and seriously considers things like mandatory visors, an issue that comes up like clockwork every season when someone like Rangers defenceman Mark Staal is lucky to escape losing an eye, tougher sanctions on careless hits and, most of all, an education program about thinking as much as you can in that split second before someone goes tumbling face-first into the boards.\ 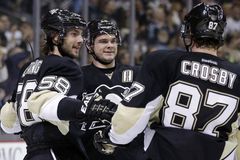 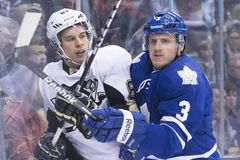 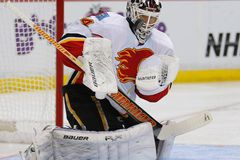