Rob Blake is the San Jose Sharks captain and at age 40, has been around the NHL block a time or two. He won a Stanley Cup with the 2001 Colorado Avalanche and then, as now, the primary obstacle standing in the way was/is the Detroit Red Wings, a team with a fabulous playoff history and pedigree that is not going away meekly, just because they happen to be down 2-0 in their best-of-seven Western Conference semi-final.

The Sharks squeezed out a pair of 4-3 wins on home ice, thanks in equal parts to timely scoring on the power play; the unexpected emergence of (Little) Joe Pavelski as a playoff scoring hero; and the ability of (Jumbo) Joe Thornton to contribute the game winner Sunday at a critical point in the third period.

Accordingly, Tuesday's third game is shaping up as the Battle Of the Sharks' Joes (Big and Little) at the Joe - Detroit's venerable Joe Louis Arena - and may the best Joe(s) win.

Thus far in the playoffs, Pavelski has been something of a revelation for the Sharks, who are on a five-game postseason win streak. In the opening round, Pavelski scored the last-minute tying goal in Game 2 against the Colorado Avalanche, the overtime winner in Game 4 and the series clincher in Game 6.

It has been more of the same against Detroit, where Pavelski has scored twice in each of the first two games, giving him nine goals and the overall playoff goal-scoring lead - not bad for a player who had had only 25 goals in 67 regular-season games, good for sixth place on the team's overall scoring list.

That Pavelski is leading the charge for San Jose comes as no surprise to Blake, however, who has played with him for two years and against him before that during his Los Angeles Kings' days.

"I think we've understood the last couple of years, what he can do and the total package that he can bring," said Blake Monday morning, via his cell phone, prior to boarding the Sharks' charter flight to Detroit. "He plays in all situations - penalty kill, power play. He takes big draws for us. And now, his scoring obviously has been so key for us here at big times in the game."

Pavelski has always been good around the net, at whatever level he's played, but nothing quite like this has happened to him in the NHL.

"You're right, sometimes it just goes in for you - and you really can't say why it happens, on certain goals, or certain opportunities," Pavelski said. "The biggest thing is just getting the opportunities and hopefully, they do keep going in.

"But I would say it's also the other guys doing their jobs and going to the net and getting that front presence - and goalies not being able to see the puck as well as they can or want to."

On Sunday, Pavelski's success spilled over to Thornton, the team's regular-season scoring leader, who picked an excellent time to score his first of the playoffs - with the game tied 3-3 and teetering in the balance.

Sharks' coach Todd McLellan did a smart thing there. He reassembled his slumping No. 1 line, which had been apart since midway through the last series for a variety of reasons - Dany Heatley's "lower-body" injury; Patrick Marleau's flu-related absence, and a general overall lack of production. Knowing he needed one more big goal, McLellan decided to give that line multiple chances to win the game. It worked.

With a win Tuesday, the Sharks can take a stranglehold on the series. The past six times they've been down 2-0, the Red Wings have only come back to win once. On the other hand, the last time the Sharks were in this situation - up 2-0 in the conference semi-finals - was in 2006 against the Edmonton Oilers. The memorable third game went to multiple overtimes, but the Sharks eventually lost the game and the series.

So Blake understands that while things are looking good, nothing has been won yet.

"Our attitude is we haven't done anything yet," Blake said. "We got the games we needed at home here. We got fortunate in the third period [Sunday night]with some power plays. And our power play's been real good and we capitalized.

"But that franchise has a history and there's a reason they've been that good. We know we're going to get Detroit's best game." 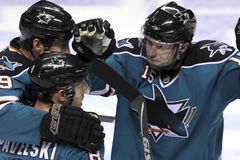