It was a tumultuous, uncertain time that every Canadian hockey fan remembers well.

In the early 1990s, the dollar sunk sharply, taking with it the finances of many of the NHL teams based in this country. With American teams dealing with a currency worth 30 to 40 cents more for nearly a decade, they had an advantage.

Some teams such as Quebec and Winnipeg relocated south. Others simply struggled. Those remaining also petitioned the government to step in, including one famous series of impassioned speeches at the House of Commons in the spring of 1998. In his speech, then-Montreal Canadiens president Ronald Corey noted that "it costs us $300,000 more every time the dollar loses one cent."

Today, almost 17 years later, with player salaries more than double what they were, those drops are even more costly. And there are concerns teams could wind up in uneasy territory again.

On Wednesday, the Canadian dollar plummeted dramatically, initially falling 2.2 cents against the U.S. dollar in less than four hours after the announcement that the Bank of Canada was cutting interest rates. The dollar closed at 80.50 cents on Friday afternoon – a more than five-cent drop in the past month and down 13 cents since late June when the NHL's current $69-million (U.S.) cap was established. 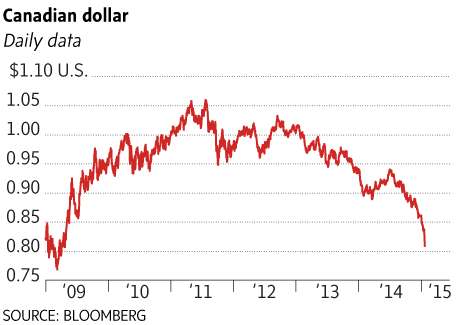 Because of energy prices and other factors related to the economy, that free fall may not be over. No one's quite sure. What they do know is the dollar's decline has already outpaced economists' downward projections for the year in the first 23 days of 2015.

That uncertainty? It's back.

A low Canadian dollar hurts the NHL in a multitude of ways, and both the league and the seven Canadian teams keep an eye on its fluctuations daily. They engage in what's known as currency hedging to protect themselves from drops, but dramatic falls such as those of late are difficult to protect against. Because player salaries are paid in U.S. dollars, every currency drop hurts those teams' bottom line. For a wealthy franchise such as Montreal or Toronto, that simply means a lower profit margin. For a team closer to the break-even point, such as Ottawa or Winnipeg, an 80-cent dollar may well push them $5-million into the red and affect personnel decisions in the future.

Spending to the cap may no longer be possible.

The dollar's shift is only one factor, but there's evidence its movement translates to success on the ice. Between 1994 and 2000, the dollar sat around 70 cents and Canadian teams had an average of only 75 points a season – nearly 10 below U.S.-based ones. Meanwhile, Canadian teams' most successful season, points-wise, came in 2005-06, when the dollar began to shoot back up to close to 90 cents.

But the impact goes beyond only the Canadian teams. Another big casualty of a lower dollar is the salary cap, which is tied directly to the league's annual revenues. Because Canadian franchises pull in a disproportionate amount of hockey-related revenue – estimated between 30 and 35 per cent – the dollar shifting can have a big impact on the total.

In mid-December, NHL commissioner Gary Bettman told the board of governors that the league projected a $4-million rise to a $73-million cap based on the dollar averaging 88 cents for the year, something that is now completely unlikely.

The NHL uses the average exchange rate from throughout the season (October to June) to calculate its revenues, meaning Canadian funds collected last summer as part of season-ticket packages will be treated the same way as what's brought in during the playoffs. If that season-end average is 84 cents instead of 88, that alone could mean a loss of up to $60-million in revenue.

Bettman's $73-million cap was based on revenue of approximately $3.85-billion; if it's $60-million lower, the cap projection will fall by somewhere in the neighbourhood of $1.2-million. If the dollar falls further, there would be more pain than that.

"Still projecting a decent cap increase," was deputy commissioner Bill Daly's only comment on the subject this week.

The biggest doomsday scenario for the cap would be if players themselves decide they don't want it to rise. Every June, the NHL Players' Association has to greenlight a 5-per-cent cap inflator that helps drive the league's ceiling higher in anticipation of revenue growth.

With players currently paying 14 per cent of their salaries into escrow, – a figure that could increase the rest of the season as the dollar falls – they may not want the cap to rise.

A low or no-growth cap would create massive pain for successful-but-capped out franchises such as the Chicago Blackhawks, who have been signing players under the assumption the NHL's ceiling will continue to rise. Already, some teams around the league are considering a "vulture" strategy, where they'll purposely head into the summer with a lot of cap room in order to take advantage of distressed teams.

The New York Islanders pulled this off last fall in landing two of their top defencemen – Johnny Boychuk and Nick Leddy – from Boston and Chicago and now have one of the best records in the league.

In that sense, a low cap can hurt big market teams and benefit those resting closer to the salary floor.

"If it's ever not going to be voted in, it'd be this summer," one source on the NHLPA side said of the inflator.

That may be a long shot, but the fact that such extreme scenarios are even on the table shows how vital a stable currency is to the NHL. The league has enjoyed continual and considerable revenue growth for years now and had hoped to top a record $4-billion in revenues during the 2014-15 season.

That may now take another year or more.

"The league is obviously healthier when the dollars are closer to par," Daly told The New York Times recently. "But I think the business success of the league and the clubs over the last several years stands on its own."