No one had even asked the question.

No need to. Ottawa Senators head coach Dave Cameron walked up to the microphone and stated the obvious:

"Yes, I am concerned about our record at home."

And so he should be, as Wednesday marked the final game of a four-game homestand for the Senators and, so far this young season, they had yet to raise their sticks in victory at Canadian Tire Centre.

Not even Halloween and some of the fans calling in to the talk shows were already calling for fresh bodies, both back of the bench and on.

Opportunity, however, presented itself on a day when the vestiges of Hurricane Patricia swept through the national capital. The Calgary Flames, a team that had lost seven of its first nine games, was in town to face the Senators.

A one-anthem game with one certain outcome: Given that the NHL put an end to ties with overtime and the shootout, there would have to be a winner.

No one could possibly have foreseen how wild it would be.

Ottawa won 5-4 in a shootout, thereby claiming, finally, the team's first victory at home this season.

Emotions are irrational in sport, but in the modern NHL there is, curiously, some argument to be made for early panic.

There is today so much parity in the game – whether caused by salary cap or stifling coaching, take your pick – that failure to move with the pack can quickly prove disastrous. As Globe and Mail colleague James Mirtle pointed out recently, seven teams failed to get to 10 points by Halloween of last year and only one of them, Winnipeg Jets, made the playoffs.

In the case of the Ottawa Senators, their surprising step into last spring's playoffs came courtesy of a freak situation that is unlikely ever again to occur. Starting goaltender Craig Anderson was injured and replaced with backup Robin Lehner, who then suffered a concussion in a collision with teammate Clarke MacArthur.

This forced the Senators to turn to an untested minor-leaguer, Andrew Hammond, who made his NHL debut at the rather ripe age of 27. The "Hamburglar" then went 20-1-2 down the stretch as the Senators moved from despair to meeting the Montreal Canadiens in the opening round of the Stanley Cup playoffs.

The fallout of all that was that Lehner, the supposed heir to the net, was traded to Buffalo and Hammond given a three-year, $4.05-million contract.

Calgary also surprised last spring when the Flames scrabbled their way to 97 points and a playoff position. They surprised the Vancouver Canucks in the first round but fell to the powerful Anaheim Ducks in the second round. It was a valiant performance and expectations for 2015-16 could hardly have been higher when the season began.

When a team has but four points after nine games … well, reaching that 95-100-point level required to reach the playoffs becomes increasingly unlikely, though not impossible if change only comes quickly and lasts.

The solution is obvious, says Flames head coach Bob Hartley. "You need goaltending. You need goals. You need production from everybody."

For a long period this night no one seemed capable of moving beyond the storm, not in the parking lot, not on the ice. The Flames were barely smouldering in the opening period, but so superior to the listless, error-prone Senators it seemed unfair that they had no lead.

The two players who are expected to be the stars – Ottawa forward Bobby Ryan, with his new seven-year, $50.75-million contract, and Calgary defenceman Dougie Hamilton, traded from the Bruins for a costly first-round draft pick and two second-round picks – have struggled mightily so far. Ryan had but a single goal. And that into an empty net; Hamilton came into the game a disappointing minus-11.

But all that soon meant nothing as a dreary game suddenly became a real game, even a wild game.

It was the much-criticized Hamilton who scored first, moving up ice early in the first period and firing a hard wrist shot to the glove side of Anderson.

Ottawa finally scored late in the second when Zack Smith lost the puck in his own end, regained it and skated untouched down the ice to score on a similar play against Calgary goaltender Jonas Hiller.

Then, with 13.5 seconds left in the period, Bobby Ryan finally scored a real goal, shovelling a Kyle Turris pass in past Hiller from the side of the net.

The Flames then opened the third period with Joe Colborne scoring on a broken play and then going ahead 3-2 on a weak goal by Kris Russell that Anderson misjudged.

It seemed that, indeed, Ottawa would set a team record they wanted no part of – five straight losses at home to open the season.

But then, as it they finally awoke, Kyle Turris scored on a scramble and little Jean-Gabriel Pageau put the Senators in front with a shot that somehow leaked through a crowd. It could not hold, though, as Sam Bennett tied the game again on a Calgary power play.

In the end it was settled, rather appropriately, in a shootout.

As Cameron had said earlier in the day, "It's not rocket science." 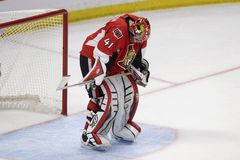 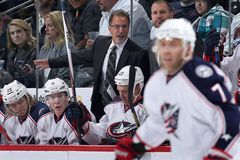 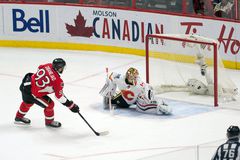