What a country … Step aside Brazil, move over Commonwealth, get lost U.S. government shutdown. Forget the Senate, the pipeline, the various scandals across this vast land, even the weather – Canadians have to stop everything right this very minute to talk hockey.

The new Team Canada jersey is an abomination; Sidney Crosby will be turned into a Petro-Canada billboard.

The new Team Canada jersey is "faster" – this said, incredibly, with a straight face by both the manufacturer, Nike Inc., and by a former Olympic gold medalist, Joe Nieuwendyk, who must have worn a much "slower" model in 2002, when Canada won in Salt Lake City.

In this country, you call a news conference to introduce a hockey uniform, and broadcast outlets carry it live – including streaming the announcement on the Internet for those unable to get to a television immediately.

No surprise, really, to those of us who remember when they called a news conference, again carried live to an anxious nation, to announce who the third goaltender would be in Salt Lake – a player (Ed Belfour) who would not play a single game in the tournament.

It's undeniable this country is slightly off its rocker blades when it comes to the national game. The Prime Minister is about to publish a book on hockey. The Americans put God on their currency; we put a shinny game. If Don Cherry speaks, we treat it like news.

All day long, following a somewhat clumsy news conference held in the building that used to hold Maple Leaf Gardens, Canadians debated the new Olympic uniform as if it were a burning campaign issue.

They called it a "jersey," whereas for a century it had been known as a "sweater," but then "locker rooms" used to be "dressing rooms" and the first name of the serious-looking guy behind the bench used to be Toe or Punch, not "coach."

The manufacturer talked about the "psychological" powers of such a jersey, reminding fans on the West Coast of an ill-fated experience when "colour psychologists" were consulted in a redesign of the Vancouver Canucks uniform, resulting in a black-orange-red abomination that was supposed to scream aggression.

Black surprisingly showed up in the new Team Canada jerseys as well, but only in the so-called "third jersey" that, despite CBC calling it "necessary" for the 2014 Sochi Winter Games, is necessary only to bump up sales. No other national team will have a third jersey – likely only because they didn't think of the marketing potential.

What differentiates this uniform from that worn by previous editions of Team Canada is the absence of the stylized logo featuring the outline of a hockey player inside a maple leaf. Hockey Canada was forced by the International Olympic Committee to tone down any such non-Olympic symbol for the 2010 Vancouver Games, and in Sochi it will have vanished entirely.

It is not the first time the IOC has told Canadian hockey players how to dress. According to Andrew Podnieks's Canada's Olympic Hockey Teams, goaltender Ralph Hansch was informed at the 1952 Oslo Games that he could not wear a zero on the back of his, yes, sweater. Hansch told them to take a hike – but the IOC instituted a rule requiring all future goalies to use a number that could be counted on fingers.

Hansch merely wanted his sweater – the "0" he had worn all through minor hockey and with the Edmonton Mercurys, the senior team Canada sent to Oslo to win the gold medal.

Soon enough this jersey debate will fade and Canada will move into the next phase of national nitpicking over its Olympic hockey teams – which players get selected, which players don't make it.

Then, come February, the only thing that will matter is what's inside whatever jersey the chosen players happen to be wearing.

Finally, on the last day of both the women's and men's tournaments, all that will matter is whether the Canadians are still playing.

And if by chance there is no medal – horror of horrors – someone will surely say it all began to go wrong that day back in early October when they trotted out the new jersey.

Hockey players will sport new jerseys at the upcoming Winter Olympics and Paralympics in Sochi with a little help from Nike's design team. Hockey Canada and Nike officially unveiled what they called the "most innovative jerseys to date" at Mattamy Athletic Centre in downtown Toronto on Tuesday.

Not only are the jerseys more aerodynamic and 15 per cent lighter than they have been in the past, but they are eco-friendly, too. (Each is made from about 17 recycled plastic bottles).

But sport science and technology aside, how do Canada's new hockey sweaters rate in terms of fashion and overall design?

Waving flag: I like the maple leaf graphic on the red and white jerseys. The way it's done is really simple and graphic. It has been cleverly continued onto the arm, where the number will be.

Backing the black: The black jersey is really well branded. It's concise and clear. It's a great logo.

Fitting in: I like that they're fitted. In a way, they have to be anyway. But one of the best things about being an athlete is that you work really hard for your body, it's nice to put a little bit of it on display.

The red and white jerseys are a little bland.

So which hockey jersey prevails as the fashion winner?

"I think my favourite is the one that says Canada," Ms. Grulovic said. "I love the black with the gold and the red.

Illustrations by Matt Bambach
Source: Nike and icethetics.info
Compiled by Stuart A. Thompson 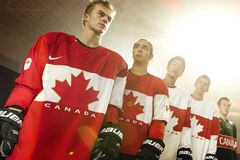 Flare magazine fashion director weighs in on Hockey Canada jerseys
October 8, 2013
Follow Roy MacGregor on Twitter @RoyMacG
Report an error Editorial code of conduct
Due to technical reasons, we have temporarily removed commenting from our articles. We hope to have this fixed soon. Thank you for your patience. If you are looking to give feedback on our new site, please send it along to feedback@globeandmail.com. If you want to write a letter to the editor, please forward to letters@globeandmail.com.
Comments