What a wild, strange trip it was – a lockout-reduced regular season followed by a Stanley Cup adrenalin rush juiced with surprises and disappointments. It went from zero to 100 kilometres per hour at the drop of a puck.

That's how the 2013 Stanley Cup postseason began and that's how it ended Monday when the Chicago Blackhawks scored two goals within 17 seconds in the last minute of the third period to stun the Boston Bruins and claim their second Cup in four years. Maybe it was payback for the Bruins incredulous ousting of the Toronto Maple Leafs in the opening round. Maybe it was simply Chicago being the best team from start to finish, wire to wire to the Cup.

Whatever the explanation, the night and the year belonged to the 'Hawks and that's worth remembering. So are these moments from the 2013 playoffs:

There was plenty of it to recall: the 'Hawks resiliency (may all their bruises and rattled joints heal in time for the start of training camp); Chicago's Patrick Kane coming to life to win the Conn Smythe Trophy; Tuukka Rask's remarkable goaltending for Boston, to name just a few.

But for sheer magic, nothing surpassed Sidney Crosby's goal in Game 2 of the first round versus the New York Islanders. Crosby sliced between defencemen Lubomir Visnovsky and Thomas Hickey, pulled away, put the puck on his forehand and beat goalie Evgeni Nabokov. It instantly brought back memories of the magnificent marker Mario Lemieux made against the Minnesota North Stars in Game 2 of the 1991 Stanley Cup final.

Only difference: Pittsburgh won the Cup in 1991; it got swept by Boston this year.

Okay, let's get this over with: the Leafs incredulous Game 7 collapse was, for many, a sickly kick to the stomach. One minute, the Leafs were in complete control with a three-goal lead in the third period; the next, they were doubled over in overtime agony. Now the Bruins and their fans can relate after their loss in the final. Misery, you have new neighbours.

Also bad, with a twist, were John Tortorella's grim-faced news conferences as coach of the New York Rangers. He looked like a man having a colonoscopy performed by Jack the Ripper. He said little of importance and, when he did, he sometimes maligned his players. Of Carl Hagelin, Tortorella stated: "He stinks on the power play."

No wonder Tortorella was fired in New York. He stunk, too. On Tuesday, he'll be introduced as the new coach of the Vancouver Canucks. Heaven help the Sedins.

Take your pick: was it San Jose Shark Raffi Torres's hit on Jarret Stoll of the Los Angeles Kings, a blind-side knock down that suspended Torres for the balance of the playoffs' second round? Was it Chicago's Duncan Keith high-sticking the Kings' Jeff Carter in the face for a one-game suspension?

Based on the volume of shamefulness, let's go with the fallout from Ottawa Senator Eric Gryba's hit on Montreal Canadiens' Lars Eller. Gryba rammed into Eller, who was left unconscious on the ice in a pool of his own blood. In the follow-up game, the two teams engaged in a line brawl that contributed to eight game misconducts and 230 penalty minutes.

There were players who turned in valiant efforts – Chicago forwards Bryan Bickell and Andrew Shaw and Boston's undrafted defenceman Torey Krug. Yet, what Josh Harding and Gregory Campbell did went above and beyond.

Harding, the Minnesota Wild's back-up goalie, was rushed in when starter Niklas Backstrom hurt himself in the warm-up before Game 1 against Chicago. Harding had been diagnosed with multiple sclerosis last September and had issues with his medication. He played in only five regular season games before taking on the top-ranked 'Hawks. Although the Wild lost in five games, Harding won a lot of fans with his determination.

As for Campbell, what can you say about a guy who breaks a leg blocking a shot and manages to stay on the ice for 45 seconds killing a penalty? His brave-heart defiance spawned a Twitter trend, #ImGregoryCampbell, which led to a flood of funny lines and an outpouring of admiration.

And the nominees are:

Rask, the Boston goalie who when asked about the "electricity" inside TD Garden, replied, "The lights were fine."

Boston forward Milan Lucic, who described the Penguins as "the Miami Heat of hockey." That was before the Heat won another NBA title.

L.A. coach Darryl Sutter, who when informed his Kings hadn't won a Game 7 since 2002, snapped back, "Who cares?"

And the winner is: Darryl Sutter, who was suffering from a double hernia when he said, "Who cares?" He later had surgery done by the da Vinci robotic surgical system. The robot apparently has better hands than Slava Voynov, and that's saying something.

This business of the winning team carrying the Stanley Cup on a skate around the arena, it had to begin somewhere with someone. But who exactly, and when?

He calls back from suburban Michigan and happily says, "If I started that tradition, I'm honoured."

Ted Lindsay, Terrible Ted, they called him, has been hailed far and wide for helping establish the NHL Players' Association. But the feisty winger did more than that.

On night of April 23, 1950, Lindsay's Detroit Red Wings and the visiting Rangers went into double overtime of Game 7 to decide the Stanley Cup champion. It was the first time in NHL history a Cup Final had gone to overtime in Game 7. And, in the end, Pete Babando scored to give Detroit its fourth Cup.

Here's what happened after the Babando goal, according to Lindsay, still spry at 87:

"At that time, they had a table (on the ice). They took it out of the garbage or from some place in the Detroit Olympia. It was just a little table with four wooden legs and that's what the Stanley Cup was sitting on. There wasn't a drape over (the table). They presented it to Jack Adams (Detroit's general manager). When that was over, the players took it to the room where you'd never see it again unless you won it again.

"There was no parade, no day with the Cup."

But before it was taken to the Red Wings' dressing room, Lindsay knew what he had to do with the Cup.

"I recognized who was paying my salary. It wasn't the owners – [Conn] Smythe in Toronto, [James] Norris in Detroit. It was the people in the seats. I went to the [faceoff] dots in our end because that was where there was open seating. There was no glass around the boards like there is now. At the end of the rink, we had chicken wire.

"I saw all the people sitting there so I picked it up and took it to them. I wanted them to see the Stanley Cup up close. They got to read the names on it."

Did he carry the Cup over his head? Yes, Lindsay did that, too.

Sixty-three years later, Lindsay's spontaneous gesture is a Stanley Cup staple. Once the opposing teams shake hands, and the commissioner is booed for making a speech, the captain of the winning side gets to lift the Cup and pass along to his teammates for a skate. It's been done by many over the decades and it will be done by countless more.

From his Michigan home, Lindsay remembers the moment and what it meant.

"Hockey owes me nothing," he says. "It's been the greatest thing in my life."

Bruins and Blackhawks battered after a ‘very long short year’
May 11, 2018 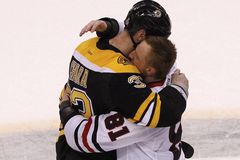 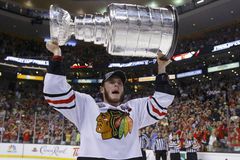 The year Canada’s national winter sport spilled into summer
May 11, 2018 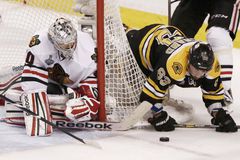 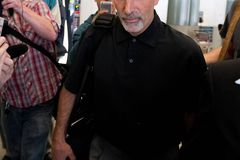