The NHL can breathe normally today; the Chicago Blackhawks are alive and well and referee Stephen Walkom doesn't have to enter a witness protection program.

What happened in Wednesday's Game 7 between Chicago and the Detroit Red Wings could have been spectacularly ugly – a questionable referee's call, a cancelled goal, the top regular-season team getting knocked out of the playoffs and leaving the league vulnerable to a downpour of scorn.

Instead, the NHL lucked out. The 'Hawks shrugged off their non-goal and scored early in overtime. It came off a shot by defenceman Brent Seabrook that hit the skate of a Detroit defenceman and found its way to the back of the net. Call it sublime intervention. The goal was Seabrook's first of the playoffs.

Had Detroit won in overtime, the NHL would have been turning 50 shades of blue. The work of its on-ice officials would have come under scrutiny. The media would have pounced; the players would have piled on. Forget about working another game; Walkom would have been lucky to get out of Chicago unscathed.

He was, after all, culpable on more than one front: he blew the whistle on matching minors scrubbing a play that ended with Chicago scoring. The penalties were on the opposite side of the rink and had no bearing on the action. And while Detroit's Kyle Quincey deserved his roughing infraction for body slamming Chicago's Brandon Saad to the ice, all Saad did was land in a heap. ("Worst call of the playoffs," tweeted Paul Stastny of the Colorado Avalanche.)

At that moment, NHL commissioner Gary Bettman must have broken out in a rash thinking, "There goes our beautiful Conference finals involving the last four Stanley Cup winners. Who can I suspend for this?"

But unlike 1999 when Brett Hull scored the Cup-winning goal with a skate in the crease, good fortune shone down on the NHL like a beam of light from on high. Brent Seabrook is now the commissioner's favourite player. The league has dodged a meteorite.

You just know that kind of luck doesn't hold forever.

Goalie Henrik Lundqvist won a lot of games for New York Rangers' head coach John Tortorella. He helped get him fired, too.

Soon after the Rangers were dispatched from the playoffs by the Boston Bruins, Lundqvist let it be known he didn't like how the team was sliding backwards. "We were in the conference finals last year; we had high expectations on ourselves this year," he said. "It didn't go our way, so yeah it is a step back."

Tortorella disagreed with that assessment. "I think this is a sideways step in our line-up and how things worked out."

Falling from first in the Eastern Conference in 2012 to sixth in 2013. That's a sideways step?

Rangers' general manager Glen Sather has insisted Lundqvist's comments had no bearing on the decision to flush Tortorella out of the organization. But Lundqvist is heading into the final year of his contract. You want your star goalie to be happy enough to sign an extension. You want your team to be inspired. Instead, the Rangers had Brad Richards, stripped of his confidence, sitting in the press box, Carl Hagelin being singled out by the coach for stinking on the power play and Marian Gaborik, traded to the Columbus Blue Jackets, firing off a spicy Tweet on Wednesday that said, "Everything happens for a reason."

Read into that what you may.

Sather did say "every coach comes with a shelf life." What he didn't say was that Tortorella has the shelf life of headcheese. He comes in, works for a while, fills a need and then everything starts to go bad until you have to get rid of him. It's his way.

And so now the Rangers, like the Vancouver Canucks and Dallas Stars, are in the market for a new coach. That means multiple interviews for Alain Vigneault, Glen Gulutzan, Lindy Ruff, maybe even Dallas Eakins. What it means for Tortorella is another wait for another job.

Wonder if he views a return to TSN or TV as a sideways move.

A BRUIN NEVER FORGETS, EITHER

Milan Lucic has been on a roll this week and he hasn't played a game. First, he dubbed the rival Pittsburgh Penguins "the Miami Heat of hockey" setting off a lively debate: compliment or put down?

Then on Wednesday, the Boston power forward told Comcast Sportsnet he still thinks about what happened to his former teammate Marc Savard, whose career was cut short when he was hit in the head by Pittsburgh's Matt Cooke in 2010. The contact left Savard with a concussion and heightened the tension between the two teams.

"It's an interesting question because if it wasn't for that, where would Marc Savard be today? He'd still be under contract with us and would be on our team," Lucic said. "I still talk to (Savard) and keep in touch with him. He was a good friend of mine when he was on the team.

"It's still in the back of your mind, but it's not the focal point when you're getting ready to play in this kind of a series."

Bruins' coach Claude Julien also told Comcast his team's focus has to be "on finding a way to win" against a Pittsburgh side brimming with talent. "If you just want revenge on this guy or that guy … is it really the right focus to have?" he said. "The best way to get that satisfaction is by winning a series."

Cooke was not suspended for the hit on Savard but was suspended twice in 2011 before altering his style of play. Although his skate blade cut the Achilles tendon of Ottawa Senator Erik Karlsson this season, Cooke insisted it was an accident. So far, through 11 playoff games, Cooke has three assists and 18 minutes in penalties and been effective in his role.

Just the same, at least one Bruin hasn't forgotten what Cooke did three years ago, and that's enough to stir the pot.

Here's some free advice for the Los Angeles Kings as they prepare for their third-round series against Chicago.

A few days ago, Detroit defenceman Jonathan Ericsson was asked what the Red Wings had to do to defend 'Hawks' captain Jonathan Toews. Ericsson answered smartly: "We'd like to keep him in the (penalty) box. He's not as good for them in the box." 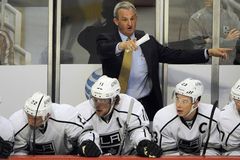 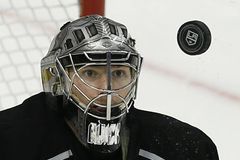