Dan Craig, the NHL ice-making guru, not the James Bond actor, nevertheless has an action-hero nickname, bestowed on him by his crew: minus 007 – a reference to the fact Craig is more like Mr. Freeze, the Batman villain, in that he makes ice where no one thinks it's possible.

And right now, not many know and understand how he can take sun-washed Dodger Stadium and turn it into an ice rink in time for Saturday's much-anticipated outdoor game between the Los Angeles Kings and Anaheim Ducks.

In many ways, Craig speaks a language all his own and, sometimes, it needs deciphering. When he speaks of the "truck," he is referring to the world's largest mobile refrigeration unit, specially redesigned and upgraded to meet the challenges of making ice in the unseasonably warm weather that graced Southern California this week (daytime temperatures in the low- to mid-20s C).

Craig and his specially selected team started putting in the ice last week, working exclusively between dusk and dawn, and had it ready to go by Wednesday, for a test skate by local media and celebrities.

During daylight hours, the ice was covered by an insulated reflective thermal wrap to shield it from the sun's rays.

Almost from the time the NHL announced it was playing outdoors in California, Craig has heard skepticism from people wondering how it could possibly be done, given even winter temperatures don't drop below the freezing point and palm trees are visible from the stadium floor.

"It's a hard concept for anybody who's not in the field to understand," Craig said. "It's because of the efficiency of the truck and the floor.

"We had two separate engineering groups designing each component and they were battling to see which was the most efficient.

"So I have two very efficient systems that we're marrying together."

"You talk to our refrigeration engineers and you tell them the temperatures we want to run at in comparison to Staples Center [in Los Angeles] or the Honda Center [in Anaheim] – and they can't believe we can do what we can do with the components we have," Craig said.

Craig cut his teeth as an ice maker at the former Northlands Coliseum in Edmonton before going to work for the league. The NHL's first major outdoor project was the 2003 Heritage Classic at Commonwealth Stadium between the Oilers and Montreal Canadiens. It was an all-day affair, starting with an alumni game in the afternoon that featured, among others, Wayne Gretzky and Mark Messier, the latter still an active NHL player at the time.

Unlike Dodger Stadium, where the issue is heat, temperatures in Edmonton were too cold to make good ice.

Gretzky, who is acting as an NHL ambassador for Saturday's game, said his primary memory of that first outdoor alumni game was the bitter temperatures.

"I remember the practice the day before was the most exciting part," he said. "We went out and it was 30 or 40 below. I think a lot of the people thought we were going to skate for 10 minutes and get off because it was so cold, but we had a regular practice, skated for almost an hour.

There was no provision to play an NHL alumni game this week, in part because the league wants to preserve the ice for the big game – although the Kings and Ducks are scheduled to practice back-to-back on Friday, just before sunset.

Craig's crew began the process by layering a reinforced plywood floor on top of a raised deck, and then putting down ice pans – 30 feet long and 30 inches wide. The refrigerant passes through the panels made from aluminum which, according to Craig, "is the best heat-transfer material we have on the planet. … It's refrigeration 101. Basically, we remove heat. That's why we work at night, when you have the least amount of heat."

The rest of the process is fairly simple – not a lot different from the outdoor rinks people put in their own backyards.

"We have a spray bar that's eight-feet wide and that's all it is – a spray boom," Craig explained. "We will walk miles and miles and miles – just keep going. The one crew we had [in Ann Arbor, Mich., for the 2014 Winter Classic between the Toronto Maple Leafs and Detroit Red Wings] clocked themselves and they walked 10.3 miles in one shift. That's all they're doing.

Ultimately, the threat of rain is the biggest fear. Beyond an adverse weather forecast, which is beyond his control, Craig says the pursuit of perfection is what keeps him up nights.

"This is an NHL game, two points on the table, and especially with clubs like these that are going to be battling for first overall," he said. "They don't want to lose these two points and I don't want, in any way, to have our conditions dictate how they play the game. … That is my crew's goal – we are perfectionists." 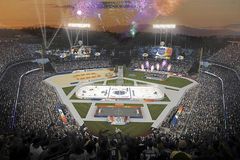 Duhatschek: In the City of Angels, NHL mends fences with The Great One
January 13, 2014 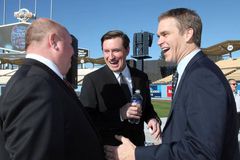