Eight games into the season, Toronto is leaking goals at home and searching for answers.

The door to the Maple Leafs' dressing room was closed longer than usual after Saturday night's 4-1 loss to the Boston Bruins as the players talked it out.

"Frustration, anger. Those are two things front and centre that were probably from the coaching staff's perspective," head coach Randy Carlyle said when asked for his emotions during the game. "We didn't win too many battles early in the hockey game."

Toronto, while 2-0-1 on the road, is 1-4-0 at the Air Canada Centre where the Leafs have been outscored 19-10 while giving up four or more goals four times.

"No explanation. I think we're two different teams on the road and home for some reason," said centre Nazem Kadri.

"We've got to find a way to become a lot more consistent because one good game, one bad game, one OK game here, one OK game there is just not good enough in this league," added captain Dion Phaneuf. "And we are finding that out right now."

After a moving rendition of "O Canada," in conjunction with arenas in Montreal and Ottawa to honour two fallen soldiers, Toronto came out flat and was down 1-0 after three minutes 27 seconds.

Defenceman Dougie Hamilton had a goal and two assists and Patrice Bergeron collected his 500th NHL point on the first of two assists for Boston. Tuukka Rask, meanwhile, continued his mastery over Toronto (3-4-1) as the Bruins, in their first game without injured captain Zdeno Chara, had their way with the Leafs.

"It's the rink that I grew up watching games in and dreaming of being in the NHL so it was an awesome feeling," said Hamilton, a Toronto native.

Richard Panik finally beat Rask with 5:33 remaining, on a delayed power play, slapping in a rebound from in close for his first as a Maple Leaf. Toronto showed some spark after that but it was too late.

Rask, the reigning Vezina Trophy-holder, is now 10-2-0 in 14 outings against Toronto. He came into the game with a .943 save percentage and 1.64 goals-against average against the Leafs.

Toronto goalie Jonathan Bernier exited after giving up two goals on two shots early in the third (he finished with four goals on 25 shots). Carlyle refused to point the finger at his netminder, noting instead the lack of protection around him.

The coach did take a shot at his offensively skilled players, saying that while they are not required to run opposing players over, "I ask them to get in the way."

Both teams finished with 33 shots. Then the Toronto post-mortem began.

"Our coach came in and talked to us, then we talked as a group," defenceman Cody Franson said without elaborating.

While the two teams split four games last season, the Bruins have had Toronto's number in recent years.

The Leafs weren't the only ones feeling the pain Saturday.

Referee Chris Rooney left the game late in the second period, after being hit with the puck just seconds before Krejci's goal. He departed cradling his arm but returned for the start of the third.

The game was preceded by an emotional ceremony to honour Cpl. Nathan Cirillo and Warrant Officer Patrice Vincent, killed in separate incidents this week in Ottawa and Saint-Jean-sur-Richelieu, Que., respectively. The 19,132 fans at the ACC stood and sang "O Canada" with their counterparts in Montreal and Ottawa as the anthem from the Canadian Tire Centre was shown on the scoreboard's big screen.

Cirillo's murder and subsequent attack of Parliament Hill by a lone gunman, prompted the league to cancel the Leafs' game Wednesday in Ottawa. Toronto last played Tuesday, defeating the New York Islanders 5-2 on the road.

Saturday's pre-game emotion did not carry through as the Bruins went ahead early.

Soderberg opened the scoring on the power play after a fanned shot from Hamilton from the face-off circle found Bergeron in front. Bernier stopped his rapid-fire redirect with his pad but the puck went straight to Soderberg who had circled around the back of the net.

"The first goal seems to sink our group," said Carlyle.

"The first sign of adversity at home, it seems to multiply," he added.

It took the Leafs 5:41 to get their first shot in the second period before a crowd sitting on its hands.

Krejci made it 2-0 at 15:58 of the second with a beautiful solo effort for his third of the year. Krejci drove at the Toronto goal, ignoring an attempted check by Phil Kessel, and swatted in his own rebound as he flew over Bernier.

The Leafs paid for a lapse on a power-play opportunity at 2:32 of the third as Campbell beat Phaneuf in front of the goal to a pass from Daniel Paille and beat Bernier with five second remaining on the man-advantage.

Hamilton rubbed salt into the wound, splitting the defence on a rush and beating Bernier with a wrist shot at 4:09. That chased Bernier in favour of James Reimer.

A subsequent pair of Leaf minor penalties did not help the home side's comeback cause.

It was the first game for the Bruins since losing giant defenceman Chara to a knee injury. The six-foot-nine, 255-pounder tore the posterior cruciate ligament in his left knee throwing a hit on Islanders star John Tavares in front of the Boston net. Chara is expected to be out four to six weeks.

It marked just the 21st game Chara has missed of a possible 622 games since joining the Bruins in July 2006.

"You miss a big guy like him, you have to really get together and play as a unit out there," said Rask. "Missing (Chara) we have to play as a unit and we did that today and it paid off big time." 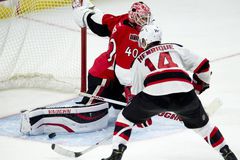 Canadiens remain undefeated at home with win against Rangers
October 25, 2014 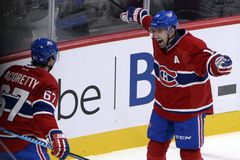