It's 10 a.m., and 28-year-old hockey executive Kyle Dubas is sitting quietly in a leather chair on the eighth floor of an office tower in downtown Toronto.

To his right is Carl Farrell, the executive vice-president of a global corporate giant, one that does more than $3-billion in business annually and is the largest in its field. Typically, Farrell and his firm – which they simply call "Sass" – work with big banks, telecommunications companies or governments, filling what's become a vital niche for many businesses in the field of Big Data.

Of late, however, SAS Analytics' assignment has been a far more high-profile one: They're trying to fix the Toronto Maple Leafs.

The Leafs made headlines in July, when new president Brendan Shanahan plucked Dubas out of his role as the GM of the Sault Ste. Marie Greyhounds, and did so again when Dubas built an entire "hockey research and development" team by hiring a chemical engineer, a mathematician and a sportswriter.

Then the Leafs started throwing some real money around.

When the preseason began last month, there were some changes around the Air Canada Centre. SAS Analytics was on the boards and the Jumbotron, advertising itself as an official partner of the Leafs.

On Wednesday, the partners let the media into SAS headquarters for a demonstration – not of what the Leafs are doing with the technology, but of what they could do with it.

And those possibilities are endless.

"They've made it very easy," Dubas said. "You see some websites that have taken years to build up and get operational. They've put everything together in a number of weeks."

"Everything" in this case is a lot. SAS says it will be applying analytics to support the Leafs in "drafting, contract negotiations, on-ice strategy and style of play" – all areas in which the organization can certainly improve, to varying degrees.

What that means in practical terms is that SAS has been incorporated into a lot of what the Leafs do. The company has a luxury suite at the ACC for every game, and Shanahan and the rest of the management team are provided with live data to tablet computers as games unfold.

Dubas's team, meanwhile, spends time at the SAS office working with their staff and has also begun tracking and submitting its own data, which can then be manipulated by SAS's software to produce data visualizations for everyone from GM Dave Nonis on down.

Wednesday's software demonstration for the media was slick, but everyone was careful to note that the data on screen is not what's actually being used by the Leafs. That part remains top secret.

"We give them the capability to do things like forecasting out a common career trajectory and looking at where a player is on that," said Tim Trussell, an analytics lead for SAS in charge of the slide show, breaking down everything from players' shot selections to salary forecasting. "I'm not saying they are or they aren't."

"We're not really talking so much about what we're doing, per se," Dubas added. "More so showing some insight into how we're collecting it and the value of having a partner like this."

It's early days in the Leafs season, after only four games, but there's evidence of a data-driven approach throughout their lineup.

In addition to shuttling their two enforcers to the minors last week, they have been giving specialized roles to players, including starting centre Nazem Kadri and his linemates, more often in the offensive zone than other units.

The Leafs have also dedicated considerable ice time to rookie defenceman Stuart Percy, who went from not being expected to make the team to logging the second-most minutes on the team after four games.

Both Kadri and Percy have produced great results by most of the common analytics, driving puck possession well in their new roles.

That could all be one big coincidence, but it's a noticeable enough break from coach Randy Carlyle's actions in the past that it speaks to some new logic being applied behind the scenes.

While Dubas won't speak to the specifics, what he does say is that SAS's tools have been "imperative" in getting buy-in from others in the organization.

"It's made it very presentable for me to give to Dave or Brendan or Randy and the staff," Dubas explained. "It's made it all very simple. In the Soo, it was all just numbers. There was no visualization other than you'd print it off and give it to them in a spreadsheet. But it's a lot harder to explain that to people.

"That's been one of the key things already with this. I can go to [assistant coach] Chris Dennis or whoever on the staff, they can ask me questions, and I can pull it up and they can see it very clearly. … If you can use the tool to educate and show different items and points that can help a team competitively, that's an easy way to climb over that barrier."

SAS has seen similar hurdles before. They're partnered with the Orlando Magic in the NBA, among other undisclosed teams, in other undisclosed sports, and have begun to help teams sort through the massive amount of info coming in from SportVu cameras that are beginning to revolutionize analytics in other sports.

That type of data is a couple years away for the NHL, but the Leafs believe that having SAS on board now and at the ready will give them an advantage when the data avalanche comes.

What's impressed the analytics experts early on is MLSE's willingness to buy in, something that can be a problem when it comes to Big Data infiltrating any industry.

"You have to have a level of commitment in an executive team," Farrell said. "In a bank, a telco, in a government department. It's no different than a hockey team. We can produce information but if there's no cultural change to incorporate that into the business process it just sits."

"I would say 100 per cent it has to be a massive change [for the staff]," Dubas said, relaying a story that Leafs senior advisor Cliff Fletcher – who has spent 59 years working in hockey – told him about the controversy years ago over scouts typing up their notes.

"They've all been outstanding with asking questions, trying to learn, trying to find a deeper understanding of what's going on. It's been terrific. A lot of the questions I've never even thought about. They've got so much experience in hockey."

It's an investment, Dubas added, that helped him in the Soo, even if it took years to pay off and even with all of the debates and all the resistance.

In the end, the data helped – and he believes it will with the Leafs, too.

"It is an eyeballs business," Dubas said. "But there's what you see, and being able to incorporate some checks and balances into it with data, and what you can track and pull out and reaffirm. If you can be even 1 or 2 per cent more certain in what you're seeing and decisions you're making, that can be a massive benefit in the long run.

"Things are always evolving. You have to kind of be on the edge." 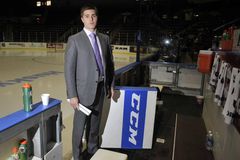 Mirtle: Leafs are finally on board with NHL’s shift from fights to finesse
October 6, 2014 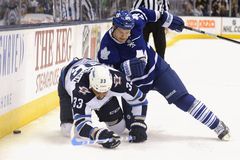 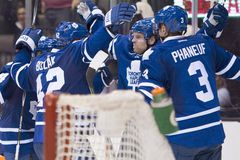 Kelly: Tromping of Rangers shows its too early to judge Maple Leafs
October 12, 2014 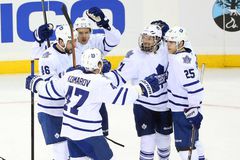 Mirtle: When a doubleheader becomes a double blowout
October 12, 2014 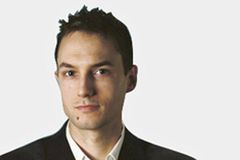