The Toronto Maple Leafs had a lead.

It took a butt goal to do it – off Michael Grabner's hockey pants and into the net, which was probably the only way the ice-cold veteran was ever going to score – but the Leafs were up on the Red Wings in Detroit late in Sunday's game. Anyone who has followed this Leafs season closely knew what was coming next.

A routine save would be blown. There'd be a run of penalties. A Martin Marincin Hail Mary would be intercepted by someone on the other team. Some other calamity would ensure that, somehow, Toronto would lose the game late and in demoralizing fashion.

Beating Detroit was thanks mainly to goaltender Jonathan Bernier's 38-save shutout. It was only the 10th one-goal game the Leafs have won this season, which is last in the NHL. They lead the league in the most one-goal losses, with 25.

Six of their eight two-goal losses, meanwhile, included an empty-netter against – so you can count those in the close-loss department, too.

That's not to sugar-coat what the Leafs are. The rebuild has worked wonders to produce a bad hockey team with a bad record. But you can also see in their record and the way they've lost games that they're not quite this terrible – seven wins in their last 30 games.

Rob Vollman, a Calgary-based statistician who writes for ESPN and NHL.com, has a unique tool on his website called the "Team Luck Calculator" that tries to analyze the relative misfortune of all 30 NHL teams. Luck can be a dirty word in sports, but it's not to the eggheads.

With the NHL standings notoriously close and games so low-scoring, the stats analysts argue that randomness has a bigger impact in hockey than any other pro sport.

And the Leafs are dead last on Vollman's lucky list.

The reasons why are instructive. In addition to being brutal in all those one-goal games, the Leafs have an awful shooting percentage, a bad save percentage (thanks largely to Bernier's mysteriously wretched year), bad special teams and little success in overtime and shootouts.

"The Leafs have most certainly been on the wrong side of the bounces in almost every area," Vollman said.

Some of this is a lack of talent: Bad players are bad shooters and weak penalty-killers, etc. But few could have predicted Bernier's decline prior to the season, or the midseason injury to James van Riemsdyk, who was on pace for a 30-goal season, or the horrific timing of some of the goals against, which often came late in tie games to ensure the Leafs went pointless.

What's interesting is that when analytics people look at this team, they don't see an outright disaster. They point optimistically to what coach Mike Babcock has done with the systems, and the subsequent rise in the Leafs ability to control the puck.

Toronto was a 45-per-cent possession team last season under coaches Randy Carlyle and Peter Horachek, which means they spent a great deal of their games in their own end.

Despite the upheaval on the roster, with 41 different players (and 11 rookies) cycling in and out of the lineup, Babcock has possession up to just shy of 51 per cent this season.

Those numbers have also been trending up of late, as management has shipped out veterans and called up the kids. In the eight games the Leafs have played with fresh faces – led by William Nylander, Zach Hyman and Nikita Soshnikov up front – in the lineup, they're up to 54.5 per cent in possession.

Some of the newcomers are driving that – and it's not only who you'd expect. Frank Corrado, Connor Carrick and even Marincin are posting strong underlying numbers on the blueline. Hyman and Soshnikov have also shown the ability to carry, control and battle for the puck, which is what Babcock and president Brendan Shanahan are looking for.

It's early days, and these are baby steps. The losses are going to keep coming. The Leafs appear to have some nice finds in the mix of young players they've either called up or acquired in the last two weeks, but the roster is still lacking in a lot of ways, especially in the high-end talent department. You can argue they need a No. 1 centre, defenceman and goaltender, for example.

But if you put any stock in advanced statistics, there's also an element of unrepeatability in what the Leafs have done this year. They've been bad, but they've also been luckless – which was actually the best possible outcome when it comes to their draft-lottery odds and their season in general.

Despite it all, they're still on pace for more points than the 68 they had last year. And this appears to be the bottom. 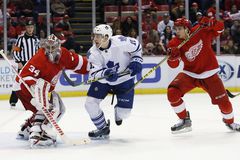 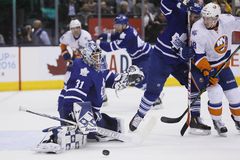 Injuries forcing Maple Leafs to use William Nylander up the middle
March 8, 2016