'You can either make the best of it or you can bury yourself."

Bury is a metaphor a lot of hockey players use when they're talking about the ECHL. It's two rungs lower than the NHL, and the majority of players who get dropped down that far never come back.

But some do. Some even get more than a cup of coffee, earn big money and stardom, and never look back.

On Monday at the Air Canada Centre, Garret Sparks became the 579th player to make the unlikely journey from near the bottom of the North American pro hockey ladder to the top when he started for the Toronto Maple Leafs.

Sparks shut out the Edmonton Oilers 3-0 in his NHL debut, making 24 saves and looking – for the situation – calm and collected on several big stops when the game was in doubt early. He's the first Leaf goalie in history to record a shutout in his debut.

The 22-year-old from just outside Chicago was so solid that, with back-to-back games upcoming and Leafs coach Mike Babcock down on Jonathan Bernier, it's likely Sparks will be getting his second start in a matter of days.

If you had wandered in off the street, you never would have guessed he was only months removed from being an Orlando Solar Bear, playing in a league many hard-core fans rarely consider.

Even the ECHL's name evokes that of a lower minor league. This is a circuit which used to be known as the East Coast Hockey League but, in 2003, became an orphan initialism – an acronym for nothing – as the league spread as far West as Alaska and California.

Now, players sent there call it "The Coast" – a term that can give a young prospect the shakes given the gruelling 30-day bus trips, crappy cuisine and cheap motels that await.

It's as far from the NHL as you can fall and still have a chance of coming back.

"It's a long ways," said Oilers defenceman Brandon Davidson, who offered the "bury" quote up above and spent 11 games with the Stockton Thunder in the ECHL two years ago. "I definitely look back on that stuff and not laugh but realize where I've come from and how hard it's been to get here. It's very humbling."

"It's easy when you get buried in the Coast to throw in the towel and just enjoy playing hockey," said Leafs centre Byron Froese, who spent parts of four seasons in the ECHL. "But when you work hard like he did to get back up, it makes it even more special."

Froese played 112 games in the ECHL all told, but he only boarded a plane once: for the league championship series that started with three games in Anchorage.

So, yes, it's a low tier, but some good players have played there. Vancouver's Alex Burrows is one of the best known skaters who is an alumnus, but plenty of decent goalies had to start there: Braden Holtby, Devan Dubnyk, Michal Neuvirth, Mike Smith and even the Leafs' James Reimer, who's currently out with an injury.

"For goalies, it's good," said Paul Bissonnette, the former Phoenix Coyotes tough guy who was an ECHL all-star back in 2006-07. "You need to be athletic. Lots of blown [defensive] coverage."

It's also good simply for opportunity. Goalies are hard to evaluate without starts, and you can only carry four between your NHL and AHL rosters.

If you have more than two prospects, the ECHL has a net for someone to fill.

Sparks was the Leafs seventh round pick four years ago – right at the end of the draft – and despite his size and athleticism, he was raw. A big kid who was part of the American world junior team in 2013, he had three unremarkable years in the OHL with Guelph before turning pro.

With the Leafs unsure which of their three goaltending prospects would turn into anything, Sparks drew the short straw and spent most of his time in the ECHL.

The benefit of that, however, was he started a lot. A 21-7-3 run with a .936 save percentage with the Leafs ECHL affiliate in Orlando last season earned him full-time duty in the AHL this season.

Two months in, he has been the AHL's top goalie. With Reimer hurt and Bernier in the doghouse's doghouse, it was natural for Sparks to get a look against the struggling Oilers.

It also fits with the Leafs plan to use the ECHL as more of a AA-type affiliate (like in baseball) than NHL teams have in the past. Froese and Sparks are the first success stories of that mindset.

Sparks believes his rise – and that of others in the organization – will inspire Leafs prospects two leagues away that they, too, can make it to the land of big paycheques, charter planes and enormous crowds.

"It's just been an amazing ride for both of us now," Froese said.

"The mentality is there now that everybody has an opportunity," Sparks added. "If you put in the work, you get rewarded."

Sometimes even with an NHL win. 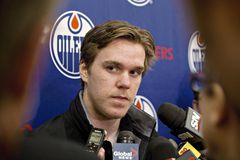 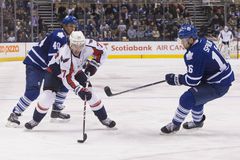