When the Toronto Maple Leafs went for the big fish and signed the $50-million deal in the summer, they weren't expecting a quick return on their investment.

Nothing about this rebuild was supposed to be quick.

Bringing in Mike Babcock was an eight-year enterprise, and his unique skills as one of the best coaches in the NHL was going to be most useful to the Leafs a few seasons down the line, when they were presumably contending for something more than a lottery pick.

However, the Leafs are getting more than they imagined in Year 1.

Only 37 games into his tenure in Toronto, Babcock has transformed a makeshift roster that no one had any expectations for into a possible playoff team. After beating one of the best teams in the league in the St. Louis Blues on Saturday, the Leafs have a 14-8-5 record since the start of November.

That's a 100-point pace and the third-best record in the Eastern Conference in that span.

If not for an absolutely brutal start to the season from netminder Jonathan Bernier, the Leafs would now be in the thick of a playoff race. As it is, they are slowly making up ground and have games in hand on almost every team in the conference.

If they play as well as they have in the past two months the rest of the way, they're tracking to finish with 92 points, which should put them in the wild-card conversation.

Do that and Mike Babcock deserves serious consideration for the Jack Adams as coach of the year.

Which, absurdly, he has never won.

There's obviously a lot of season left and a lot of opportunity for this great Leafs run to go sideways. But their play of late hasn't been a mirage the way it was in so many other recent seasons.

Under Babcock, the Leafs have improved from one of the worst possession teams in the NHL (45 per cent) to league average (50 per cent), making one of the biggest jumps in the league (along with Buffalo and Montreal).

The Leafs have also gone from allowing the most high-quality scoring chances against in the NHL (14 a game) to the fourth fewest.

On special teams, they are first in shots attempted on the power play (up from 25th last season) and second in shot attempts allowed on the penalty kill (up from 26th).

The list of improvements is longer than that, but that's a glimpse of how dramatic some of the shifts have been. In every case, the progress is primarily a credit to systemic and deployment changes brought in by the coaching staff.

They also deserve credit for the fact so many players look better than the past few aimless seasons. James van Riemsdyk, Leo Komarov, Tyler Bozak and Jake Gardiner lead the way there, but it's been a nearly team-wide transformation.

All that said, there's a lot working against Babcock winning the Jack Adams this year.

His roster isn't very good, and it will only get worse when Leafs management sells off its rental players before the Feb. 29 trade deadline.

His goaltenders have been injured and inconsistent, and any coach who picks up votes in April likely had a lot of help from his netminder.

Making the playoffs remains a long shot, with even the most bullish analysts giving them somewhere in the neighbourhood of a 30-per-cent chance. Entering Sunday's games, the Leafs were still seven points back of a wild-card spot and had the fewest regulation-or-overtime wins, which is a key tiebreaker.

Understandably, voters for the year-end awards also almost never give consideration to coaches or players with teams that missed the postseason, regardless of how low expectations were going into the year. (Last season, coaches of non-playoff teams received only one of the 75 first-place Jack Adams votes.)

There are a lot of other worthy candidates for the award, too, such as Lindy Ruff in Dallas, Barry Trotz in Washington – another coach who has inexplicably never won – and even Darryl Sutter in L.A. Their teams should all make the playoffs by large margins, and they have established track records to back up that success.

Too often in recent years the Jack Adams has gone to a one-off: a coach whose underdog team had a fluky, percentage-driven run to success that wasn't going to be sustainable the next season. The last three winners – Paul MacLean, Patrick Roy and Bob Hartley – all fit that description.

If the Leafs somehow keep this up and make the postseason, he would be a fitting winner – and it would finally right a wrong that has for some reason kept him from the trophy for so long.

Even if they don't, Babcock should still get plenty of votes.

He's earned his paycheque so far. 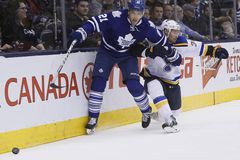 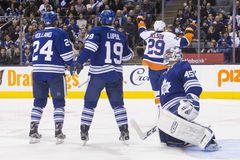