Teams on the rise share one thing in common with teams on the decline – a lack of depth – which usually spells trouble as the playoffs hove into sight.

Lack of depth usually means not enough savvy veterans for the supporting cast and too many youngsters, something that could be said about the Toronto Maple Leafs if you just looked at the birthdays on the roster. However, one reason the Leafs are surging at the halfway point of the NHL season is that a lot of the rookies in the team's supporting cast are almost as surprising as first-year sensations Auston Matthews and Mitch Marner.

There were eight rookies on the roster as of Monday's practice, when the Leafs were preparing to open a four-game home stand Tuesday against the Buffalo Sabres. It can be argued that, in addition to Matthews and Marner, at least four other rookies are making significant contributions to the Leafs' recent 8-1-1 run and to their 10-4-4 record since Dec. 3: forwards Zach Hyman, Connor Brown and William Nylander and defenceman Nikita Zaitsev. Throw in 22-year-old defenceman Connor Carrick, who is in his first season as an NHL regular, and the Leafs are getting a surprising bounty from the kids.

"The first couple of weeks of the season, there was a lot of attention on us and how well [we] were playing," said defenceman Morgan Rielly, another of the youngsters getting rave reviews along with his partner, Zaitsev. "Willie [Nylander], Connor [Brown] and Zach Hyman were there every night playing their best hockey and being a huge part of this team.

"We all know that within this room. They don't get the media attention. They go about their business, play hard every night. They are a big part of this team."

Brown, 23, and Hyman, 24, have played on either side of Matthews for the entire season, and the trio is now one of the best lines in the league. With 28 points in 41 games, Brown is the more offensively gifted, but Hyman never stops checking or digging for pucks.

Nylander has also racked up 28 points – and he has managed that despite bouncing all over the lineup this season, from the fourth line to stints with Matthews.

Hyman says getting to play for the Leafs near the end of last season made his transition from minor leaguer to full-time NHLer a lot easier.

"I got a little taste of it last year so I felt like I wasn't a true rookie coming in," he said. "Rather than not knowing what to expect, I had 16 games last year, which I thought I played well in."

The progress has been so quick that it is hard to believe it will hold for the rest of the season, but the Leafs keep defying conventional wisdom. They have now made inroads on their penchant for blowing leads in the third period. After back-to-back wins over the New York Rangers and Ottawa Senators on the weekend, the Leafs are now third in the NHL for length of time in the lead.

"We're staying in our system and keeping our foot on the gas, rather than sitting back and letting things happen," Hyman said of the difference in the team's third-period play. "We're taking things to the other team now and hopefully continuing to do that."

The Leafs' rise back into a playoff spot, third in the Atlantic Division with six games in hand on the second-place Boston Bruins, has fired up the giddiness quotient among the fans and media. But head coach Mike Babcock likes to think that light at the end of the tunnel just might be a speeding train, so he issued a warning after Monday's practice.

"Let's not get carried away here," he said. "We got a lot of work to do here. We're getting better, I think, [at] understanding what's expected, that we're good enough to win every night if we play right. Those things are positives.

Lamoriello: Maple Leafs ‘a little ahead’ of expectations
January 12, 2017 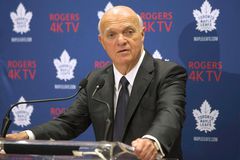 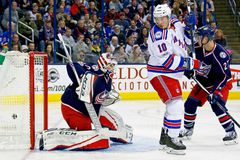 Maple Leafs get a necessary break from NHL postseason madness
January 8, 2017
Follow David Shoalts on Twitter @dshoalts
Report an error Editorial code of conduct
Due to technical reasons, we have temporarily removed commenting from our articles. We hope to have this fixed soon. Thank you for your patience. If you are looking to give feedback on our new site, please send it along to feedback@globeandmail.com. If you want to write a letter to the editor, please forward to letters@globeandmail.com.
Comments