Since taking over as Montreal Canadiens general manager three months ago, Marc Bergevin has worked quickly at getting his team's future settled.

He took a big step toward that goal by signing forward Max Pacioretty to a six-year deal.

"We felt he's a part of our core moving forward," Bergevin said Tuesday at the team's practice facility. "It was something that we wanted to tie up and we figured it was a good deal for us to have him done and he felt the same way, so we're happy that we could reach an agreement."

Speaking publicly about Monday's signing for the first time, Bergevin said Pacioretty impressed him with the way he dealt with a potentially career-threatening injury.

Pacioretty suffered a concussion and a cracked vertebra after being slammed into a Bell Centre stanchion by Boston defender Zdeno Chara in March 2011, but he came back and had a career year last season.

"He's shown character with what happened with the incident, got hurt and came back strong. He's a guy that cares about the team and his teammates," he said.

Both sides showed an interest to get an early start on the winger's next contract. Pacioretty had one year left on his current deal and had often expressed his desire to call Montreal home for years to come.

He said a long-term contract wasn't something that was available to him under the Canadiens' previous management and he wasn't sure what the new regime had in store.

"I was just hoping that they would tell me that I was [part of the core], and obviously they did so by this contract," Pacioretty said on a conference call from his home in New Canaan, Conn.

Pacioretty led the Canadiens in scoring with 65 points last season and his 33 goals came in second only to linemate Erik Cole.

It was a remarkable bounce-back season for the 23-year-old from the injuries sustained in the Chara hit. The Professional Hockey Writers' Association named him the winner of the 2011-12 Bill Masterton Memorial Trophy, awarded to the NHL player who is deemed to best exemplify the qualities of perseverance, sportsmanship, and dedication to hockey.

"I think he's just scratching the surface now," Bergevin said. "He works out, he's committed. I talked with our guys. They felt comfortable and I for sure felt comfortable to bring him back for six years."

Pacioretty hasn't hesitated to acknowledge the roles Cole and centre David Desharnais have played in his success. He's repeatedly said how much he has learned from and been motivated by Cole, who also suffered a broken neck back in 2005-06. He adds that Desharnais "has been huge for my career."

The potential was there for Pacioretty to cash in next summer as an arbitration-eligible restricted free agent. But he didn't want to spend his season with that in the back of his mind.

"Anyone would be lying if they said they don't stress over points or goals if they're playing for a contract," he said. "I have the contract side of things settled now and I can focus on helping this team achieve its ultimate goal, and that's winning a Stanley Cup."

He's the latest member of the Canadiens' young nucleus to be rewarded with a six-year deal, following Carey Price last month and Josh Gorges, under previous management, in January.

"I believe that when you identify the players you like and they're core, you do everything you can to keep them. And they want to stay in Montreal, which is even better," Bergevin said.

But while the Canadiens' GM crossed one item off next summer's to-do list, still one remains on his plate for the current off-season: restricted free agent defenceman P.K. Subban.

Subban, 23, is coming off his entry-level contract and a season that saw him score 36 points, the most among all Canadiens blue-liners and fifth on the team overall.

"He's a good young player. There's a lot of things that comes into play but there's potential there for sure," Bergevin said.

He has remained tight-lipped throughout negotiations with Subban and his agent. And even with training camps scheduled to start in a month's time (pending a new collective bargaining agreement) and fans worried about the delay, Bergevin wouldn't offer anything new.

"Out of respect for P.K. and his agent, I don't want to talk about negotiations in the media," he said. "It's an ongoing process, we're talking and hopefully we'll get to an agreement in time."

Bergevin said his free agent shopping is pretty much done, having filled holes with the likes of forwards Brandon Prust and Colby Armstrong and defenceman Francis Bouillon in July. He did inquire about unrestricted free agent Shane Doan, who seems to be waiting out the Phoenix Coyotes ownership situation before making a decision.

With Subban expected to eat up a large portion of the Canadiens' remaining cap space, it wouldn't seem like the team would have room to add Doan. But Bergevin said space can be found for a player of his calibre.

"You can always make room for players. There are always things that are possible," he said. "If you want a player, you always find a way to get him." 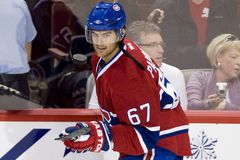 Canadiens, Subban reportedly still talking new deal
August 1, 2012
Report an error
Due to technical reasons, we have temporarily removed commenting from our articles. We hope to have this fixed soon. Thank you for your patience. If you are looking to give feedback on our new site, please send it along to feedback@globeandmail.com. If you want to write a letter to the editor, please forward to letters@globeandmail.com.
Comments