Playing on the road against a quality opponent while trying to break out of a losing skid is just the kind of situation the Toronto Maple Leafs brought Patrick Marleau in for.

Marleau came through by scoring early in the third period and the Maple Leafs beat the Anaheim Ducks 3-1 Wednesday night to end a three-game losing streak. It was Marleau's 100th career game-winning goal.

"Been around a while I guess," Marleau said. "No, it's pretty cool to say you got a hundred of those. Hope there's a lot more where that came from."

Connor Brown also scored and Frederik Andersen stopped 28 shots for the Maples Leafs, who had dropped four of their last five after starting the season 6-1-0.

"I think we did a lot of things better tonight," forward James van Riemsdyk said. "I maybe don't think we did a full 60, but we found a way to win and that's the most important thing. We know we can be better still."

Ondrej Kase scored for the Ducks, who had won two straight. John Gibson made 26 saves.

Marleau puts the Maple Leafs back in front 1:09 into the third with a powerful backhand shot for his 513th career goal.

"It was a great job by him outmuscling the guy in front there," said defenceman Ron Hainsey, who had two assists. "I can't really speak on what it's like to have 100 game-winners, really, or 100 goals, so that's pretty incredible. Obviously speaks to his career's longevity."

Maple Leafs head coach Mike Babcock shuffled his lines in an attempt to break out of the funk, asking Marleau to play centre with Brown and van Riemsdyk on the wing among other changes. The shakeup worked as the Maples Leafs controlled the first and third periods.

The Maple Leafs took the lead at 7:54 of the first period when van Riemsdyk threaded a pass to a charging Brown at the front of the crease. With Brown a step in front of two Ducks defenders, all he had to do was reach out his stick and tip the puck between Gibson's legs for his fourth goal.

It was van Riemsdyk's seventh assist in 10 games against the Ducks.

But the Maple Leafs almost immediately gave back the advantage. Kase lobbed the puck towards the net where it struck defenceman Andreas Borgman in the right ankle and careened into the net.

After scoring five goals in 53 games as a rookie last season, Kase has the same number through nine games this season.

There was no scoring in the second period, thanks largely to the iron. Auston Matthews hit the post on a breakaway after a penalty expired to start the second, while Ducks forward Rickard Rakell and defenceman Francois Beauchemin each had shots hit the crossbar during power plays.

The Ducks were 0 for 4 with the man-advantage.

"You make your luck," Ducks head coach Randy Carlyle said. "We weren't sharp on the power play. We've got to be better. We've got to deliver in those situations, for sure."

Jakob Silfverberg had the tying goal waived off with 1:38 remaining after the officials ruled he kicked the puck in. The play stood as called after a brief video review.

Can the Leafs reclaim their local lustre?
October 31, 2017 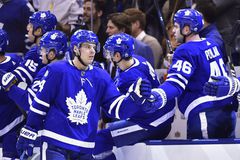 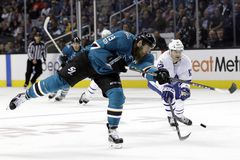 opinion
At the moment, the Leafs just need good, not great, goaltending from Andersen
October 29, 2017 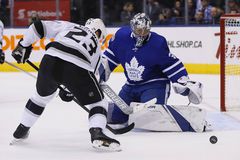