Seth Jones had a goal and an assist, and Joonas Korpisalo made 39 saves to help the Columbus Blue Jackets beat the Toronto Maple Leafs 4-2 on Wednesday night.

Lukas Sedlak, Pierre-Luc Dubois and Alexander Wennberg also scored for the Blue Jackets, who never trailed in snapping a two-game losing streak. They moved them into tie for second place in a traffic jam of teams battling for the top spot in the tough Metropolitan Division.

Korpisalo, starting in place of Sergei Bobrovsky on the first night of a back-to-back, allowed a second-period goal to Jake Gardiner and another in the third to Mitch Marner in playing one of his strongest games of the season. Toronto (21-14-1) has lost four of its last five.

Former Blue Jackets goalie Curtis McElhinney, starting for Toronto in place of Frederik Andersen on the second leg of a back-to-back, had 33 saves.

Sedlak scored for the Blue Jackets (21-13-1) with about seven minutes left in the first period. Matt Calvert gathered in the puck in the right corner and fired out to Sedlak, who spun and snapped it in off McElhinney's hip.

Jones got a short-handed goal with 1:15 left in the period. He intercepted a pass in the defensive zone, carried the puck all the way down the ice and wristed it past McElhinney's glove for his sixth of the season.

The Maple Leafs cut it to 2-1 at 4:26 into the second period after William Nylander knocked down a Columbus pass and set up Gardiner with a nice circle-to-circle pass.

The Blue Jackets answered with a power-play goal, with Cam Atkinson shovelling a rebound out from the back wall to Dubois, who tapped it in. Jones also picked up a helper on the goal.

Wennberg capped the scoring for Columbus in the third period, with Atkinson getting his second assist. Marner then made it 4-2 with about three minutes left.

The Maple Leafs were without top scorer Auston Matthews, who missed his sixth game with an upper-body injury. Zach Werenski sat out with an undisclosed injury for Columbus. 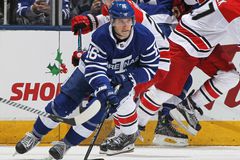 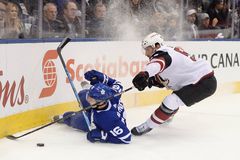