Game 1 for the Toronto Maple Leafs was understandably The Auston Matthews Show, with the rookie's record-setting four-goal debut making headlines around the hockey world earlier this month. But Game 7? This was Mitch Marner's turn.

The Leafs were in tough this week in their doubleheader against the NHL's Florida contingent. Thursday night, it was the Panthers with the full press, two days after Toronto was thumped 7-3 by the Tampa Bay Lightning.

But even when Florida rang up early goals in the first and second periods to take 1-0 and 2-1 leads, the Leafs found an answer. Or, more accurately, Marner did.

The 19-year-old local kid picked up three assists on all the Leafs' goals in a 3-2 win over a Panthers team that is expected to be one of the best in the East. Two of his setups were highlight-reel material, with linemates James van Riemsdyk and Tyler Bozak the beneficiaries of perfect feeds.

"If you're Bozak or van Riemsdyk, you know you're getting two or three real good looks a game out of the kid," head coach Mike Babcock had mused before the game.

Marner went into this season with unrealistically low expectations. He was the best player in junior hockey last season (and perhaps the past two), with an absurd 160 points between the OHL regular season and playoffs in 2015-16. For some reason, however, the discussion around the Leafs' fourth overall pick (2015) in training camp was whether he would stick with the team beyond the nine-game mark.

Well, seven games in, he has become perhaps the eam's most important offensive catalyst – or at the very least, is in a three-way tie with Matthews and William Nylander – and there is little chance he will ever play in another league again.

What's been impressive beyond the points is Marner's attention to detail. He has won puck battles. He has got in lanes and blocked shots, despite his slender frame. He has been good through the neutral zone, rarely turning over pucks.

Against the Panthers, his line was at 75-per-cent possession through the first two periods, despite taking a lot of D-zone draws and facing Florida's underrated second line centred by Vincent Trocheck. They were dominant.

The knock on Marner has always been his size, but you didn't have to look further than the Leafs opponent to see the sea change that's happened in that department in the NHL. Florida dressed six forwards who were listed under six feet tall – and the Panthers have been one of the top play-controlling teams in the league in the early going this year.

Off-season bargain signing Jonathan Marchessault – all 5-foot-9 of him – had Florida's two early goals, continuing a remarkable start in which he's emerged as one of the NHL's early scoring leaders (nine points in seven games).

If you have skill these days, size doesn't have to be a factor.

That appears to have become the motto for a lot of good teams, including both Florida clubs. It may yet become true for Toronto, too, with Marner the standard bearer.

For all their woes in goal (Frederik Andersen again had a so-so night) and defensively, there's now zero concern for the Leafs offensively. The injection of these three dynamic kids – and Nikita Zaitsev and Connor Carrick on defence – has completely changed the way Toronto plays.

Next to only the Oilers, the Leafs (2-2-3) are the most improved goal-scoring team in the NHL, with 24 through seven games. Four of their top five point producers are rookies, too, with van Riemsdyk the only veteran making that cut.

Other teams in the league are coming into the Air Canada Centre and increasingly talking about the Leafs as a team that is difficult to match up against because they have high-end threats on three separate lines. If you focus on shutting down the Matthews-Nylander combo, then JVR-Bozak-Marner can burn you. If you focus on Marner, it might be Nazem Kadri – who has quietly put up five points with weaker wingers – that breaks through.

For the first time in a long, long time, the Leafs are varied offensive threat, not needing to rely only on Mats Sundin or Phil Kessel to produce.

Now they just need to get the other end of the ice sorted out – and they might have something. 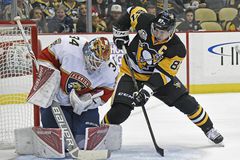 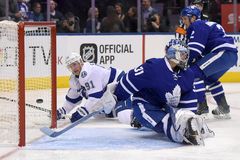 Prejudice, KHL development contributing to fewer Russians in NHL
October 26, 2016
Follow James Mirtle on Twitter @mirtle
Report an error Editorial code of conduct
Due to technical reasons, we have temporarily removed commenting from our articles. We hope to have this fixed soon. Thank you for your patience. If you are looking to give feedback on our new site, please send it along to feedback@globeandmail.com. If you want to write a letter to the editor, please forward to letters@globeandmail.com.
Comments