He stands on the ice like some sort of exotic bird, with long, spindly legs and an awkward, upright posture that you rarely see at this level of professional hockey.

Quiet and unassuming off the ice, Martin Marincin is the same way on it, often in the background instead of the fray. Prior to Tuesday's game, for example, he spent much of the warm-up standing alone, watching his teammates fly around the ice.

Marincin is an unlikely first pairing defenceman in the NHL. He has one goal and 16 points in 137 career games and looked out of place even as a third-pair option for much of the year. But the Toronto Maple Leafs have bumped him up with Morgan Rielly of late and given Marincin an average of 23 minutes a game in his last 13 games, including a career high of nearly 30 minutes in a 1-0 win over Detroit on Sunday.

In Tuesday's 4-1 win over the Tampa Bay Lightning, he even chipped in with two assists for the first multi-point game of his career.

It has taken some time, but his coaches and teammates are beginning to see what Marincin does well – and it is unique.

"He's got a good stick," head coach Mike Babcock said. "He's a real good skater. Still got to work on his shot. But he can pass the puck, and he's got good hockey sense."

"He's got a great reach," added rookie Connor Carrick, who has played more with Marincin than any other Leafs defenceman since joining the team. "He's a big body. He tries and keeps his game simple for the other four guys around him. That really helps you anticipate where the pucks going because he's predictable – in a good way."

The Leafs acquired Marincin, 24, from the Edmonton Oilers for a fourth-round pick last summer. It was a trade that was likely a result of a big endorsement from members of Toronto's large analytics department, many of whom believe in the benefits of possession stats like Corsi.

Marincin has flaws. In fact, he drove the Oilers fan base crazy and has detractors already in Toronto. He is 6-foot-4 and thin. He is not physical and, as noted above, his offensive game is almost non-existent at this level. He has also cost the Leafs more than one game this season with a pass to the other team.

But the analytics – and by extension the analysts – love him.

He is also the kind of player – unwanted and potentially underrated – that Leafs management are scouring the league for, a cheap bet that can do some unsexy things well and provide enough value to outweigh the negatives.

It's a mindset that's not all that different from the Moneyball push in baseball more than 10 years ago for players that could get on base. Only, in this case, what Marincin does well is simply sort of get in the way.

Especially as the other team is trying to get into the Leafs zone.

"Stick detail right around the defensive blueline is huge," Carrick explained. "You've got to be able to create some disruption and create some panic in the offensive player. That's what you're always going for. If you don't get a piece of the puck, at least try to make them move it before they're 100-per-cent clear on what they're trying to do.

"The idea is you have such great gap up the entire length of the ice that you are in the attacking player's mind the entire time. Because this whole league knows you're always a turnover away from a puck in your own net. That's what you're trying to create. The fear.

"You've got to create that fear of a turnover in them. If not an actual turnover itself. With his size and his reach, he's able to do that a little bit sooner than a smaller guy."

The impact that has on possession is dramatic. Teams are often forced to dump the puck into the zone when Marincin is on the ice, which ultimately allows the Leafs to recover the puck and get it back into the offensive end.

On the season, Marincin is at 55-per-cent possession, which is 11th among defencemen who have been full-time NHLers. (Drew Doughty, of the L.A. Kings, is first.) While some might assume that has to do with Marincin's limited role much of the season, the reality is his numbers are similar since he was elevated into big minutes.

The question for the Leafs is whether or not that specialty is enough to keep him in a prominent spot in the lineup. Is possession, without points or other tangible impacts, enough?

Given the way many in the organization have praised Marincin's game of late, the answer appears to be yes. And it now feels much more likely he'll have a job on the Leafs blueline next season than not.

"Marty's playing great," Rielly said. "He's really grown a lot over the course of the past few months and he's really taken the advantage of the opportunity he's had. It's been fun to watch."

"He's a thin guy so he's got to work extra hard on his body," Babcock said. "He needs an NHL summer. One where you actually commit to being in the league [by putting] some meat on your bones. Then he's in position to be a real good player in the league. But he's really come. It's good for him." 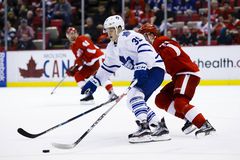 Fizzling rivalry between Leafs and Sabres has become all about the tank
March 7, 2016 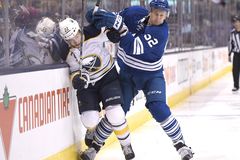