When it comes to his battle with diabetes, Max Domi wears his affliction on his sleeve. Or close enough: On his left forearm, the captain of the OHL's London Knights sports an elaborate tattoo advertising that he is a Type-1 diabetic.

"It's really just a fancy medic alert," the engaging 19-year-old said. "I used to wear the bracelet, but going out and being irresponsible, I always used to lose it. And I wanted a tattoo so this was as good an excuse as any to get one."

The Toronto native cemented his status as one of the world's top junior players when his indefatigable performance at the recently concluded world junior championship helped Canada win gold. Domi scored a goal and chipped in with two assists in a riveting 5-4 win in the deciding game against Russia at Toronto's Air Canada Centre on Jan. 5. He finished among the event's leading scorers and was chosen as the tournament's best forward, all the while winning over Canadians with his feisty, in-your-face demeanour.

A top prospect of the Arizona Coyotes of the NHL, Domi is capitalizing on his new-found celebrity status to speak out on diabetes, a subject he is equally passionate about since being diagnosed seven years ago. Domi and the Knights have been besieged with more than 70 requests from media organizations and the public since the gold-medal game, most looking to speak with the young hockey star about living – and playing – with diabetes.

"The one thing I really try to emphasize is, what I'm going through is just the same thing that every other diabetic is going through," the son of NHL enforcer Tie Domi said in an interview on Tuesday. "There's no real difference just because I happen to be a hockey player. But what I've found is that for someone who has just been diagnosed, it's a hell of a lot easier to listen to advice from someone who has been through it, or going through it, than from some doctor who doesn't have diabetes."

Diabetes is a chronic, sometimes fatal disease in which the body either cannot produce insulin or cannot properly use the insulin that is produced by the pancreas.

In Canada, there were 3.3 million people living with diabetes in 2014, of whom between 5 and 10 per cent would have Type 1, which for Domi and others will be a lifelong concern.

Having a high-performance athlete such as Domi come forward and proclaim that he not only has diabetes but is living successfully with it is an important message, disease experts say.

"I think there is that sense with people when they are first diagnosed that they can't live normal lives," said Jan Hux, the chief science officer with the Canadian Diabetes Association. "Max is a phenomenal example. He's a poster child for, 'You can do this.'"

Domi is not the first athlete to live with diabetes and forge a career. Jay Cutler, the quarterback of the NFL's Chicago Bears, has it, as do Brandon Morrow and Dustin McGowan, who both pitched for the Toronto Blue Jays last season.

As for Domi, he was first diagnosed when he was 12 years old. "I was coming back to Toronto from a hockey tournament in Michigan and like every five minutes I had to ask my Mom to pull over to go to the bathroom or to get a drink," he recalled. Leanne Domi was concerned, and the next day she took her son to the doctor, where the diagnosis was made.

"The first question I asked was, 'Can I still play hockey?'" Domi said.

Then it was off to Toronto's Hospital for Sick Children for additional testing. That was followed by about two weeks of what amounted to diabetes boot camp for Max and his parents, learning the ins and outs of dealing with the disease.

It was at the hospital where Domi first learned about Bobby Clarke, whose scrappy play and toothless grin made him an icon with the rough-and-tumble Philadelphia Flyers teams of the 1970s. Clarke also had diabetes, and his story was being showcased on a television show that happened to be playing in a hospital waiting room. Domi was heartened to learn about a hockey player with diabetes who went on to enjoy a fruitful, 15-year NHL career. Clarke was the Flyers captain, played in more than 1,000 regular-season games, scored 358 goals, won two Stanley Cups with the Broad Street Bullies and starred for Team Canada in the 1972 Summit Series against the Soviets.

"This guy's the man, he's the captain of the Philadelphia Flyers, he's tough as nails, he's got great hair," Domi said he remembered thinking at the time. "I looked him up online for a few days in a row and saw that this guy was a legend, that he was unbelievable."

Domi has worn No. 16 on his jersey ever since as a homage to Clarke, who sported the same number.

Obviously, Domi had to make some big adjustments. There were daily injections of insulin that were not enjoyable for someone who detests needles. And there were strict restrictions on his diet to control his blood-sugar level from rising too high or falling too low, a demanding regimen for a kid who admittedly enjoyed wolfing down candies.

Domi endured the injections for two years before turning to a pump, a small computerized device that he now wears on his hip nearly all the time – including on the ice – that helps deliver insulin into the body. That, along with the careful monitoring of his diet, has allowed him to stay ahead of the disease.

"For me, it's actually been a blessing in disguise," Domi said. "I've basically had to change my eating habits in order to stay healthy while trying to be a professional hockey player at the same time. And really, what's wrong with that?"

Editor's Note: An earlier online version of this story identified the Arizona Coyotes as the Phoenix Coyotes. This online version has been corrected. 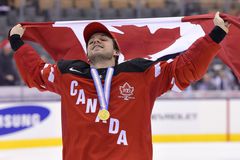 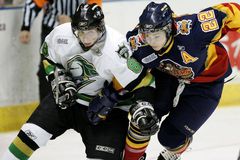