The Hart Memorial Trophy for the NHL's most valuable player almost always trips up voters because of the way the award is narrowly defined. Officially, the Hart goes to the player "adjudged to be most valuable to his team" – a small, but nuanced difference from "most outstanding player," which is actually what the Ted Lindsay Award honours and is voted on by the players themselves.

Some years, a single dominant Hart Trophy candidate neatly fits the bill for both definitions. Last year, it was Sidney Crosby; the year before, Carey Price. But there have also been years when a dominant NHL team has co-MVPs, which then diminished the Hart Trophy aspirations of each.

This year has been unique because, for the longest time, there were three serious candidates, one at each position – goal, defence and forward.

In goal, you had the Columbus Blue Jackets' Sergei Bobrovsky, who took last year's 27th-ranked team and had it in contention for the President's Trophy right up until the final fortnight of the season.

Until the early part of March, San Jose Sharks defenceman Brent Burns was the undisputed catalyst, offensively and defensively, for a team that led the Pacific Division most of the season. No NHL defenceman has won the scoring title since Bobby Orr in 1975 but Burns was in the mix for three quarters of the season, an extraordinary achievement in this low-scoring era.

But for all that Bobrovsky and Burns meant to Columbus and San Jose, it is impossible to dispute the remarkable value that Connor McDavid has brought to the Edmonton Oilers. Now in his sophomore season after a broken collarbone limited him to only 45 of a possible 82 games a year ago, McDavid met and exceeded all the hype and hyperbole that accompanied his NHL arrival which is, in itself, a remarkable development.

When teams play Edmonton, their game plans centre on stopping McDavid. Most nights, they have to settle for limiting his impact. He has been a consistently unstoppable force – his speed, his reach and his puck-handling skills making him the most consistently dangerous offensive player in the league.

In two years, he has become the undisputed face of a franchise that has seen a parade of No. 1 overall draft choices come in, unable to produce that sort of impact.

In fact, it was McDavid's emergence that gave GM Peter Chiarelli the will and impetus to trade away two previous No. 1 overall picks, Taylor Hall and Nail Yakupov, to clear the way for McDavid, and his right-hand man, Leon Draisaitl, to take over the team's leadership group.

McDavid was the youngest captain in NHL history and sometimes, in the past, that distinction has proved to be counterproductive. Vincent Lecavalier wasn't ready for it when he was appointed a young captain in Tampa. Gabriel Landeskog has struggled with his on-ice game since he became captain in Colorado. Even as accomplished and experienced a player as Anze Kopitar, who is wearing the C for the first time in Los Angeles this season, saw the extra weight of the responsibility spill into his on-ice performance.

But McDavid and that singularly driven personality of his has handled it all in stride, the way he has handled practically everything in stride thus far in his NHL career.

Nerves don't seem to bother him. Pressure galvanizes rather than paralyzes him. The only genuinely accurate comparison is to the young Crosby who, a dozen years into his career, still has that enduring passion to get incrementally better every year.

For both Crosby and McDavid, being great isn't good enough. They want to approach immortality and, helpfully for their respective clubs, would set aside personal accolades to achieve team goals. Crosby also won the Hart trophy in his second NHL season and has since gone on to win the Stanley Cup twice.

McDavid currently leads the NHL's overall scoring race with 97 points – but the real measure of his success (and why he will ultimately romp to the Hart) is how his performance has had an impact on the Oilers' results.

With him limited by injury last year, the Oilers missed the playoffs, finished last in the conference and were 29th overall. This year, they will make the playoffs, and with two games remaining in the season, need only a single point to become the first Oilers' team since 1986-87 to earn 100 points in the standing.

In a year in which there is no shortage of qualified Hart Trophy candidates, including Crosby, that sort of impact sets McDavid apart. No one playing in the NHL did it better this season – or has been more valuable to his team.

Rookie of the year

In terms of immediate impact, the NHL's rookie class of 2017 just might be the greatest in history, with up to eight first-year players who would be under serious consideration for the Calder in a different year. But Matthews and Laine genuinely lived up to their 1-2 billing in last June's entry draft. Matthews is a complete two-way talent a la Anze Kopitar and Laine a remarkable finisher, a la Alex Ovechkin. The fact that the Leafs are in the playoff hunt while the Jets aren't will ultimately tilt it toward Matthews.

Coach of the year

Usually, the broadcasters who vote for this award tend to give it to the coach who oversaw the biggest year-over-year turnaround. If that pattern holds, it'll be a three-horse race among McLellan, Babcock and Columbus's John Tortorella, who steered three of the four worst teams in the NHL from a year ago straight up the standings. But Quenneville has taken a Chicago team in constant transition – seven Calder eligible players played for the Hawks this year – and consistently kept them at the top of the NHL charts, an extraordinary if frequently overlooked skill.

Columbus has a lot of hardware candidates, but no player has contributed more to the turnaround than a healthy Bobrovsky, the 2013 Vézina Trophy winner, who practically played every game in the first half, thanks to a comparatively light schedule and turned a deep but not particularly star-studded team into a regular-season powerhouse.

All three of the primary Norris candidates delivered eye-catching offensive numbers. For most of the season, Burns was actually hovering among the NHL's overall scoring leaders before his totals dropped off in the final month. But Karlsson has added a shot-blocking component to his other many attributes and helped turn a team that was 25th defensively a year ago into a far stingier group. And lest people forget, the Norris officially goes to the player deemed to have "the greatest all-around ability in the position."

Over time, the Selke has morphed into a different animal and doesn't just celebrate defensive prowess. Instead, it generally goes to the NHL's best all-around forward, which this year happened to be the remarkably efficient Toews. Captain Serious helped the Blackhawks become the class of the west with his faceoff proficiency, attention to defensive detail and saw his game spiced with an extra offensive dimension this year. 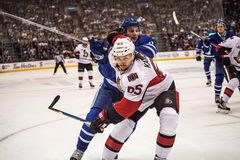 While some players pan NHL Olympic decision, Ovechkin plans to ignore it
April 4, 2017
Connor McDavid’s mom wants him to ‘smell the roses’ during MVP-calibre season
April 4, 2017
Follow Eric Duhatschek on Twitter @eduhatschek
Report an error Editorial code of conduct
Due to technical reasons, we have temporarily removed commenting from our articles. We hope to have this fixed soon. Thank you for your patience. If you are looking to give feedback on our new site, please send it along to feedback@globeandmail.com. If you want to write a letter to the editor, please forward to letters@globeandmail.com.
Comments