One of Ralph Slate's great scores arrived unexpectedly through an eBay dealer he often bought from.

The man behind HockeyDB, the statistics site originally known as the Internet Hockey Database, had paid $50, not knowing exactly what forgotten corner of hockey history he would find in a stack of envelopes. When the package finally arrived, he discovered a decade's worth of game sheets half a century old from the Eastern Hockey League, whose tumultuous brand of hockey in part inspired the 1977 movie Slap Shot.

The granular detail, of referees under assault by coaches and players, was a bonanza.

"Just amazing. Most people don't appreciate this the way that I do," said Slate, who by day works as the principal data architect at New England's electric power system operator. By night, he's the brains behind one of hockey's most popular online destinations for statistics and facts about the game's most prominent and most obscure participants – past and present.

HockeyDB's busiest day of the year will occur on Wednesday with the arrival of the National Hockey League's 3 p.m. ET trade deadline. Every year fans swarm the site to get a quick lowdown of all the players who've been moved. Two years ago on deadline day, Slate registered some 215,000 visitors, a record for his site and more than double the daily average. On days such as those, the site occasionally crashes.

Slate's love of hockey and history – and his tech savvy – underpins HockeyDB, which gets about 1.3 million unique visitors a month. What began as a curious college student's attempt to locate the alumni of his school hockey team grew into a quest with no finish line.

The website made its debut on Nov. 30, 1996, two months before Connor McDavid was born and two years before Google was incorporated.

Slate has spent about 20 hours a week maintaining HockeyDB over the years. During its two decades of operation, he's compiled a set of encyclopedias' worth of digital information: some 186,531 players, 7,220 teams, 416 leagues, 2,131 logos and 6,071 sets of hockey cards.

Fans seeking NHL information account for the majority of traffic to the site. But a dive to the depths of something as simple as a spelling mistake can yield humorous returns, such as the difference between Wayne Gretzky, the Great One, and Wayne Grotski, who played several seasons of Junior A in Edmonton in the 1970s.

The stats and facts sprawl to lesser-known tangents of the sport such as the Tropical Hockey League, which featured four minor pro teams in Miami for one season, 1938-39, and was the first hockey played in the southern United States.

The quickest way to see HockeyDB's depth and breadth of information is to click on its Morning Report. Current standings and basic stats unfurl for 56 different leagues, from juniors through collegiate to overseas and lower-level North American minor pros. Discover, for instance, that Ahmed Mahfouz of the Port Huron Prowlers has a sizable lead in the Federal Hockey League scoring race.

The pursuit of obscure information fascinates Slate, and history has always been a passion. He was chair of the Springfield Historical Commission of Massachusetts for a dozen years, and his home in that town is a mile down the road from the Naismith Memorial Basketball Hall of Fame. (The YMCA at the corner of State and Sherman Streets, where James Naismith invented the game in 1891, was demolished long ago; today, it's a McDonald's and a strip-mall parking lot.)

The Eastern Hockey League game sheets emerged, sequentially and neatly organized, from the estate of a man who had been the secretary for the league.

"I buy a lot of things on eBay," Slate said. "I almost passed out when I saw what it was."

The was so much detail unavailable anywhere else.

For example, on Nov. 11, 1966, when the Jersey Devils beat the Charlotte Checkers 6-2, the Checkers didn't handle losing well. They had been up 1-0, but the Devils tied it early in the second period, at which point Charlotte coach Fred Creighton was tossed "for hitting the referee with water bottle throw [sic] from bench." In the third, as Jersey went up 5-2, Charlotte's Grant Warwick made "menacing gestures at lineman with stick" and got a 10-minute misconduct. His anger boiled over. In the penalty box, Warwick verbally threatened the referee and received a game misconduct. Then he "assaulted referee with stick from penalty box."

Current challenges in the search of stats include French hockey from back in the day ("there were a lot of guys who played in France"); the Junior A British Columbia Hockey League prior to the late 1990s; and the Eastern Junior Hockey League, in Slate's neck of the woods, which played from 1993-2013 ("the information exists out there, but I've never been able to find it").

"People sort of expect that my website should be complete and finished," Slate said. "But that's not how I approach it. There's always going to be more to find." 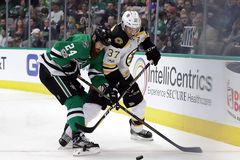 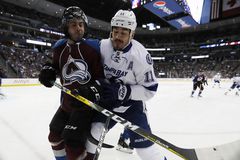 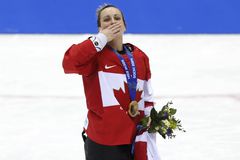