'No cameras. No cameras, guys."

It was the chaotic half hour after Game 2 of the Stanley Cup final, with nearly a hundred media from around the world crammed into the Tampa Bay Lightning dressing room, searching for answers after a wild finish for the home team.

On one side of the room, defenceman Anton Stralman was playing coy when asked, several times, why starting netminder Ben Bishop had twice left what became a 4-3 win over the Chicago Blackhawks in the third period.

On another, rookie Cedric Paquette was explaining in a thick French accent what scoring a pivotal goal in the biggest game of his life felt like.

Quietly, in one corner, Andrei Vasilevskiy – tall, boyish and serene – stepped in front of a smaller throng. To his left was Lightning director of public relations Brian Breseman.

He was the man yelling for the cameras to back off, a unique request in an NHL dressing room. To his right was Kirill Kisselev, the lone Russian reporter, who Vasilevskiy would turn to for a translation every couple questions.

For a 20-year-old goaltender from a half a world away, who barely speaks English, it should have been terrifying – almost as terrifying as coming in cold for those nine harried minutes in a Cup final game.

The Lightning flew to Chicago on Sunday with a split in the series but a huge question on the injury front. The goalie known as Big Ben has been the team's mainstay in the crease all year – with 40 wins during the season and a steady presence through three playoff rounds – but may not be available for Game 3 in what will be hostile territory at the enormous United Center.

Blackhawks fans are expecting to anoint their team – a veteran group favoured by most in the hockey world coming into the series – Cup champs for the third time in six years.

A goalie most will have never heard of, and who has appeared in only 19 NHL games, may now be standing in the way.

Vasilevskiy is no ordinary prospect. Taken by the Lightning 19th overall in the first round in 2012, he has already been touted as possibly one of the greatest Russian goaltenders ever, and was playing for the national junior team at age 17, rare for a netminder.

There have already been comparisons to Hall of Famer Vladislav Tretiak. And, last year, at 19 years old, Vasilevskiy received Russia's prestigious Order of Honour, after winning gold at the world championship.

Born in Tyumen in Siberia, some 2,500 kilometres east of Moscow, he grew up a goalie's son. Father Andrei Sr. played for years in Russia's second division – mainly in Tyumen, which is not a hockey hotbed – before becoming a goalie coach for Ufa's junior team.

His career meant the family was well off, and both brothers – Andrei and Alexei – have ascended to pro hockey at a young age, with the elder a small, skilled defenceman in the KHL with Yekaterinburg.

Alexei's first purchase after signing that contract was a flashy Mercedes for his father.

"Andrei had a very privileged pedigree," explained Slava Malamud, a Russian sportswriter who covers the NHL. "And had a very solid technique even at a young age."

Malamud calls Vasilevskiy "extremely confident." After he was taken by Tampa – the first-ever Russian to be the first goalie selected in an NHL draft – Vasilevskiy said simply that he had expected to go in the first round.

He also expects to be an NHL star, following in the footsteps of his idol, Columbus Blue Jackets goalie Sergei Bobrovsky, who encouraged Vasilevskiy to come to North America at a time when many Russian prospects are staying home.

"I am the goalie Tampa has been looking for," he told Malamud.

The Lightning might need him to be faster than they ever anticipated. Wanting to avoid culture shock, they eased Vasilevskiy into duty in his first season in North America, starting him in AHL Syracuse, where he posted strong numbers (a .917 save percentage) and quickly supplanted veteran Evgeni Nabokov as Tampa's backup.

With the Lightning facing a cap crunch in the coming years – needing to re-sign captain Steven Stamkos and give raises to budding stars Tyler Johnson, Nikita Kucherov and Ondrej Palat – it's possible Vasilevskiy becomes the franchise's starter in the near term.

If Bishop can't play the remainder of the finals, and the young Russian shows he can handle the spotlight, that could accelerate his already meteoric rise.

Few in the organization doubt he will get there.

"I know we have two unbelievably capable goaltenders," Lightning coach Jon Cooper said. "When Bish had to leave, there wasn't an ounce of stress on anybody on our bench. I mean, the kid proved it when he went in. He was great."

"We have a lot of confidence in Vasi," Johnson added. "He's been great all season for us. We see him in practice. He's a competitor."

"He's a quiet guy," his countryman Kucherov said. "He knows what to do. He's professional, you know? He's just waiting for his chance."

This could be it.

Lightning even series with Blackhawks in barn-burner Game 2 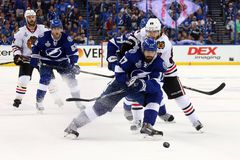 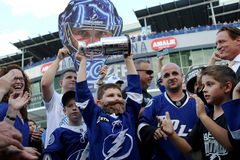 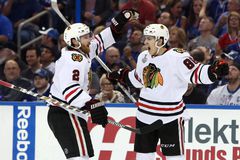