The great migration of NHL players to Europe is about to go into reverse.

Some of the nearly 200 players who spent the lockout with European clubs had already started tricking back in recent days. That will become a flood after that the league and NHL Players' Association reached a tentative agreement early Sunday morning.

They will have the advantage of having played in games in the last three months while those who elected to stay home will be playing catch-up during a quick training camp before the truncated regular season opens later this month.

"I've been working out hard on the ice and in the gym and I'm mentally anxious to get back on the ice (for games)," said Vancouver Canucks forward Alex Burrows, who stayed home for the lockout. "We've been deep in the playoffs the last few years, so to get a rest and be able to work out and stay in the gym a little longer can be a benefit too.

"You try to make a negative into a positive."

The Kontinental Hockey League was a favoured destination, especially with the Russians as Pittsburgh's Evgeni Malkin, Washington's Alex Ovechkin and New Jersey's Ilya Kovalchuk were among that league's scoring leaders, just as they usually are in the NHL.

Bruins teammates Patrice Bergeron and Tyler Seguin and Ottawa's Jason Spezza all chose Switzerland but decided to return to Canada after the Spengler Cup tournament in late December.

Boston and Philadelphia led NHL teams with 11 players each who played in Europe, while Ottawa and the New York Islanders had 10 and Montreal had eight.

Generally, players signed contracts that allowed for a return when the lockout ended. Most played for little money, with some teams picking up prohibitive insurance costs against injury in lieu of salary. Montreal's Tomas Plekanec, who earns US$5 million per season in the NHL, reportedly played in the Czech Republic for a salary the equivalent of five cents.

Some spent the entire three months in Europe, others went over later and a few had only quick stops before returning to North America.

They included Winnipeg forward Evander Kane, who had an eventful lockout. The big winger played 12 games with Dinamo Minsk in Belarus before he was let go for what the team said was a failure to adapt to KHL hockey.

Kane got into more hot water in mid-December when he posed on Twitter with stacks of cash in his hands in Las Vegas, which some saw as the wrong message while idle players were working on a new contract.

Some players are not expected to return at all, including Alexander Radulov and Andrei Kostitsyn, who were let go by the Nashville Predators after they were suspended for breaking curfew during the playoffs in May. Both are playing in the KHL. Kostitsyn's brother Sergei was signed to a new contract by Nashville, however.

Many European players went back to their home countries, including veteran Jaromir Jagr, who played for a team he owns in the Czech Republic.

A lot of North American players went over as well, although not all could go because most leagues had rules limiting the number of foreign players.

Burrows said players had a variety of reasons for going or staying home.

"Guys have families. Guys have different contracts, or are at different stages of their careers," he said. "A lot goes into it.

"Personally, we have a second kid on the way. My wife's due in a couple of months. So we'd rather spend quality time back home and spend the holidays with the family in Montreal."

Pittsburgh star Sidney Crosby, coming off concussion trouble, wasn't about to risk further injury by playing in Europe. One wonders what his insurance would have cost if he had. The Canucks' Daniel and Henrik Sedin said they would only go home to play in Sweden if the entire season was cancelled.

Same with Washington Capitals defenceman Roman Hamrlik. At 38 and near the end of his career, the Czech elected to work out with other locked out players in North America.

"I'm in a different situation because I'm an older guy and I have a contract with the Capitals," he said. "If I go play for my hometown team and I get injured and then they sign a deal here, I don't think that would be the best solution for me.

"I was just hoping (the lockout would end), and trying to keep in shape by skating with the guys."

Many European clubs were eager to sign NHL stars. Others refused to have any.

Los Angeles Kings forward Dustin Brown said he wouldn't go to Europe because it would mean taking a job away from another player. Some North Americans who play regularly in Europe got bumped by incoming NHLers.

Perhaps now they'll get their jobs back, and European leagues can go back to normal, as they did after the lockout that erased the entire 2004-05 campaign.

How do you feel about what's left of the NHL season?
January 6, 2013
CBA Timeline: Looking back at negotiations between NHL and NHLPA
January 6, 2013 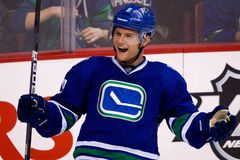