Milan Lucic is a bear of man. Everything about him is oversized, from his 6-foot-3, 228-pound frame and the force of his personality to the way he plays hockey – mean and on the edge.

Some NHL players just fill space in a dressing room. When Lucic walks in, he radiates a natural ebullience, and it is contagious. And so the fit for Lucic – going from Boston, where he played the first eight seasons of his career, to the Los Angeles Kings – has been seamless.

Lucic makes his first return to Boston Tuesday, when the Kings start a season-high seven-game road trip. They're comfortably atop the Pacific Division and plotting another long playoff run.

For Lucic, the timing really couldn't be better. He's been with the Kings for five months now, long enough to distance himself from his days in Boston, during which the Bruins won a memorable Stanley Cup in 2011. But he's also looking forward to renewing acquaintances with old friends and the Boston staff, many of whom he plans to see before the teams hit the ice.

His return to Beantown may be a big deal in hockey circles, but, as he says in an interview, "I never asked to get traded."

"Obviously, when it happened, I was really excited it was the Kings where I ended up – because of the success they've have and the style they play," he continued. "It was one of those things that just fit, just worked. Getting a chance to play with the players I get to play with now – world-class centremen with Kopi [Anze Kopitar] and [Jeff] Carter, and Quickie [Jonathan Quick] in the net, and one of the best defencemen [Drew Doughty] – there's an opportunity that presents itself here, on a championship team.

"Sometimes, a fresh start is good, too. You get rejuvenated and refreshed and excited about things. You almost feel like a rookie again … before I got here, I really didn't know anyone. Coaches, trainers, players, there were a lot of new names I had to learn. It was a test to see if I could remember them all. Talk about a fresh start. I don't think it could get any fresher than this."

The Kings acquired the big winger from the Bruins at last June's NHL entry draft, giving up goaltender Martin Jones, defensive prospect Colin Miller and a first-round pick in exchange. Los Angeles, which won the Stanley Cup in both 2012 and 2014, missed the playoffs by two points a year ago, and organizationally, the Kings believed they needed to make some changes.

So they acquired Lucic, whose style suits coach Darryl Sutter's philosophy that big teams, playing with a physical edge, ultimately win in the postseason.

"He's meshed well with everyone off the ice, which is probably the hardest thing, because the on-ice stuff generally takes care of itself," Kings captain Dustin Brown said of Lucic, who has 12 goals, 18 assists and 66 penalty minutes so far this season. "He's one of those guys you're glad is on your team. He shows up every day with a good attitude, which is a big part of what we try to do in this room. Regardless of whether we're winning or not, it's about having the right attitude – and he's been great for us."

Other than Doughty, most of the Kings' core players tend to be quiet, low-key individuals, which is why Lucic's effervescence has been so welcome.

"He's definitely a guy who keeps the team loose," Doughty said. "Every time he walks in the room, he has a presence. He's going to make you laugh.

"Our team, we like to have fun together. It's like a brothership in here. Bringing him into it, it couldn't have gone any better. He's awesome off the ice. On the ice, he's great. Everyone on our team loves him."

The Kings have recently re-signed Kopitar to an eight-year contract extension that will average $10-million a season. A year down the road, they will need to give raises to a couple of improving young players, Tyler Toffoli and Tanner Pearson.

Lucic's current contract expires at the end of this season and the hope internally is they can find a way to make the dollars work so he can play out the rest of his career in southern California.

In the meantime, Lucic says: "I'm having a lot of fun, and I'm enjoying being an L.A. King. With me being a free agent, I hope I get to be here more than one year – and I'm looking forward to seeing how the rest of this season unfolds." 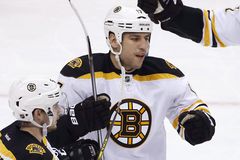 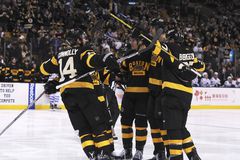 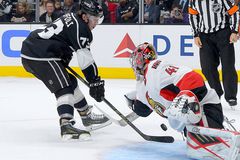