Thrilled for the excited teammates of her seven- and nine-year-olds, Dostaler hadn't thought about the extra expenses that will pile up travelling from their home in Madoc, Ont., to finals in Forest, Ont., and Port Huron, Mich. Other tournaments have cost the family between $500 and 1,000 a weekend in gas, hotels, food and other fees.

"Once you've signed on for the season, you're expected to be there and play, whether you budgeted for it or not, and you wouldn't miss it for anything," said Dostaler, who estimates she will spend at least $5,600 this season for her three kids to play hockey (two boys on rep teams and a three-year-old daughter in tyke).

"We know the costs can get ridiculous, but we try to find creative ways to make it work for our kids, because we love it."

Released Monday, a Royal Bank of Canada survey of parents and volunteers across Canada from varying levels of minor hockey found families spend an average of $1,500 a year on hockey-related costs. Many involved in hockey say they spend much more, which they must get creative to afford.

Less than half of respondents felt their leagues were sufficiently funded, and some 82 per cent said corporate Canada should be give more to the sport.

Dostaler runs a popular Facebook.com page called Hockey Mom in Canada. On the topic of costs, many parents posted they don't keep a hockey budget, but just close their eyes to the tally and pay up.

Dostaler said Tuesday parents are savvy about cost-saving ideas on those wallet-busting tournament trips, like car pooling, packing food to avoid drive-thru stops and sharing team pot-luck meals in the hotel in lieu of restaurant food. Some even travel in mobile homes or trailers.

Tom Thomas said he spends upwards of $10,000 a year for his 17-year-old daughter to play AAA midget in Winnipeg. The city's ice time has shot up from about $135 an hour to $185 in the last three years due to a shortage of rinks. Plus, the team will travel to Ontario so their players can compete in a marquee tournament in front of university scouts.

"I know families who take out lines of credit to allow their kids to play hockey," said Thomas, the director of female hockey for Hockey Winnipeg.

Several programs across the country have helped families with the costs, like Canadian Tire Corp. Ltd.'s Jumpstart or RBC grants. (Hockey Winnipeg received one such grant, which will be used in part to help introduce new Canadians and aboriginal youth to the sport.)

In Toronto, the Moss Park Hockey League is free, catering to families who could not otherwise afford to put their four- to 15-year-olds in hockey.

Ice time is donated by the rink, while equipment is on loan to those in need. The league now has 300 children active, plus a waiting list. It got an RBC grant and also hold creative fundraising events like dances and auctions.

The University of Prince Edward Island is attempting to give new Canadians a chance to try the game in a low-cost, low-commitment setting. Its grant will fund introductory skill sessions by providing players equipment on loan.

"The biggest financial challenge for families can be just getting to try the game in the first place," UPEI women's hockey coach Bruce Donaldson said. "If they want to play, we will do our best to give them the opportunity." 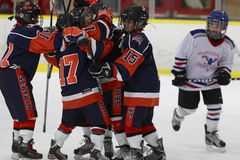