It was expected to be such a down year that even the bookies were taking action on it.

But while the over-under for "how many Canadian NHL teams will make the playoffs?" was set for 2.5 by oddsmakers back before training camps opened, Canada's seven NHL teams have so far defied those odds.

Most of them, anyway.

Even after a weekend full of losses, if the playoffs started today in the NHL, five Canadians teams would make the postseason. On average, Canada's seven teams were on pace for 93 points after Sunday's games – and that's with Edmonton dragging them way, way down.

Add in Toronto's strong start (98) and Winnipeg fending off a tough Central Division (97) and it's all rather impressive.

In fact, the Canadian NHL teams haven't averaged more than 92 points as a group since 2006-07, which was also the last year they had a better overall record than U.S.-based teams.

Because it's still relatively early in the season and few saw this coming, it's worth asking if all these surprise showings are for real. Can they keep this up?

Well, already, the Canadiens are starting to falter. Their loss to Dallas on Saturday dropped Montreal to 1-5-1 in their last seven games as they prepare to face Vancouver on Tuesday at the Bell Centre.

That wasn't altogether unexpected, and there could be more pain for the Habs here as they try to turn things around.

The other team that's primed for a tumble is Calgary, as like the Habs, the Flames are not a strong possession team and have at times relied too heavily on shooting and save percentages early on.

That said, the Oilers are going to win more games the rest of the way and balance things out – no matter how bad you think they are, they're not 50-points bad – and the other three teams are all relatively close to where they deserve to be.

It's highly possible, in other words, that Canadian teams do end up at that 92 points or better mark.

If that happens, at least three or four of them will make the playoffs, with an outside shot that five Canadian teams are there for the first time since 2004.

That's a long way from last year when Montreal was the only one that made it, and it's a credit to the teams that have managed to rebuild a little quicker than pundits imagined they would.

Except for Edmonton. They're dragging everybody down. 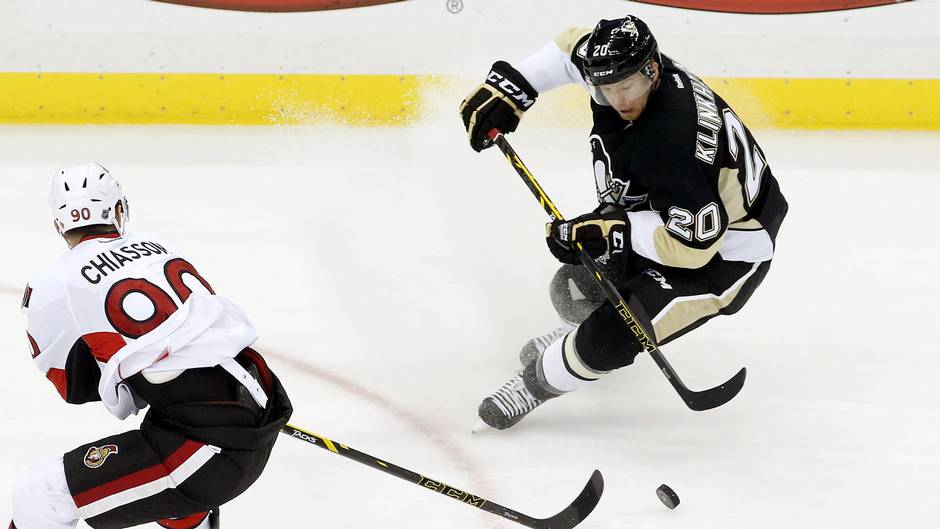 The trade was but a footnote over the weekend, but the team with the NHL’s best record (18-6-2) quietly got a little bit deeper in the last few days.

He’s no household name, but Rob Klinkhammer could become one playing with the powerhouse Penguins in the playoffs. They sent prospect defenceman Philip Samuelsson – son of Ulf – to Arizona for the rights to the hard-hitting, hard-working Klinkhammer, who has become a pretty effective player for the Coyotes.

An offensive contributor in the minors, what “Bobby Klink” brings at the NHL level is some grit and a strong possession game (54 per cent career) on a third or fourth line, something he showed in his debut with Pittsburgh on Saturday. Playing with Marcel Goc and Jayson Megna, Klinkhammer didn’t start a single shift in the offensive zone, but had a 69-per-cent possession rating by the end of the game, meaning they spent more time in Ottawa’s end than their own.

The Penguins made a huge push in the summer to be a better possession team than they were last year under different management, and it’s really paid off. They’re sixth in the NHL in score-adjusted possession (53 per cent) after finishing 16th there last year.

Add in a terrific power play and that makes them a contender.

A lot of the credit for that goes to new coach Mike Johnston for preaching a much different style than Dan Bylsma’s dump and chase, but the Penguins also made some nice value bets on Christian Ehrhoff and Blake Comeau that have helped as well.

On a team that’s top heavy on the salary cap because of superstars Sidney Crosby and Evgeni Malkin, having that kind of cheap-but-effective depth is vital. That doesn’t always mean adding points. Sometimes it can be buying possession. 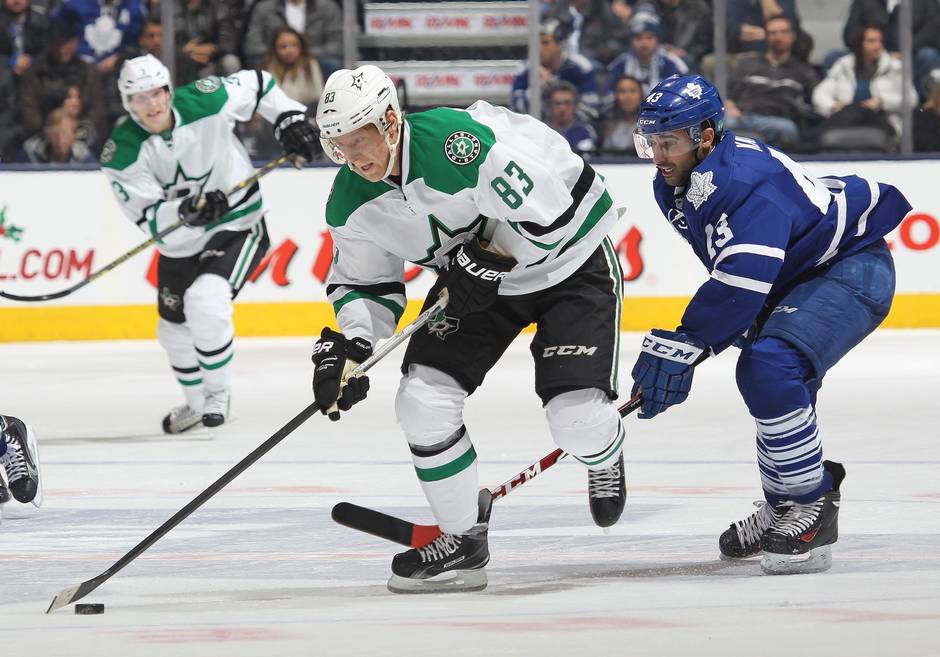 Not every player that was an analytics darling is having a great year. Look no further than long-time Oilers winger Ales Hemsky, who was a healthy scratch on Saturday despite the fact he’s in the first year of a three-year, $12-million contract in Dallas.

Why’d he sit? Well, Hemsky has only seven points in 25 games despite ample time with Jason Spezza (nearly half his even strength minutes) after the pair caught fire in Ottawa late last year.

Hemsky has certainly had some bad luck – with one of the lower on-ice shooting percentages in the league – but with the sheltered minutes he’s getting, much more was expected production wise.

Being a scratch could serve as a wake-up call – and coincide with Hemsky getting a few more bounces.

If not, it could be a long three years. 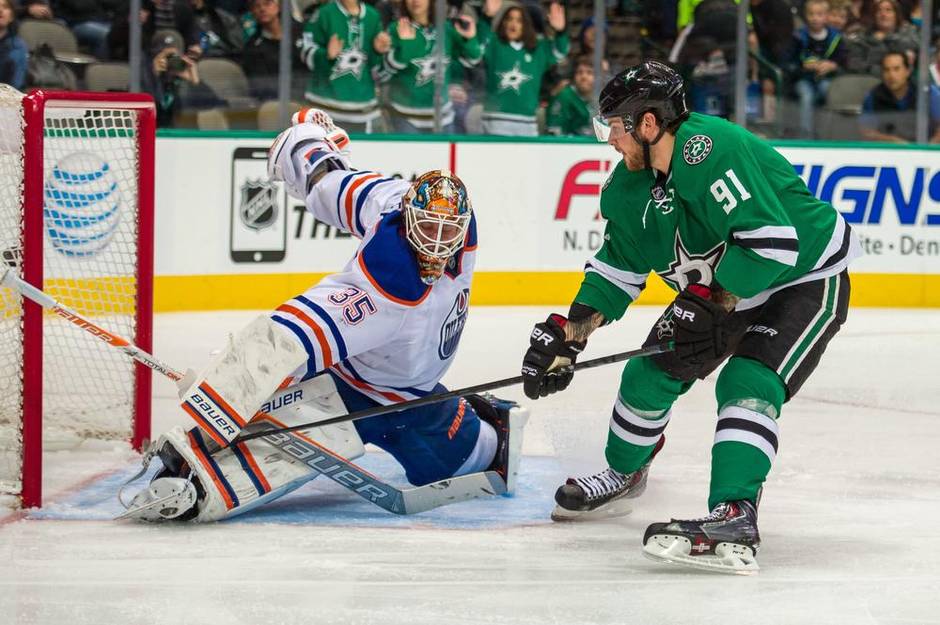 Speaking of the Stars, one of them is making real noise in the pursuit of the NHL’s goal-scoring crown. Tyler Seguin rang up another two goals to extend his lead over Vladimir Tarasenko, Rick Nash and Steven Stamkos, who altogether make up the top four candidates for the Rocket Richard Trophy so far.

After 27 games, Seguin is on pace for a ridiculous 64 goals, a mark only Alex Ovechkin has matched in the last decade.

As is often the case, that’s driven by a huge shooting percentage right now. Seguin has only been a 13 per cent shooter since his sophomore season and is at nearly 20 per cent right now, meaning we can expect his torrid goal pace is going to dry up some.

In his favour? He’s young, so he’s only getting better and his percentages can improve. He’s also producing about four shots a game like clockwork for Dallas, which is among the elite players in the game.

If he keeps that up, even if he regresses and shoots around his career average the rest of the year, Seguin will still score roughly 48 goals, which will be close to what’s won the trophy in recent years.

He needs to watch out for Stamkos, though. The Lightning captain’s shot is so powerful and accurate that he scores on a ridiculous 18 per cent of his shots on goal, and as such, his current numbers aren’t likely to dip at all.

If Stamkos gets hotter as the season wears on, he can easily surge past Seguin and wind up in the 55-goal range.

Tarasenko, meanwhile, is the wild card, as the young Blues sniper has played only 129 NHL games and doesn’t have much of a sample size to forecast his talents from. His goal totals aren’t overly shooting percentage driven right now, either, so it’s certainly possible he keeps up his current pace and is chasing 50 goals come April.