With 20 per cent of the NHL season left to play, the Vézina Trophy discussion is basically over. Now folks have moved onto the Hart Trophy.

In both cases, Carey Price is the front-runner.

While there's a phobia among voters in voting for a goaltender as the NHL's most valuable player, the sense is he will probably win both.

Barring an extraordinary falloff, he should.

The Montreal Canadiens are not a great team, but they've got a great record. After Price shut out Arizona on Saturday, the Habs points percentage improved to the best in the league: a 112-point pace.

If they ultimately win the Presidents' Trophy, that one should also be handed over to their goalie, as he's been the driving force behind most of those wins and extra points.

Price has been so good, his exploits have become routine.

Other than Price, 30 goalies have started at least 30 games in the NHL this season. In this group of starters, not including Price, the average save percentage is .9162.

Price is in another stratosphere at .9363. To put that in context, in Hall of Famer Dominik Hasek's best season, he had a .9366.

In fact, in NHL history, only two goalies – Hasek and Tim Thomas – have played 50-plus games in a season and had a save percentage higher than .933. Price is poised to become the third.

Save percentages have risen substantially over the years, so Hasek still stands alone if we adjust for era, but Price’s .936 is very, very good even in that context.

How big of a difference has it made in Montreal’s season?

They would be below average, in other words, and likely wouldn’t make the playoffs – never mind win the conference.

Price is quite literally lifting his team out of mediocrity with one of the better goaltending performances in recent decades.

If that’s not worth a Hart Trophy, what is? 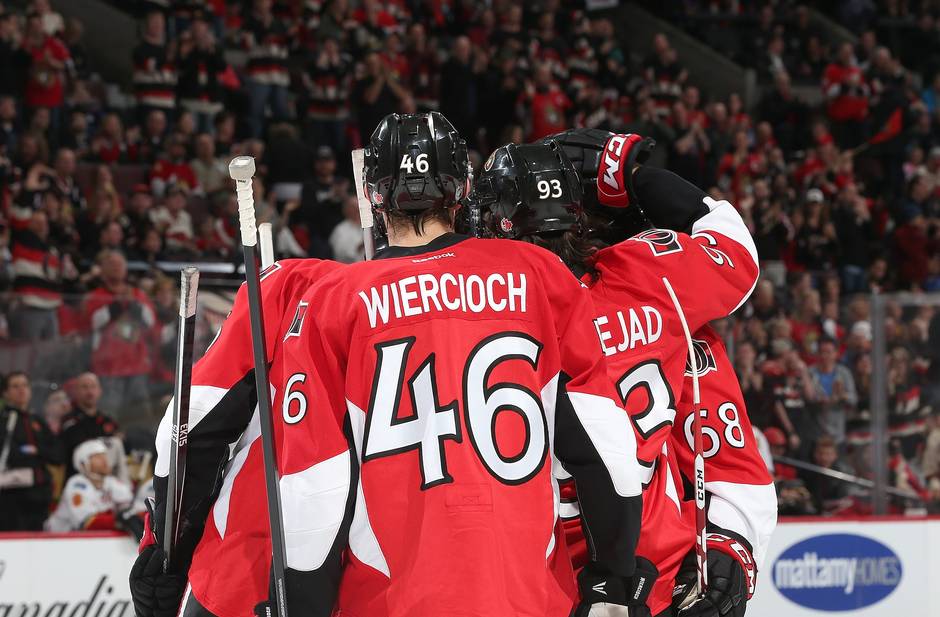 There was a terrific piece over at TSN late last week by Travis Yost that looked in-depth at Senators defenceman Patrick Wiercioch and how he fits into their plans.

In a nutshell? The NHL’s newer numbers love him and Ottawa’s brass doesn’t, to the point that he spends plenty of time as a healthy scratch.

Wiercioch is far from the only player in this situation. Tim Erixon, who the Leafs claimed on waivers before the trade deadline, has helped push play in the right direction in games with Columbus and Chicago, with a positive possession rating in soft minutes.

But at 24 years old, the former first-round pick has bounced around a lot – the Leafs are his fifth NHL team already – and there are plenty of concerns beyond his ability to move the puck.

The biggest critique? Erixon isn’t very strong – not on the puck, but just generally – and hasn’t put in the work to get better in that area.

His second game as a Leaf in a blowout loss to St. Louis on Saturday left something to be desired, too.

Still, a strength issue is fixable. The Leafs are looking at these numbers, and they’re focusing on getting younger and on player development, so Erixon is a reclamation project worth attempting in the tail end of a lost season.

He’s also a gamble that fits in with the eye test versus stats debate that Leafs assistant GM Kyle Dubas spoke about at length in his presentation at the Sloan analytics conference last week.

“A big defenceman who just takes the puck and throws it off the glass and hits people is extremely valuable to our eyes because we know what he does every single day, but is that truly effective?” Dubas explained. “Is he always stuck in his own end? Is he using his skills to move the puck up the ice or putting it out and then having to defend again?

“I’ve always questioned this, and I really hate that quote: ‘He plays a simple game.’ Through the use of analytics, [we can see that] players who play like that generally only play on defence and that’s not where any team wants to be.”

The Corsi stat certainly has its flaws and limitations, but what it tells you on a very basic level is which players are in the offensive zone more than the defensive one when they’re on the ice. It’ll be fascinating to see whether there’s anything there with these two defencemen who are at a crossroads in terms of whether they’ll have long NHL careers or not.

Whether Erixon works out or not, this is all worth paying attention to. Generally speaking, the kind of players succeeding on bluelines around the league has been evolving in recent years toward more agile, puck-moving types, and you can expect Toronto will follow that trend under Brendan Shanahan.

Rising: Teams due for better luck

1. Chicago. The Blackhawks were dealt one unfortunate blow when Patrick Kane went down with a serious injury, keeping him out until at least Round 3. They’ve had a tough time scoring all season, though, even with Kane, and a lot of that is percentage driven (only Arizona, Carolina and Edmonton have converted on a lower share of their shots at even strength). Chicago was the second highest scoring team in the NHL last season; this year, they’re sitting 15th. This team has more to give in that department, either at the end of the year here or in the playoffs.

2. Winnipeg. The Jets added depth at the deadline, and they’ve been the NHL’s top possession team (55.3 per cent) over the last 20 games. So why’s their record slipping? The surprisingly good goaltending they had in the first half of the year simply hasn’t been there. This week in particular is a huge test for Winnipeg as Dustin Byfuglien and Bryan Little are hurt, and they’re headed on the road. It would be a huge shame if they miss the postseason after the strides they’ve made.

3. Detroit. Don’t sleep on the Red Wings. Yes, they had only five wins in their last 12 games after Sunday’s loss in Boston, but they’ve had a tough schedule and are coming out the other end of it relatively unscathed. If they finish strong, Detroit has a shot at winning the East. And coach Mike Babcock should finally get his first Jack Adams Award.

Falling: Teams likely to cool off

1. Minnesota. The Wild – and specifically Devan Dubnyk – have been on fire. They were an incredible 18-3-2 going into Sunday’s game on a run largely powered by phenomenal goaltending, with their rise timed almost directly to when they airlifted in Dubnyk from Arizona for a third-round pick. This is a good team that was sunk by awful netminding early, but to expect Dubnyk to keep up a .940 save percentage is a bit much and they’ve been fortunate to win some of their recent games. Still, you don’t want to face this team in Round 1: They could easily knock off a great team.

2. Ottawa. Another remarkable goaltending story. Andrew “The Hamburglar” Hammond has been phenomenal in running up a .954 save percentage in his nine NHL games this season, but how long can this Cinderella story continue? His pedigree suggests it won’t, but goalies can surprise. (Look no further than Dubnyk.) The Sens deserve full marks for their turnaround since the coaching change – a 96-point pace under Dave Cameron – but they’re running out of runway with under 20 games left.

3. Anaheim. Even the Ducks themselves have been concerned they’ve been relying on their young goaltenders too much. They have the best record in the West right now and are on pace for 111 points, but they’ve won an awful lot of one-goal games, including eight in shootouts. The worry is their record lies, at least a little, and they’re not nearly as good as the wins and losses show.