While we can’t do much about the first two, we can kvetch about the player selection a little and offer an alternative team.

The problem isn’t so much with fan voting. Having a so-called starting six of Corey Crawford, Patrick Kane, Duncan Keith, Brent Seabrook, Jonathan Toews and Zemgus Girgensons is fine, especially given all the Blackhawks that were voted in are coming from what’s likely the best team in the league.

No, more troubling were some of the other 36 selections to fill out the roster. Some aren’t exactly stars. Some aren’t the best players on their teams.

Some aren’t even having good seasons.

And, no, we’re not picking on Nick Foligno, who has been a great story this season.

The NHL bends over backward to get an “all-star” from each team and without enough regard to who’s actually deserving. Let’s rectify that here, using a few traditional stats and some new ones as well.

No P.K. Subban at the all-star game is a crime against humanity – or at least humans who pay to take in the all-star festivities in Ohio. No Erik Karlsson? Or John Carlson? Or Kris Letang or Johnny Boychuk, who has been a huge in Long Island’s renaissance? One thing for which we’ll give the NHL credit: Dustin Byfuglien deserves to be there, even if only to see by how much the he wins the hardest-shot contest. They could even put in a hardest bodycheck one for him, too. 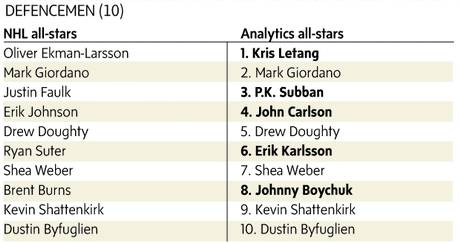 The NHL got the tap-ins. Sidney Crosby, Steven Stamkos, Alex Ovechkin: Obviously those guys aren’t going to get this weekend off to go to the Bahamas like the other 95 per cent of the league. We also like that good two-way forwards such as Patrice Bergeron, Anze Kopitar and Tyler Johnson have been honoured. But no Kyle Okposo, who has been one of the highest scoring players over the past two seasons, now as John Tavares’s right-handed man? Or how about Jets captain Andrew Ladd, who has led Winnipeg to the verge of its first playoff berth in nearly 20 years? And we like to see Joe Thornton, Pavel Datsyuk and Jaromir Jagr to be there for some real star (and Corsi) power, too. Those old guys are still getting it done. 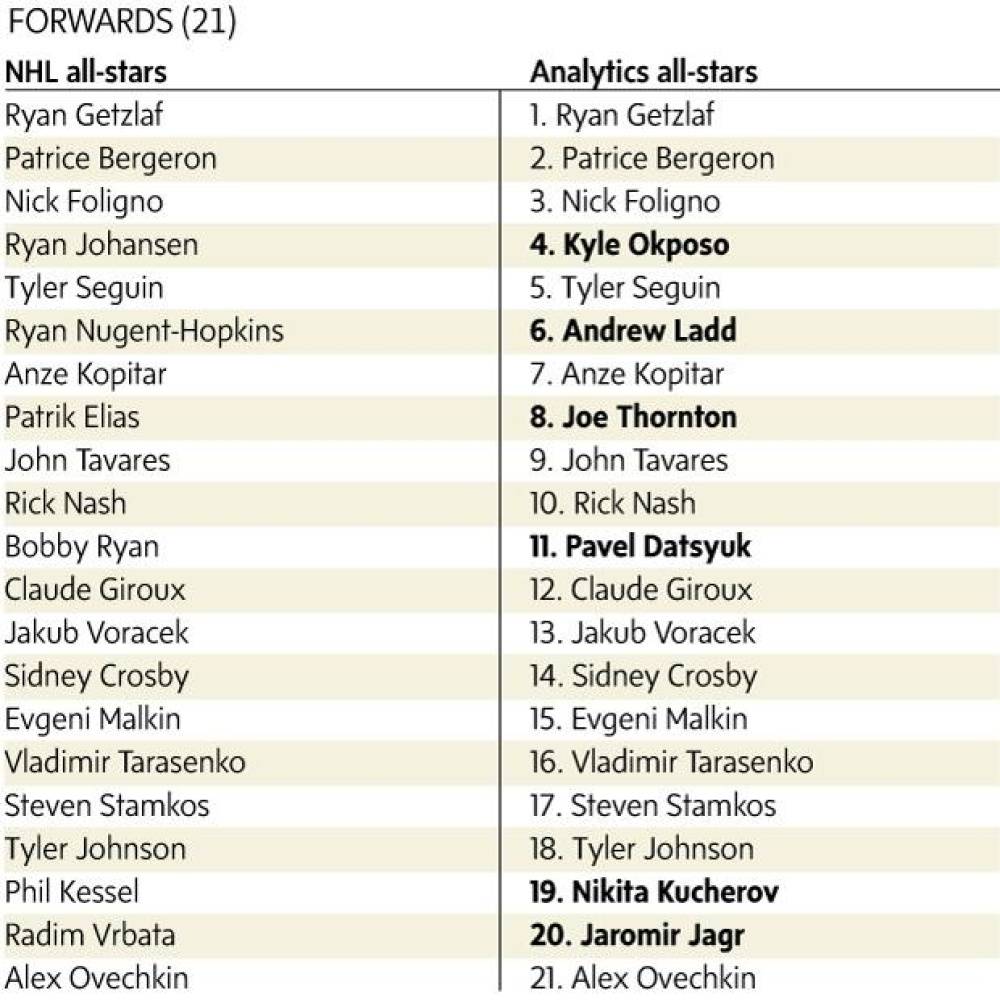 Nowhere does the NHL get it closer to right than in goal. Pekka Rinne, Carey Price and old-man Roberto Luongo are all playing very well and deserve to be the all-stars. at the all-star game. Sergei Bobrovsky is understandable as a hometown selection, but Jimmy Howard as the only Red Wing? (Where’s centre Pavel Datsyuk?) We choose instead to recognize the big runs lately by Henrik Lundqvist and Braden Holtby.