The debate raged right from the start of the warm-up on Saturday night, as when James Reimer led the Toronto Maple Leafs off the bench, it was clear he would be starting in goal against the Chicago Blackhawks.

Against one of the best teams in the league?

Setting aside the question of whether or not Jonathan Bernier should be the team's undisputed No. 1, it was the right call – and not only in hindsight, given Reimer went on to play brilliantly in the third period to secure the 3-2 win.

Statistically speaking, it's almost never a good decision to start a goalie two nights in a row, and Bernier had started in Columbus on Friday.

On average, the tired goalies' save percentage was only .901, well below the league average. The rested goalies' was .912, which is closer to what you should expect from a capable backup. That's a difference of preventing an extra goal every three games, which really adds up over a season.

This is a good rule of thumb for the Leafs to keep in mind, in particular, as they have 18 back-to-backs this year, tied for the third most in the NHL. The team's new analytics group will likely advise coach Randy Carlyle that those should be 18 guaranteed starts for Reimer, regardless of how well Bernier is playing.

On Saturday, making the switch paid off when the tired Leafs wilted in the third period. They were outshot 26-7 and out-attempted 47-12, but Reimer stood tall, making several terrific stops for his third win of the year.

Even if you believe Bernier is a far superior goalie – which is debatable given their career save percentages are .918 and .915 – the rest factor outweighs any advantage.

Especially when you consider the injury risk a tired goalie could face. 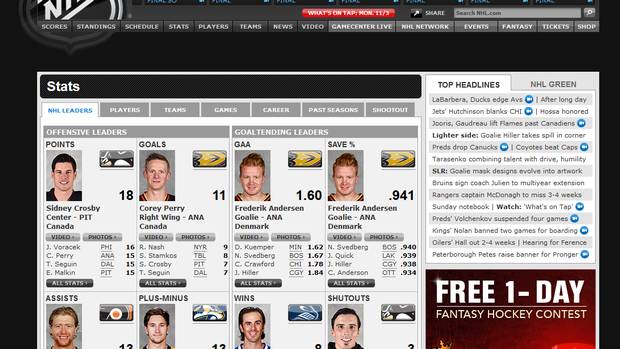 Quietly behind the scenes, the NHL continues to wrestle with how best to incorporate analytics into what it does.

They’re already well behind the other major professional sports, with MLB and the NBA giving baseball and basketball fans incredible access to real-time data online. Hockey fans, meanwhile, have to dig around online in various locations to get something as simple as shot totals when certain players are on the ice.

With the Leafs buying extraskater.com and wiping it from the Internet, a handful of new stats sites have appeared, with war-on-ice.com and puckalytics.com the two best available. Should the league get into the game, however, it could mean NHL.com becomes the go-to source, with far more data being made available than ever before.

Prior to training camps opening, several sources at the league said they were in “advanced discussions” toward improving NHL.com’s stats offerings. Of late, talk is that the league has started working with a software company to get something done.

It’s not known if anything will launch this year, but there’s certainly some untapped revenue there for the league if it can figure this out and become a destination point for data.

Until now, it’s been savvy Internet entrepreneurs pulling in that traffic, beating the NHL at its own game. 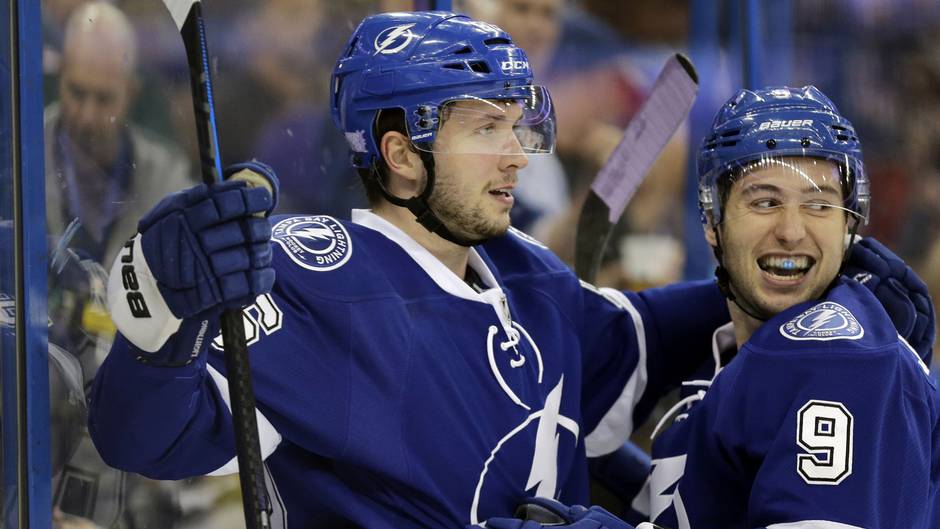 Not a household name by any means, but if he keeps this up, he will be. The undersized Russian winger has 11 points in 12 games, including a hat trick last Tuesday, and has been one of the top five possession players in the game after the first month. The Lightning have quickly become a dominant offensive team thanks to their youth and depth, with Tyler Johnson and Ondrej Palat emerging last season and Kucherov so far this year. GM Steve Yzerman’s doing a lot of things right.

Another up-and-coming young star playing in Florida. Big and strong on the puck, Bjugstad has made great strides since he was picked 19th overall four years ago. Bjugstad and his linemates have badly outshot other teams this year (73-36 at even strength) but been snake-bitten, including hitting several posts. Expect him to start putting up points soon.

Leads the NHL in minutes played with 29 a game. No defence pairing leaguewide is controlling the play as well as Suter and Jonas Brodin right now, which is a big reason the Wild are 7-3-0. Suter is one of the league’s great stories early on, especially considering the fact his father, Bob, died of a heart attack right before camps opened. 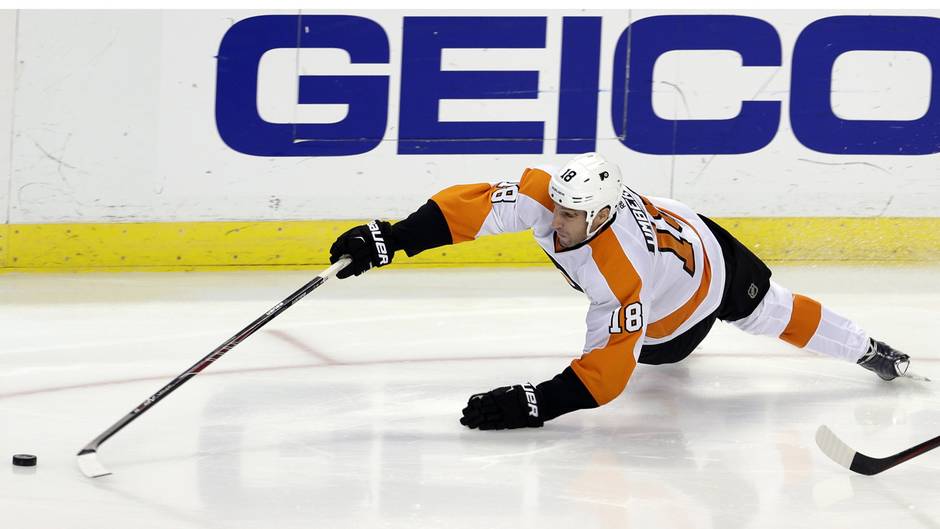 Yikes is the only way to describe Smith’s start to the year. Two weeks ago, Coyotes coach Dave Tippett admitted he was concerned over his goaltender’s psyche. Smith has since been better but won only once in five starts, including losses to Florida and Carolina. His save percentage (.873) is last among goalies with more than five starts. His team? Last in the West.

The Umberger for Scott Hartnell trade hasn’t worked out for the Flyers. Hartnell’s meshed well with Ryan Johansen and emerged as a leader and top-line threat in Columbus. Umberger has been a possession drain and not productive offensively. A weird trade when it was made, it looks odder today for Philadelphia.

It’s hard enough being a rookie in the NHL. Imagine going from college to the pros, being put on a line with Rick Nash, asked to play out of position and having to win faceoffs for the first time in years? The results: Hayes is last in the NHL on the draw at under 25 per cent. “It’s kind of embarrassing,” he said. 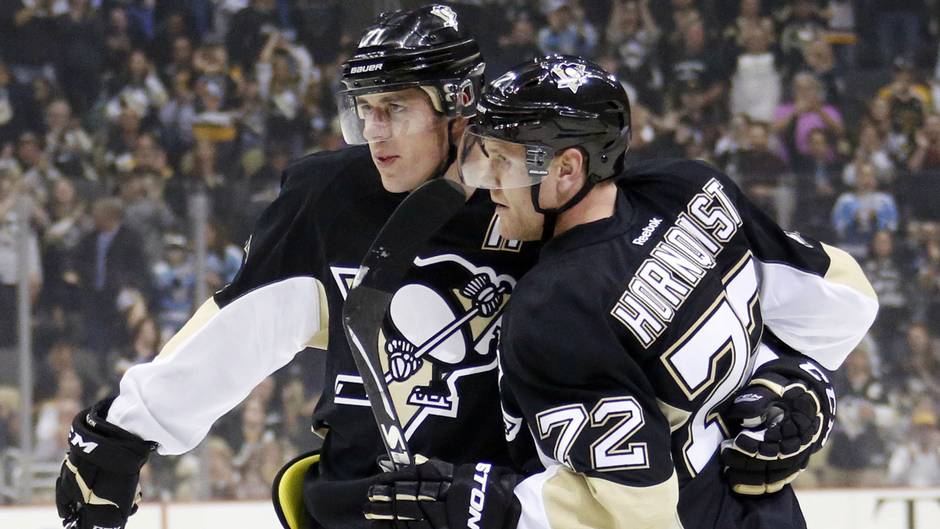 In general, the impact of faceoffs is overstated during NHL broadcasts, but here’s a quirk that’s worth keeping in mind: A team on a power play is quite a bit more likely to win the draw.

On average last season, teams playing 5-on-4 won 54.1 per cent of faceoffs. So far this year, it’s in right about the same spot.

That could be that the better faceoff players are on power plays compared to penalty kills. Or it simply might be that having the extra forward in the circle helps win disputed draws.

Some teams take this talent to an extreme. Pittsburgh, the top power-play team in the NHL right now, has won 59.2 per cent of its draws on the man advantage going back to the start of last year.

Arizona isn’t far behind, and the Coyotes have a surprisingly strong power play despite having few stars.

A big part of power-play success in the NHL is simply controlling the zone and generating as many chances as possible, which is why shot-attempt percentage is often used to gauge its effectiveness. And there’s a correlation between winning faceoffs on the power play and a team’s share of shot attempts – more so than at even strength.

Having a faceoff ace that can also lead your top power play unit – such as Chicago’s Jonathan Toews – is a great asset to have, in other words. And coaches should demand players win more than half of their draws on the man advantage.