The London Knights can call themselves the best team in the Canadian Hockey League.

Matthew Tkachuk scored his second goal of the game 7 minutes 49 seconds into overtime as the Knights captured the 2016 Memorial Cup on Sunday by downing the Rouyn-Noranda Huskies 3-2.

It's London's second Memorial Cup, with its other coming in 2005.

Christian Dvorak also scored for the Knights, who entered the final on a 16-game win streak. Tyler Parsons made 29 saves.

London's Mitchell Marner was chosen the tournament's most valuable player.

The QMJHL champions looked strong for the opening couple minutes, but it was London's Max Jones who got the first real scoring chance after beating a Huskies defender to the outside to get in alone on Marchand, who was there to make a pad save.

The pace stayed fast through the first 10 minutes. Marner and Dvorak broke in on a 2-on-1, but Marchand was there to turn Marner away. The Huskies came right back down the ice and had their first real scoring opportunity, but Parsons got a quick glove out on Alexandre Fortin.

Gabriel Fontaine took the game's first penalty with 6:27 to go in the opening period as he laid out Aiden Jamieson behind London's net. But the top power play in the tournament wasn't able to capitalize despite spending the majority of the two minutes in Rouyn-Noranda's end.

The Knights led 11-6 in shots after 20 minutes, but failed to score a first-period goal for the first time all tournament. Rouyn-Noranda seemed to have many of the 7,384 fans at Enmax Centrium rooting in its favour even though the Huskies eliminated the host Red Deer Rebels in the semi-final.

Jones drew a penalty 4:55 into the second period on A.J. Greer for roughing and was slow to get up on the play before leaving the ice on his own.

Aaron Berisha had a great chance out front of the net to put the OHL champions ahead, but Marchand robbed him in tight to keep the game goalless.

Tkachuk finally opened the scoring with 10:41 to play in the second, tipping in a saucer pass out of the air from Marner. The lead only lasted 15 seconds as Perron beat Parsons from the goal crease off a pretty feed from Timo Meier, who circled the net before finding his captain.

Marner took a shift pushing three minutes long late in the second in an attempt to put the Knights back up.

Nantel collided with a player in the final two minutes of the second and had to be helped off the ice. He appeared to be favouring his right knee, but returned for the third.

Jacob Graves took a tripping penalty, leading to Rouyn-Noranda's first power play of the game. Parsons came up big on it, once going post to post to post while keeping the puck out and the game tied 1-1 heading into the third period. Shots were 16-10 Huskies in the second.

The goalie battle continued to start the third period as both came up huge in the opening minutes.

The Knights were forced to take a timeout 4:11 into the period as Rouyn-Noranda kept up its pressure and London was caught with tired legs on an icing.

Nantel scored 9:13 into the third off a pass from Fortin to give the Huskies a 2-1 lead and London's first deficit of the entire tournament.

Tkachuk got cross-checked up high by Fontaine with 8:22 to play, leading to a brief 5-on-3 for London. The Huskies killed it off, though.

Dvorak came through for the Knights with the tying goal with 4:11 to play, taking a back-hand pass from Berisha and putting it blocker side on Marchand. It was his tournament-leading seventh goal at the Memorial Cup.

Marner almost ended the game in the final minute but hit the crossbar with a wrist shot from between the face-off circles. Shots were 30-27 London after regulation.

Jake DeBrusk, one of the many players at Memorial Cup with an NHL bloodline
May 24, 2016 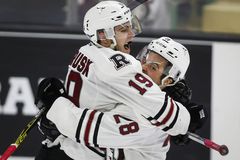 Red Deer Rebels still have a cause after being ousted from WHL playoffs
May 18, 2016 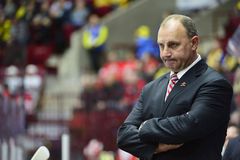 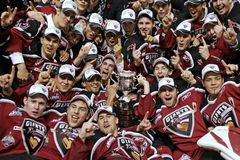