It has been 10 years since Steve Moore's NHL career ended with an attack by former Vancouver Canucks forward Todd Bertuzzi.

The 35-year-old Moore says he still suffers from headaches and low energy, even if he feels better overall and wants to get on with his life.

But there has been no closure for the former Colorado Avalanche centre, whose $38-million dollar lawsuit against Bertuzzi and the Canucks is still in the courts after numerous delays.

A trial date has been set for Sept. 8.

Moore, a rookie on a powerhouse Avalanche team, still remembers that game on March 8, 2004, and the devastating effect it had on his career.

"I think about it at times like this," Moore said Friday in a phone interview with The Canadian Press. "When the anniversary comes around, it's hard not to reflect on the impact this has had on my life, which is dramatic.

"At the same time I think a lot about how grateful I am that this wasn't worse. Every time I watch it I have the same reaction other people have, which is shock and disgust. It's just a little stronger when it's yourself you're looking at and when you're aware of everything that happened in the three weeks leading up to it — the threats and all those things."

It all started on Feb. 16, 2004, when Moore flattened Canucks captain Markus Naslund with an open ice hit that put Vancouver's scoring star out with a concussion but was deemed legal by the NHL.

Major retaliation was expected. Vancouver's Brad May was quoted as saying there was a "bounty" on Moore's head. But when the teams next met on March 3, with NHL commissioner Gary Bettman in the house, there were no incidents.

The fireworks came in their March 8 game, a 9-2 Colorado win.

Moore squared off against Matt Cooke in the first period, a fight that was considered a draw. It appeared that was the end of if.

But things got nasty in the third frame. Moore was challenged again. He turned away. Bertuzzi skated up behind him, tugging on his jersey, then punching him from behind and falling on top of him as other players piled in.

Moore lay motionless on the ice in a pool of blood before being stretchered off and taken to hospital.

The diagnosis was a concussion and three fractured vertebrae.

Bertuzzi was suspended for the rest of the regular season and the playoffs, which cost him about $502,000, and he didn't play during the 2004-05 lockout season. But he was reinstated for the 2005-06 campaign and has since continued his career, most recently with Detroit. He also pleaded guilty to a criminal charge of assault causing bodily harm and was sentenced in 2006 to a year's probation and 80 hours of community service.

There was also Bertuzzi's tearful apology on television.

But nothing could fully heal Moore's wounds.

After five years visiting the best specialists he could find, he was told he had made a remarkable recovery but none would give him clearance to play hockey again. His career was over.

"That was a very difficult time for me," he said. "It took a heck of a lot longer than I expected, but I was expecting to go back and I never thought about anything other than returning to play."

He has since started the Steve Moore Foundation to help people with head and neck injuries.

"Over the last few years, with the number of concussion injuries, especially with high-profile players, the public has been educated in a major way, but we still have a long way to go not just in making people aware of this, but in avoiding them and treating them," he said.

While Moore's foundation keeps him busy, he is also still dealing with the lawsuit, which could set a standard for determining responsibility for on-ice behaviour and injuries.

Moore said the suit was not so much about the money as being compensated for the loss of his dreams.

When Moore was injured, he was in his first full NHL season. He had five goals and seven assists in 57 games, but injuries had seen him move up from the fourth line to regular duty with stars like Joe Sakic and Paul Kariya.

"I lost my entire career in my rookie year," he said. "I think any player put in that situation would do the same thing.

"I can't recover anything else. I can't recover my career, the experience of living out my dream from the time I was two and half years old of playing in the NHL."

He said the injury cost him all the good things about being an NHL player: rewarding himself and his family for the hours they put in to get him there, the chance to skate in the playoffs and maybe even win a Stanley Cup, or even the chance to be an inspiration to youngsters hoping to be in the league one day.

"Everything I watched my peers go through the last 10 years," he said. "I've watched the careers they've had and I can't get any of that back."

Bertuzzi has alleged the Canucks' then-coach Marc Crawford urged his players to make Moore "pay the price," while Crawford has claimed Bertuzzi disobeyed instructions to get off the ice before Moore was attacked.

Asked if he has forgiven Bertuzzi, Moore spoke instead of being frustrated at the repeated delays in the trial and the resistance put up by the opposing side in the lawsuit.

"I'm a very forgiving person," said Moore, who lives in Toronto with his wife and two small children. "Everyone saw what happened on March 8, 2004, but what they haven't seen in what's gone on since then.

"To me, it's just been a continuation of what happened, just off ice and away from the cameras. It's not a situation that happened 10 years ago and it's over and everything's been resolved and moved on.

"There's nobody that would like to move on more than me. Every day I try to move on, and I have moved on in other areas of my life, but this isn't over." 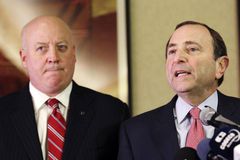 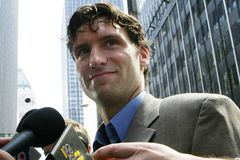