The Vancouver Canucks face another difficult season in 2016-17 as the team tries to build a contender and management's focus is divided between the longer term and the immediate outlook.

There is hope in the coming NHL draft, team managers say, where the Canucks have about a one-in-three chance to get a top-three pick and draft a player who could make an impact next season. The Canucks also have a reasonable amount of salary cap space, which it could use to attract a player such as Boston's Loui Eriksson. The right winger turns 31 in July, and might join Daniel and Henrik Sedin to bolster the team's first line.

But the bigger message coming out of the end of Vancouver's season was there will likely be more pain. On Tuesday morning, no one in management uttered those precise words, but they didn't offer much tangible hope for a swift rebound from a season that saw the Canucks finish third-last in the NHL and score the fewest goals in franchise history.

Trevor Linden, the team's president of hockey operations, was asked about rebuilding at the same time that there's an increasing number of empty seats at Rogers Arena. He emphasized the painstaking work of drafting and developing players. "There is no other option," he said.

One of the best Canucks prospects, considered a potential first-line player, is 19-year-old Brock Boeser, drafted 23rd last June. He will watch next year's NHL season from the University of North Dakota, where he will return as a sophomore to help the school defend the Frozen Four NCAA title it won this past weekend. Boeser had six points in the final two games, and his 27 goals for the season were one more than Zach Parise's freshman season at North Dakota.

In an interview on Tuesday, Boeser said former North Dakota players such as Parise and T.J. Oshie benefited from several seasons in college before making the professional leap.

"Another year can definitely help me out a lot," Boeser said. "Talking to the Canucks, they agreed with me."

Vancouver's other top collegiate prospect is Thatcher Demko, a 20-year-old who was a finalist for Division I player of the year and won top goaltender. He's a junior at Boston College and the Canucks want to sign him soon. If he plays his senior season, however, he could become a free agent. The Canucks drafted Demko in 2014, in the second round; the team sees him, eventually, as its starting goaltender.

Demko might be discouraged by the fact that 26-year-old Jacob Markstrom is emerging as Vancouver's starter for the foreseeable future. Veteran Ryan Miller is expected back for the final year of his contract, and the two will be a tandem, after which Markstrom is expected to take over.

The Canucks' long-range view was clear when Linden spoke about free agency this summer. Three times he mentioned balancing any signings with keeping salary cap room available for 2017-18 – the season after next. At that point he will need to sign Markstrom, an unrestricted free agent, and restricted free agents Bo Horvat and Ben Hutton.

The Canucks have several possibilities in Europe who might fit in next season. One is Anton Rodin, a 25-year-old winger who was MVP of the Swedish league. Another is 26-year-old Philip Larsen, a defenceman playing in the KHL.

"We think he [Larsen] could potentially run a power play for us next year," Benning said.

The big hope – and big worry – is the draft. The Canucks sit at No. 3 and have an 11.5-per-cent shot at No. 1. But the greater likelihood – odds of roughly two-in-three – is the Canucks fall to fourth, fifth or sixth.

"I don't want to get too excited," Linden said. "I have not touched the [draft] simulator. I've watched people touch the simulator and it's kind of fun. There's nothing we can do about it." 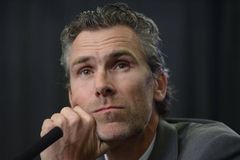 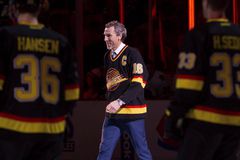 How the Vancouver Canucks have been trying to rebuild without pain
March 31, 2016 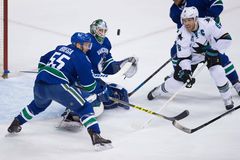