Mike Stothers is counting the days until he has to say goodbye to Morgan Rielly.

Rielly has two departure options: The first, and most likely, one includes an invitation to Team Canada's training camp in December and a spot on the Canadian roster for the world junior championships in Ufa, Russia, during the Christmas holidays.

"When he goes to the world junior, we're going to miss him — that's for sure," said Stothers, convinced the rearguard will make the Canadian squad.

Rielly's second option is an invitation to the Toronto Maple Leafs training camp, pending the end of the NHL lockout. The Leafs chose the 18-year-old West Vancouver, B.C., native fifth overall in last June's draft, even though he missed 54 games in the 2011-12 season with a knee injury.

Stothers is also convinced Toronto will give Rielly "a good, long, hard look" if the NHL gets around to playing this season.

"I'm actually anxious to see what he could do, being as good a player as he is, playing at a higher level with higher-level players," Stothers said.

The coach had just watched Rielly score the winning goal, with 4:51 remaining in the game, in Moose Jaw's 2-1 victory over the Vancouver Giants on Wednesday night. Rielly launched the play and then finished it as he intercepted a pass just inside his club's blue line, he raced with the puck towards the other end on a two-on-one that Vancouver neutralized and then put in his own rebound.

Rielly also helped the Warriors limit the Giants to seven shots in the first two periods as the visitors outshot the hosts 34-16 on the night. According to Stothers, it was a typical showing from Rielly.

"We maybe get a little spoiled from what we see out of Morgs on a daily basis, on a game-to-game basis," Stothers said. "But I think he just showed why he's a difference-maker and a game-breaker, and a guy that is worthy of being picked fifth overall."

Rielly's winning goal came in the second of back-to-back games in Victoria and Vancouver. The Warriors (10-11-3-4) won both contests.

Against the Giants, Rielly played in all situations, on both the left and right sides of the blue line. He hit the post on a shorthanded breakaway in the first minute of the third period, created dangerous offensive situations with adept stickhandling and simple flips of the puck toward the net, and calmly skated the puck out of harm's way in his own end on a number of occasions.

He now has five goals and 25 assists in 28 games. With his 30 points, he has figured in almost half of Moose Jaw's 72 goals on the season. Accordingly, Stothers, who compares Rielly to former New York Rangers star Brian Leetch, places few restrictions on the offensive defenceman.

"We don't generate a lot of offence," Stothers said. "Scoring doesn't come easy to us as a collective group. When you break it all down, Morgs is in a great percentage of (the scoring plays), whether it's regular shift or power play. He's a big piece of our puzzle."

But Rielly is taking nothing for granted with his chances of suiting up in Russia, even though the loss of Everett Silvertips defenceman Ryan Murray to a season-ending shoulder injury has opened up a roster spot.

"There's a whole lot of good blue-liners going in," said Rielly. "So that's a pretty tough team to make. Obviously, it hurts the team with him going down with an injury, but I don't think it changes anything for me."

Rielly — who played for the WHL's squad in the Subway Super Series against a Russian select team and also played for a Canadian squad in a summer series against Russia that replaced Team Canada's evaluation camp — said he wants to focus on playing well for Moose Jaw. But he admitted it's hard not to concentrate on the possibility of playing in the world junior tourney.

"I just try to play my game and, hopefully, get some of the bounces," he said. "If I have the honour to go to camp, that'd be great. Any time you're in that conversation with some big-name prospects, it's always nice."

In the meantime, he is trying to focus on being a leader for the Warriors. Contending the knee injury and high draft selection have not changed him, he does not want to think too much about the chance of playing for the Maple Leafs, either, although he had hoped to attend their training camp.

"Obviously, that didn't happen, but I wasn't too worried about trying to play on that team as an 18-year-old," he said. "It's pretty hard to make the jump from junior to pro. I was hoping to get a chance to go to camp. It didn't happen but, hopefully, I get that chance in the future."

Coach Stothers has little doubt that he will. 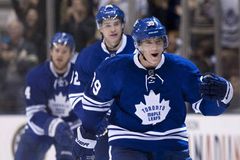