A new women's hockey league promises to pay its players and reveal the source of the money soon.

"Each player will negotiate their salary with their corresponding GM," Rylan, the league's commissioner, told The Canadian Press from New York.

The National Women's Hockey League will consist of the Buffalo Beauts, Boston Pride, New York Riveters and Connecticut Whale. It will carry the same name as the league that operated 1999 to 2007 with Canadian teams and one American club, the Minnesota Whitecaps.

Lawyers for the new circuit applied Feb. 2 to the U.S. Patent and Trademark office for the rights to "NWHL."

"I'm 110 per cent confident I have that trademark," Rylan said.

With salaries for coaches and GMs, arena and ice costs, equipment and travel, a conservative estimate for the league's annual operating budget is $2 million annually.

"We're working on getting ownership in place as the league is set up as a franchise model," said Rylan. "There will be owners coming in and taking over responsibility for the team's finances as well as league sponsors who'll also alleviate the financial burdens of all the organizations."

Rylan played hockey and studied sports management at Northeastern University. She formerly worked for the NHL Network in production.

Ruggiero, a four-time Olympian, is on the league's advisory board. She played in the former NWHL for Montreal.

Rylan says arenas have been secured in the four cities and ice time will be donated. A partnership with US Coachways, a bus line, has also been struck, she added.

The four team GMs have been hired but no coaches yet, Rylan said. She added multi-year deals with sponsors have been signed.

"We'll actually be announcing our first owner next week as well," Rylan said. "The hard details as far as ownership groups, GMs, players as they start to sign, those will all be released in the upcoming weeks."

Being paid to play has been a distant dream for women who've graduated from their college teams.

Canadian and American players at the women's world championship in Malmo, Sweden, say they've received an e-mail about the league and are awaiting more details.

"It's very inviting what we've heard about it, but I think everybody just needs to get more research on it and learn more about the league," said American goaltender Jessie Vetter.

The Canadian Women's Hockey League is the closest graduated players have to a pro league although it's not yet in a position to pay players.

The five-team circuit, with a club based in Boston, operates on the model of MLS soccer where the league owns the franchises.

Coaches are paid a nominal amount. Arena and most travel costs are covered. But unless a player has an equipment sponsor, she buys her own equipment. She also pays for meals on the road.

Canadian forward Caroline Ouellette plays for the CWHL's Montreal Stars. She's one of the league's few players with an equipment sponsor.

A league that would pay her is attractive, but the 35-year-old remains skeptical until she knows how the circuit will finance itself.

"They're promising to pay the players," Ouellette said. "That's what we're striving for. It's getting harder and harder every year to still have to pay to play.

"The players are open to hearing about the new league and seeing how it's going to work, but often I feel there are rumours about a new league coming on board and it never really happens. Maybe I'm pessimistic."

Added Rylan: "I think everybody has the right to be skeptical because this is something that's been talked about for a long time. I've done my research and I know the other options that have proven to be flops. This is structured to be a success."

A new league paying its players could cost the CWHL it's top performers.

"It has come to the league's attention that an organization called the NWHL has announced that it will begin operations in April of 2015," the CWHL said in a statement on its website."Rest assured, the CWHL is taking all necessary steps and measures to protect its interests.

"Please know that the CWHL, first and foremost, is committed to growing women's hockey in both Canada and the United States."

Editor's Note:This is a corrected story. A previous version had Ruggiero as the NWHL commissioner instead of Rylan. 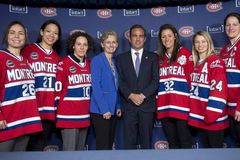 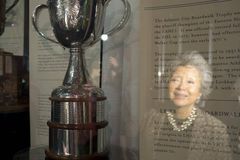