With no end in sight to the NHL lockout, the league is doing all it can to ease the concerns of its sponsors.

A small group of key clients gathered Wednesday afternoon in Toronto for an audience with chief operating officer John Collins, who provided an update on labour negotiations and took questions from participants.

A source indicated that representatives from Molson, Canadian Tire, Sport Chek, Kraft, Sirius XM and Scotiabank participated in the meeting. One attendee called the session "productive" and applauded Collins for taking part.

"They were very transparent with us," said the source, who requested anonymity. "I was looking around the room and the long-term, cumulative contract dollars around the table were probably at the $100-million mark. It's a significant chunk of change for the league."

The sponsors are an important group for the NHL to interact with during the labour dispute. Commissioner Gary Bettman and deputy commissioner Bill Daly have held a series of conference calls with business partners in recent months in an effort to keep everyone informed.

Sponsorships played a significant role in the immense growth the league enjoyed after the 2004-'05 lockout. Twenty-two new partners signed on with the NHL over that period as it moved towards a calendar built around signature events, such as the Winter Classic and revamped all-star weekend.

With the NHL on hold, sponsors have been forced to abandon plans to activate against the league and some have started channelling money into other projects. Typically, campaigns and product launches take months to pull together — posing a problem for league partners given the uncertainty brought on by the lockout.

"We don't know when the end line is," said the source.

At this point, no one does.

Talks broke off quickly in New York on Tuesday and Donald Fehr, the NHLPA's executive director, returned to Toronto that night. Bettman and Daly remain in New York and the sides have made no formal plans to meet again.

Negotiations have yet to even really get off the ground despite the fact the lockout is almost three weeks old and the scheduled Oct. 11 start to the regular season will almost certainly be postponed before the end of the week.

The primary reason behind the standoff is that the NHL wants to see salaries reduced immediately while the union believes all existing contracts should be honoured. As a result, the NHLPA is unwilling to consider an immediate rollback or any system that would see players pay more money in escrow.

"The owners have signed all these individual contracts and now they want to change the rules so the players don't get what they're supposed to be paid under the contracts," Fehr told The Canadian Press this week. "How do you deal with that? Does a player get to say `Well, OK, my salary loss was more than I thought it would be, I can leave?'

"Does he have to go to work if they're not going to pay him what they say they were? This is pretty basic stuff here."

The league, meanwhile, is calling for another proposal from the players. The NHLPA tabled its original offer Aug. 14 — and amended it days before the lockout started at midnight ET on Sept. 15 — and the NHL believes it's time to see something new.

"We're trying to be as creative as we can be and we want to think of ways to approach the issue," Daly said Tuesday. "But, unless and until we hear from them and they make some movement or show some willingness to compromise I'm not sure how we get this done." 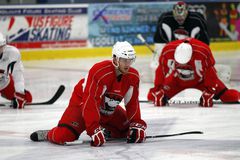