A wave of optimism gave way to tension as the NHL and NHL Players' Association spent a second straight day trying to hammer out a collective bargaining agreement.

The sides exchanged proposals during a series of meetings Wednesday that stretched past midnight Eastern, according to sources, in a bid to close the final gap in negotiations that have spanned more than five months.

The urgency was evident as a group of six league owners shuffled between internal meetings and short sessions with players and union staff at a hotel in midtown Manhattan. At one point, Boston Bruins owner Jeremy Jacobs could be seen having an animated conversation with deputy commissioner Bill Daly outside the negotiating room. Meantime, players paced the halls while speaking on their cellphones.

Even though the specific details of the new offers weren't known, one aspect revealed another hurdle the sides have to cross — the length of the deal. The league's proposal called for a 10-year term while the NHLPA continued to favour a shorter contract, according to sources.

With tensions rising, commissioner Gary Bettman and NHLPA executive director Donald Fehr kept themselves out of negotiation sessions for a second straight day. However, Bettman did provide a brief update to reporters after a two-hour gathering of the Board of Governors, saying he was "pleased" with how things were progressing.

That was about all he was willing to reveal.

"We are pleased with the process that is ongoing and out of respect for that process I don't have anything else to say and I'm not going to take any questions," said Bettman.

The two sides have cleared their schedules for the rest of the week after successfully getting an adjournment from Quebec Labour Board hearings that had been scheduled in Montreal for Thursday and Friday. That panel will only hear arguments about the legality of locking out members of the Canadiens if a deal can't be reached in the near future.

There was a sense that remained a possibility following the first gathering of NHL owners since the lockout was enacted in September.

"We feel good about the information we got," said Columbus Blue Jackets president John Davidson.

Toronto Maple Leafs minority owner Larry Tanenbaum is one of six owners who became involved in the talks this week.

"As long as we're talking, we're hopeful," he said.

According to sources, the owners discussed a possible season that would span 50-plus games. There had been talk of a 60-game schedule in the event of a labour settlement, but the feeling among the group was that it would be too ambitious at this stage.

Progress appeared to be made during more than eight hours of meetings on Tuesday that ended with NHLPA special counsel Steve Fehr describing it as the best day yet in talks. It was difficult to carry that momentum through a second long day, especially with the league and union trading specific proposals and looking for compromise.

After the NHLPA tabled an offer late last month, the sides were separated by $182 million over five years. Even though they had both proposed a 50-50 split of revenues, the union had asked for $393 million in deferred transition payments, while the NHL was willing to give up $211 million.

The NHL's third lockout in the last 20 years has already resulted in the cancellation of 422 regular-season games through Dec. 14, plus the Winter Classic and all-star game. It remains the only North American pro sports league to lose an entire year to a work stoppage after having the 2004-05 season wiped out. 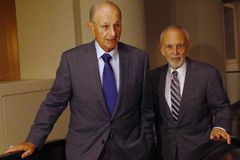