There are two ways to look at the opening offer made by the NHL owners to the players as their labour negotiations became serious last week.

One was expressed by two people connected to the management side of the issue, a veteran governor and a former governor who is keeping a close watch on the negotiations. Both requested anonymity because NHL commissioner Gary Bettman does not take kindly to those who publicly discuss league business.

Both sources admitted the league is doing much better financially than it was just before the last collective agreement ended in 2004 with a season-long lockout. But both said there are still serious problems with some teams – six by the estimate of the former governor.

"It's not nearly as dire as the last time, obviously, because we do have a cap system in place," the current governor said. "But it needs to be adjusted."

Which is why both management insiders say they are scratching their heads at the visceral reaction to the NHL owners' opening offer.

When it came out the league demanded a cut of the players' share of hockey-related revenue (HRR) from 57 per cent to 46, with further cuts through re-defining HRR, limiting player contracts to five years, eliminating salary arbitration and increasing players' eligibility for unrestricted free agency to 10 years, there was no shortage of declarations another season-long lockout was at hand.

Wait a minute, the governor said, this round of negotiations is about adjusting the system. This is not about blowing up one system and forcing in another while breaking the union, as happened in 2004-05.

However, on the players' side of the equation this is not a simple negotiation about sharing a pie equally but about management still demanding, as it did eight years ago, a fundamental change in the system.

There are many on the union side who see this as confirmation the owners are ready once again to shutter their arenas in order not only to get enough concessions from the players to ensure their financially weak teams start raking in more money but to ensure the rich get richer as well. The soothing comparison to real-estate haggling is considered the owners' spin once they saw the negative reaction to their opening offer.

There was no interest in discussing how a league with record revenue in the last seven consecutive years – rising 63 per cent to $3.3-billion (U.S.) this year – could deal with six problem franchises out of 30.

Looked at in total, the league's demands take an individual owner's control of his team out of his hands. Hence the demand for all contracts to be no more than five years in length and to eliminate signing bonuses, one of the only areas under the salary cap where owners can be creative.

There is also a suspicion the owners regard a lockout as the first alternative rather than a last resort after negotiations in good faith. Why else would they rush last winter to cancel the European tours by NHL teams in the preseason that became a custom in recent years? The only side talking about a work stoppage ruining the tours was the owners.

However, the former governor, while hopeful a deal can be reached with minimum disruption, sounded the alarm.

He brought up the 1994 Major League Baseball season which began without a collective agreement. Then, the players' union, which Fehr headed at the time, went on strike in August and eventually the World Series was cancelled.

The NHL owners, the former governor said, will never open the season without a collective agreement in place, which means a bumpy ride lies ahead. 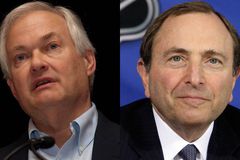