If all this scoring keeps up, the NHL coaches' union will have to call an emergency meeting.

Alexander Ovechkin opened the season with back-to-back hat tricks for a total of seven of the 11 goals his Washington Capitals have scored. The last time anyone did that was 100 years ago in 1917-18, the NHL's first season.

Speaking of 100 years ago, the last time the Maple Leafs scored seven goals in consecutive games to open a season was also in 1917-18 when they were known as the Toronto Arenas.

The Buffalo Sabres and the New York Islanders combined to score four short-handed goals on Saturday.

Even an Australian scored. Nathan Walker of the Capitals became the first Aussie to do so in the NHL when he slipped one in amid Ovechkin's outburst. Flaming dingos, mate! Heck, forget the Australian. Zach Hyman scored twice for the Maple Leafs on Saturday when they blew a four-goal lead but came back to beat the New York Rangers 8-5 in their home opener. That would be the same allegedly stone-handed Zach Hyman certain brainiacs in the media were chiding Leafs coach Mike Babcock about, for his decision to play him with Auston Matthews.

"He has a lot more skill than you people give him credit for," Babcock said. "That's great for him. He lives in this town, his family lives in this town. Whether he reads it or not, someone is reading it and telling him about it. After a while maybe that bangs on you if you're not strong. I just tell him he's a good player and to play good."

A good part of the reason for all the goals is found in that stat, posted by the Islanders and Sabres, of four short-handed goals. The introduction of new rules, such as a minor penalty if a coach's challenge on a potentially offside goal is unsuccessful, and a new emphasis on certain infractions, such as slashing, mean more penalties are being called. Combine that with the usual time it takes at the start of the season for players to settle into the defensive side of their game and there is lots of entertainment for the fans.

Rangers head coach Alain Vigneault, who described the game as "pond hockey," challenged what proved to be the Leafs' winning goal, by Tyler Bozak in the third period, as offside. He lost and a minor penalty for delay of game was issued. Near the end of that penalty, Rangers centre Kevin Hayes took one of those new-fangled slashing penalties and Leo Komarov scored on the power play for the Leafs to ice the game.

However, no one has any doubt the no-fun brigade – the 31 NHL head coaches and their assistants – will soon strangle the life out of this.

"It's kind of fun, eh?" Babcock said sarcastically after watching his players take a 5-1 lead, give it back and then snatch back the win. "But it's dumb. So, you have to decide. We had lots of guys take their turn turning it over and being silly and doing crazy things."

But Babcock had to admit his group of young players is showing the firepower it often just hinted at last season. More often than not through the first half of last season a blown lead stayed blown.

"I don't think we can keep this pace going. That's unheard of. We're going to have to crack down defensively," Jake Gardiner said. That would be the same Jake Gardiner who has long driven his coaches crazy with his all-offence-all-the-time approach to playing defence. Even he knows what's coming.

"It's interesting you say that," Leafs forward James van Riemsdyk said. "I think you have some rule changes, more penalties being called throughout the league. I think players and coaches alike are figuring it out through all that stuff.

"It's good for a buzz for the game when there are lots of goals going in. I don't anticipate it to stick."

Still, it makes things intriguing for Thanksgiving night. The Blackhawks are in town Monday with their 15 goals-for. Funny thing, though. They only have allowed two, so the Leafs will need to fix those defensive wobbles fast. 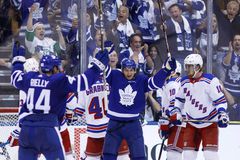 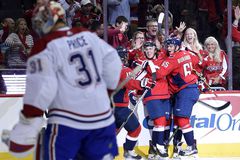 Flames net six goals to defeat Jets after being shut out in season opener
October 8, 2017 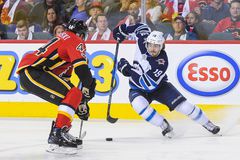