Hope you weren't planning on catching hockey on the tube this fall. The sports TV networks will likely be dusting off their catalogue of canned programming until at least U.S. Thanksgiving. That's after the release of the reported details of the league's pitch to its players for the next collective agreement.

The NHL wants five-year limits on player contracts, a 46-per-cent share of hockey-related revenues for players, a 20-per-cent rollback on salaries, a 10-year waiting period for free agency and presumably, a return to tube skates. The rollback theme underscored the pessimism we'd been hearing from NHL teams about the prospect of seeing Hockey Night In Canada the first week of October.

For now, the carriers of NHL hockey in Canada are taking a restrained approach to the programming vacuum.

"We are exploring programming options in case the NHL season is delayed," says Sportsnet spokeswoman Jennifer Neziol, "but have nothing to confirm at this time. Our hope is that the CBA discussions continue to go well and that we will have an NHL season that begins on time."

TSN's Greg McIsaac said, "It is still early in the negotiation process. At this point we are monitoring developments. Like all hockey fans we are hopeful that an agreement can be worked out as soon as possible."

"Negotiations have just begun and we don't speculate," says CBC spokesman Chuck Thompson. "CBC has contingency plans for all areas of programming – it's what smart broadcasters do."

Evidently, the smartest thing a broadcaster can do is not ruffle the NHL's feathers with negotiations for a new national TV contract as Gary Bettman concludes another showdown with the players. Owners are under a gag order not to talk, and it would be prudent to do the same if you're a TV network.

One broadcast change from the 2004-05 lockout is there is a considerable TV component at play for the NHL if a lockout goes too far. Eight years ago, NBC, which had made no payments to the league for its rights, understood it might have no content and did not pressure the NHL for an early CBA settlement.

This time, the league has much invested in its partnership with HBO on 24/7, a sports-documentary program that leads into the much-ballyhooed Detroit/Toronto Winter Classic on NBC. For that series to go as planned, filming must start in late November or early December. Losing the HBO connection would be a blow to the prestige the NHL has built of late with its new initiatives.

That's reminiscent of what happened in the 1994-95 lockout when Fox TV had paid a significant rights fee to start carrying games in January of 1995. The obligation to pacify its U.S. TV partner pushed the NHL to settle earlier than it wanted and, in some ways, created the conditions for the disastrous lockout 10 years later.

Meanwhile, the leak of the CBA offer shows Bettman still grimly pursuing his 1990s Double E (expansion and equity) agenda of keeping a level playing field for all teams. Having come to salary caps later than everyone else (except Major League Baseball), the NHL has a single-minded determination to make the salary cap solution work. In this offer, Bettman seems intent on creating something akin to a North Korean controlled economy in hockey that keeps the true money earners and the twerps (i.e., the teams Bettman brought in via expansion) tightly bunched in mediocrity around a salary floor and ceiling.

Unfortunately for the NHL, the biz has moved on from the parity party. Sports today isn't about expansion fees and equity. It's about huge communications dollars seeking out broadcast properties to keep the current broadcast paradigm alive. Seeing the huge money available to sports that control their TV product, NCAA conferences such as the Pac 12 are starting their own networks. Regional MLB deals are vaulting to the $5-billion range (the estimated value when the Los Angeles Dodgers do their next regional deal).

What about parity? Won't domination by the Yankees and Lakers turn off fans? English soccer' TV product is dominated by five or six super teams, and it has never been more popular. The NBA is moving toward star-based teams in large markets, and ratings have never been better. The parity notion may sell for the Obama re-election campaign, but sports programmers have no desire to see the Carolina Hurricanes or Kansas City Royals win titles.

Pollyannas see the NHL offer as a first gambit from the league; those who've paid attention know that Bettman loves CBA hardball the way Donald Trump loves the comb-over. Pedal to the metal, baby. That vision stuff is for sissies. And why not? If you'd seen the players snap like balsa wood at the first sign of pressure in 2004-05, why would you assume that NHLPA executive director Donald Fehr is going to make the hockey players any tougher negotiators this time?

The NHL is gambling that TV viewers who love hockey will once again put aside their favourite sport for an extended period of time so the league can try another stab at the sports industry paradigm Bettman encountered when he took over as commissioner in 1993. And he'll be darned if he doesn't get it right this time. He has the votes among owners to go long term.

We could go on, but the NHL and its players will do that for us in the next months. In the meantime, get ready for ESPN Classics, 30 for 30 documentaries and Canadian movie of the week on Saturdays.

Best line on the Joe Paterno scandal at Penn State football from Michael Rosenberg of the Detroit Free Press who tweeted that Paterno's statue at the school shouldn't be taken down but just turned so it's looking the other way. 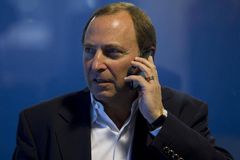